Thursday 30th.   Low cloud and  increasingly windy conditions as the wind veered from the SE into  the SSW, meant it was a non-flying day.

Friday 31st.  Another cloudy and windy day as the moderate to fresh SSW'ly became increasingly gusty around the middle of the day ruling out any flying.

Saturday 1st February.  The cloudy skies remained as the wind became even stronger, being fresh from the WSW/SW with gusts into the low 40 kts, so it was again a non-flying day.  The evening proved to be more ameanable as members assembled to hear Steve Thompson give a talk on airspeed indicators and altimeters while earlier, Toby Wilson set up his virtual gliding equipment in the clubhouse.

Sunday 2nd.   A day of rain, 5.8 mm falling, low cloud and light to moderate ESE'ly winds that veered into the SW late in the day as a clearence arrived, conspired to extend the run of non-flying days to four.

Monday 3rd.  A moderate and at times moderate to fresh W'ly provided  a hill soaring and wave day, the wave flights being achieved from mid afternoon onwards.   All of the day's 8 winch launches led to flights of over 30 minutes, with 2 of these over an hour.  Jesper Mjels, flying Astir DPO had the longest flight, 1:25, and also recorded the highest altitude, 10,000' asl, with Fred Brown and Chris Thirkell in K21 JVZ, having a flight of 1:04, during which they climbed to around 5,000' asl.  The high flyers were joined by Brian Wise, who. of the last flight of the day, climbed to around 6,000' asl while flying K21 KLW solo for 54 minutes.  Paul Whitehead and M Clarke in KLW,  Colin Troise and Bill Payton in JVZ and Tony Drury, flying KLW solo, all had flights of between 50 and 52 minutes.

Tuesday 4th.  A moderate and gusty NW'ly meant a non-flying day, although by the end of the afternoon conditions had calmed down as high pressure started to become established over the UK.

Wednesday 5th.  A very light WSW'ly opened the day as the high pressure intensified, providing initially sunny skies although these were soon dulled by a high overcast that produced a nice corona around the sun.  The wind slowly picked up over the course of the day and after backing into the S, eventually settled down in the SW.  Operations were off runway 24 behind the Eurofox and 21 ATs resulted.  Early flight found little in the way of lift although pilots did report areas of zero that contributed to a maximum flight time of 34 minutes during the morning, this by day visitor Nobby Noble in  the DG303.  Conditions remained similar in the afternoon, although the strengthening but stll light to moderate wind continued to provide glimpses of wave and hill lift on the section of the main bowl between Lake Gormire and the A170 as it ascended the escarpment.  Both of these forms of lift were exploited by George Rowden in the Discus with a flgiht time of 59 minutes, the longest of the day. Only 2 other flights exceeded 30 minutes, Brian Wise taking First Flight pupil Keith Jones for 32 minutes off a mile high flight in K21 JVZ and Rob Bailey having 32 minutes in the Discus.  The recently returned Falke was also busy with 3 flights, the most noteworthy of which saw Paul Whitehead sign off Ron Beezer as a Motor Glider Instructor, so well done Ron.  After the end of flying Ron and a group of flying members retired to the Bar where Ron rang the Dishforth Bell to announce his achievement, as the following photo shows. 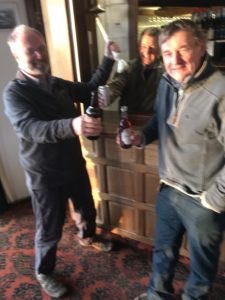