Wednesday 22nd.   The high pressure continued to decline slowly and the site continued to enjoy sunny skies and light winds, mainly from a WNW'ly direction, so take offs were from runway 24, with landings on 20.    The lack of any lift meant it was a good day for training although not for staying up, with nobody exceeding their launch height or indeed a flight time of 30 minutes,  Polly Whitehead, flying K21 KLW solo came closest with 26 minutes off a 3k' tow, while John Carter and David Watson had 25 minutes off a 4k' tow, a winter check in the DG1000, which I suspect included at least one spin.    Later Paul and Polly Whitehead had a winter check off a 2.6k' tow, while Andy Evans had the only other solo flight of the day's 10 ATs as he took K21 for a 22 minute ride.

Thursday 23rd.  The site again  basked in bright sunshine, which was more than could be said of the surronding lowlands which were shrouded in a shallow layer of fog, from which electricity pylons protruded.   The lack of any fields for a landing after a failed launch meant a delayed start to flying , this getting underway around 1245 hrs as the fog cleared, with John Carter and David Waring taking the first flight in K21 KLW off runway 24 into a light W'ly.  3 other ATs then followed with 2 being for the day's First Flight pupils, Fred Brown in KLW giving them flights of 27 and 21 minutes.  The last flight of the day saw John Carter and Mark Newburn take the DG1000 for a 4,7k' tow which resulted in the longest flight of  the day, 31 minutes.

Friday 24th.  North Yorkshire was again the recipient of bright sunshine, while much of the rest of the country continued to experience anticyclonic gloom, the high, now much reduced in central pressure, again providing a light WSW'ly.  Flying got underway off runway 24 with George Rowden taking the first of the day's 4 first flight pupils for a 21 minute flight in K21 KLW.  10 other ATs behind the Eurofox then followed with pilots enjoying smooth air and good visibility as the following photo from David Watson illustrates.

Pilots continued to enjoy the conditions until the low sun made landing  a problem around 1600 hrs with flying coming to an end.  In between times Mark Newburn did his best to fly as much of the available club fleet as possible, with a 27 minute flight in the DG303, a 29 minute flight in  Astir DPO and an 11 minute flight with Dave Watson in K21 KLW.   The 2 solo flights saw Mark take 4k' tows in an attempt to contact the wave which was evident, as the following photo shows, but in spite of going west of the East Coast Main Line and east of the site, only intriguing glimpses were encountered. 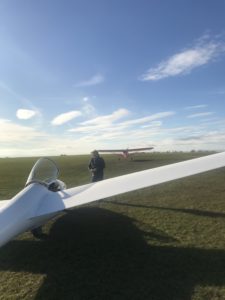 Around 1400 hrs, George Rowden's  flight with First Flight pupil Bob Hall, encountered some low level cloud development between the site and Thirsk that indicated the location of  some weak and transient  wave, the associated areas of lift extending the flight time to 30 minutes, the longest of the day.   After the end of flying the DG303 was derigged and trailered down to NYSailplanes for its ARC, and with the Discus and DG500 also off site,  the packing of the hangars was a bit of a doddle.