Sunday 19th.  The high pressure responsible for Saturday's flying weather remained in place and had intensified.  The result, in weather and flying terms, were blue skies, light winds, mainly from the WSW and 30 ATs off runway 24, the majority of the landings being on 20.    The other characteristic of the flying day was a lack of lift, so that none of the day's flights climbed above launch height, this applying to the longest flight of the day, Toby Wilson's 43 minutes in the DG1000 with Mile High pupil, Peter Broderick.  Only two other flights exceeded 30 minutes, Bruce Grain and Phil Turner having 33 minutes in the DG1000 off a 3,000' tow and Steve Thompson managing 31 minutes of the same tow height in his Discus.  Nora van Genugten was the only other private owner to rig and fly while Tony Drury flew the only other solo flight of the day in the DG303.    The other main feature of the day was the return of the Eurofox to tugging duties, the  opportunity being taken to re-aquaint a number of the club's tug pilots with this 120 HP version.

Monday 20th.  The high pressure remained in place, its central pressure of just over 1050 mb setting a number of UK records, so weather and flying characteristics resembled Sunday's.  The only semblance of a change being the wind direction, which was now S/SW, so operations were off runway 20.   The lack of lift again resulted in an up, round and down day, none of the day's 17 launches resulting in flights of over 30 minutes, the nearest being by Peter Guest in Astir DPO and Nora van Genugten in the DG303, both recording flight times of 26 minutes from 3,000' tows behind the Eurofox, which was again used for tug pilot re-validation.  David Campbell recorded the two longest 2 seater flights,  25 minutes with George Goodenough  in K21 KLW, and 24 minutes with one of the 3 First Flight pupils of the day, again in KLW.

Tuesday 21st.   The high pressure had started to decline, allowing cloud from an Atlantic front to start to invade the country from the NW.  However, the site remained in sunshine for virtually all the flying day, the anemometer trace showing no movement from calm throughout the day,  a very unusual occurence for Sutton, although the windsock did indicate a very light breeze at times, mainly from a W'ly direction.  When flying, various fires indicated a very variable wind direction at ground level.  The day's 12 launches were all flown off runway 24, mainly behind the Eurofox, the Pawnee being used for 1 launch to allow Paul Whitehead to introduce and check out Chris Collingham on the Eurofox.  The result was that Chris was cleared to fly it on towing duties, so well done Chris.    In this he was aided by Chris Thirkell and Polly Whitehead who individually provided his first Eurofox ATs.  Landings were mainly on runway 20, although the last two flights landed on runway 06, the first by John Carter and David Watson in K21 JVZ following a simulated launch failure at 300' QFE and the second by George Rowden and First Flight pupil Kim Mormwald in K21 KLW to avoid an into-sun landing late in the flying day.  Kim,  part of a party of 4 on a local walk, was persuaded to take a flight after  one of her companions asked if they could have a photo of them all beside a glider.   The lack of any lift led to flight times never exceeding 27 minutes, while the lack  of wind led to a very pleasant day, as although the maximum temperature was only 8.8C,  sheltered conditions surronding the picnic tables near the club house entrance allowed a couple of visitors to enjoy an outdoor lunch, as the following photo shows.  Not bad for the 21st of January. 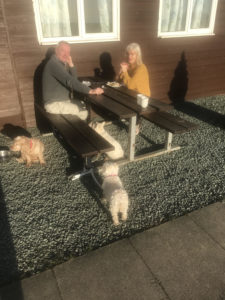