Saturday 25th.  A light to moderate S/SSW'ly wind blew all day accompanied by a low overcast.  An exploratory flight by Bob Beck and the younger of the Altman's managed a tow to 1100' but found cloud on the circuit at 400'.  The conditions didn't improve, so this turmed out to be the only flight of the day.   However, things cheered up in the evening when members assembled for the annual  prize giving  dinner.  The former, prepared by Liz and helpers was thoroughly enjoyed and after a few encouraging words from President Nick Gaunt, the prizes were presented to the winners by club Chairman, David Latimer. A list of the winners follows, as do their photos. 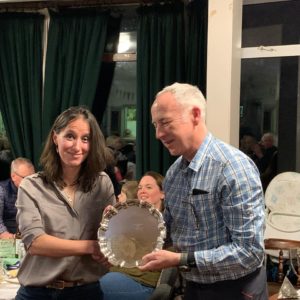 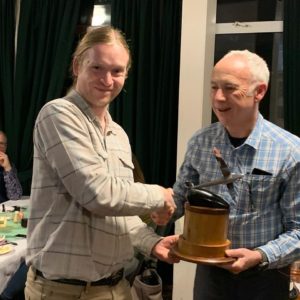 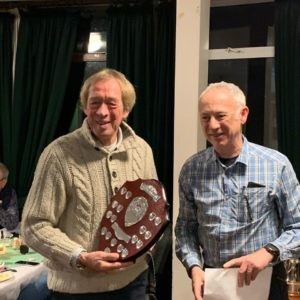 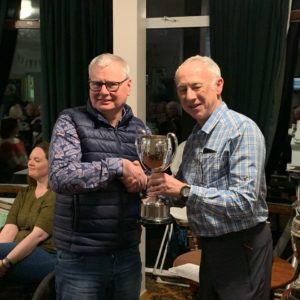 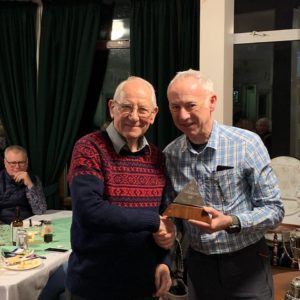 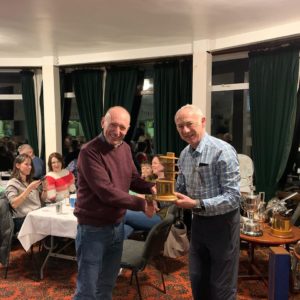 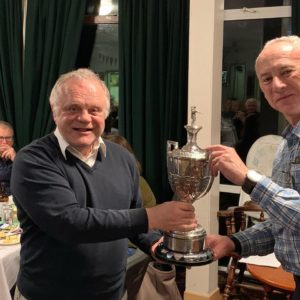 Sunday 26th.  A morning of rain and an afternoon of low cloud, as the moderate SE'ly lessened and veered to become a light SSW'ly, meant a non-flying day.

Monday 27th.   The depression responsible for Sunday's rain had moved away, leaving the site in a cold, light to moderate S'ly that slowly backed into the SW.  The day's 11 ATs were off runway 20 and some January thermals plus weak hill lift off the S'ly facing part of the main bowl allowed winter member Geoff Wright to eke out 1:05 in Astir HVK.  Others to defy gravity for a while were Colin Troise, with 58 minutes solo in the DG 1000, and Sue Aherne with 50 minutes in the DG303, Sue earlier having 31 minutes with Dave Campbell in K21 JVZ to complete the list of those with flying time in excess of 30 minutes.

Tuesday 28th.  A light to moderate SW'ly that slowly veered into the W provided a hill soaring day, the air mass containing a few showers, but these did not interfere with flying on a hill soaring day.  Operations, a mixture of ATs and winch launches, 15 and 3 respectively, were off runway 24 with a few landings on 20 in the morning.  All but 3 of the day's launches lead to flights of over 30 minutes.  Bill Payton, flying the DG303, had a midday flight of 39 minutes and followed this with a flight of 1:04 later in the afternoon, when he explored as far north as Black Hambleton whilst also taking in the forward ridge.  Bruce Grain and Frank Bradley, a day member, had 54 minutes in the DG1000, while Albert Newbery and Nigel Burke had 47 minutes in K21 JVZ.  Others to get into the 40-50 minute bracket were Dave McKinney flying the DG303 and Bruce Grain and Jerry HN in the DG1000, both flights spanning 43 minutes.

Wednesday 29th.   A generally cloudy, light to moderate WSW'ly opened the flying day, the cloudiness being variable and the wind freshening and backing to become a moderate to fresh SW'ly by the middle of the afternoon, with gusts into the high 20kts.  3 ATs during the first part of the flying day were accompanied by 17 winch launches, all off runway 24, with all but 5 leading to flights of over 30  minutes.  Bill Payton, flying Astir DPO, had the longest flight of the day, 1:47, going as far north as Kepwick and then overflying Steve Thompson who had landed out in the DG303 half way between Boltby and Thirlby. Steve had gone as for north as Osmotherly twice, but on his return the second time ran into some very strong sink that resulted in a land out and an early claim on the Aux Vauche trophy for the field landing closest to Sutton.  A photo from the retrieve crew is shown below. 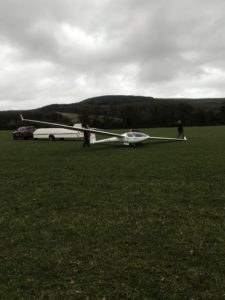 The day's lift was a combination of hill and wave, the latter turbulent and climbs limited by cloud, with only George Rowden's flight in K21 JVZ, with the only First Flight pupil of the day, managing a significant climb, 500' at 2 kts, before the wave slot they were flying in closed.  Thereafter, maximum climbs were to cloud base at around 2,600' asl.  Two other pilots exceeded an hour, Geoff Wright in Astir HVK with 1:04 and Brian Wise with 1:02 flying the DG1000 solo.  A further 12 flights posted flight times in the 30-60 minute range,  the longest being Dave Campbell who had 57 minutes in Astir DPO off the first winch launch of the day, followed by Steve Thompson's 52 minutes before his land out, while Bruce Grain had 2 flights of 44 minutes, first with Tony Kirby in K21 JVZ and then with Andy Took in the DG1000.