Saturday 30th.  Blue, sunny skies and a light E'ly that backed into the ENE, resulted in a busy launch point as pilots took advantage of some flying weather after a week of cloud and rain.  The latter had made parts of the airfield very soft so an added challenge was to land on  the firmer parts, which was successfully accomplished.  In all, 21 ATs were flown off runway 20, the majority of landings being on the same runway, with pilots occasionally choosing to land on 02 or 06.  In spite of the sunshine it was cold with little opportunity for soaring, although Darren Lodge, flying K21 KLW solo, had 32 minutes off a 2000' AT, the longest flight of the day.  The next two longest flights, at 23 minutes, were both for 2 of the day's 4 First Flight pupils and were flown by Ian McFarland, both flights benefitting from higher tows to 3,000'.  As well as both K21s, the club Astir HVK was in demand with Malcolm Morgan (2 flights), Chris Booker, Toby Wilson, Keith Davey and Tim Stanley all having a flight.  The other major interest of the day was the rigging of a AC4, Russian Glider that had been in its trailer for 12 years. Originally built for and entered into an OSTIV competition to select a World Glider Class glider, it came 2nd to the winner, the PW5.  The glider was in excellent  condition  given its long period in its trailer as the following photo shows. 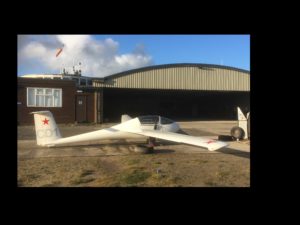 With a span of 12.6 m and a L/D of 33,  a glass version of a Ka6, Derek Piggot flew a 500 km task in it when he was in his 70's.  While an attractive option for a budding solo pilot, the future of the glider is uncertain as the owner has moved to power flying and the paper work to have it declared airworthy could be quite complex.

After the completion of flying for the day 30+ members had a steak pie supper as a precursor to an evening lecture on parachutes by Mac from the Burn GC.  The numbers attending the lecture, which was informative and very well received, were swelled to 40+ as were the waistlines of the attendees who partook of the mince pies, mulled wine, Christmas cake and Wensleydale chees which were available.

Sunday 1st December.  The anticyclone responsible for Saturday's flying weather was still in charge but had shifted position so  that the continuing blue, sunny skies were now accompanied by a light ENE'ly.  The day's 18 ATs were therefore off runway 02 with all landings on the same runway.  Both K21s and Astir HVK shared the day's flying, which in the absence of any lift, resulted in no-0ne exceeding 30 minutes flying time.  Bruce Grain and Joan Wilson flying K21 KLW had the longest flight of the day, 26 minutes, with Tim Stanley having 22 minutes in the Astir.   5 flights managed to fly for 21 minutes, all these flights and the longer ones taking 3,000' tows, with Tony Drury setting this particular bar off the first flight of the day, solo in K21 JVZ.

Monday 2nd.  The anticyclone was still in charge of the weather but was under threat from Atlantic depressions, their presence being  marked by high cover as  a light W'ly slowly backed into the SSW.   The day's 14 ATs used runway 24, as did the majority of the day's landings, although some of the latter were onto runway 20.  Another day of pleasant flying but no lift saw the longest flight manage 30 minutes, this being by visitor L Clarke in the Discus, with Les Rayment and P Margetts, one of the day's 4 First Flight pupils having 25 minutes in K21 KLW.  Bruce Grain  took another of the day's First Flight pupils for 24 minutes in K21 JVZ, while the same flight time was logged by Ron Beezer in the Discus as the 2 K21, the Discus and Astir HVK shared the day's flying.

Tuesday 3rd.  The anticyclone was still hanging on, the SSW'ly wind having become light to moderate and the high cover now somewhat patchy.  Operations were off runway 24 with landings on either 24 or 20 and the wind strength and direction was sufficient of generate some weak hill lift this being best utilised by Bill Payton who had 1;13 in Astir HVK off a second launch the first attempt having been aborted on the ground run. Three private owners rigged and flew, Steve Thompson having 1:22  in his Discus, but this was via 2 flights, Steve first taking off at 11:13 hrs and then  at 13:44 hrs.  The other optimistic private owners were Nick Gaunt, who had 30 minutes in his LS7 and co-owners Roger Burghall and Tor Tavener in their ASW20 , Tor having 28 minutes and Roger 20.  The longest 2 seater flight was by Ian McFarland and his First Flight pupil who had 24 minutes in K21 JVZ.

Wednesday 4th.   The anticyclone was now in decline but still provided another sunny flying day, the wind now being a light to moderate SE'ly.  Kevin and Liz Kieley set the tone of the day with a flight of 30 minutes in K21 KLW from the first AT off runway 20 and their flight time was not exceeded until early afternoon when John Carter and Stuart Richardson had 33 minutes in K21 JVZ, albeit off a higher tow.  Three of the day's 9 launches led to flight times of 25 minutes, these being by Dave Campbell and one of the day's two First Flight pupils in JVZ, Chris Thirkell flying KLW solo and visitor C Darlow from the second of his two flights in the Discus.

Thursday 5th.  The anticyclone had now departed the scene leaving low pressure in charge, the result being a day of low cloud, rain from 1400  hrs and increasing wind.  The latter started off as a moderate S'ly but increased to fresh as it veered into the SW, with gusts into the mid 30 kts.  The day was therefore non-flying.

Friday 6th.  The gusty SW'ly wind was intially moderate to fresh but weakened quickly, becoming light by the end of the day, while the early wind conditions delayed launching to just before midday.  Thereafter, only 4 winch launches were flown in the generally cloudy conditions, the reduction in wind speed being illustrated by flight times, with only Steve Thompson and Dave McKinney utilising the hill lift in a flight time of just over an hour off the first launch of the day, reaching a maximum altitude of 1200' QFE.  The three launches that followed found the hill not to be working with the result that they were all back on the ground in under 25 minutes.

Saturday 7th  A damp, cloudy airmass transported by a light to moderate SW'ly wind that slowly backed into the SSE, nevertheless brought some soaring opportunities on a day where 15 ATs and 6 winch launches were flown.   3 of the day's flights exceeded an hour with a further 7 exceeding 30 minutes.  The longest flight was by Jesper Mjels who, taking a winch launch, had 1:26 in Astir HVK, having earlier had 57 minutes  from the first winch launch of the day in the same glider.  The other two flights to exceed an hour were by Colin Troise and Ben Dawson who, sharing a flight in the DG1000, had 1:05.   Later the DG1000 was flown by Ron Beezer and Christina Griffiths for 1:12, during which time they contacted wave off a high tow and climbed to around 6,500' asl, providing the following photos that confirm the damp nature of the air mass. 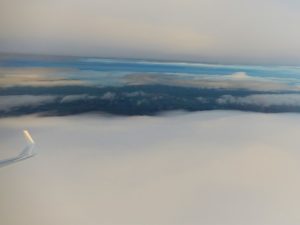 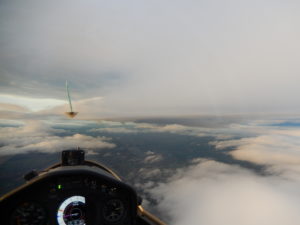 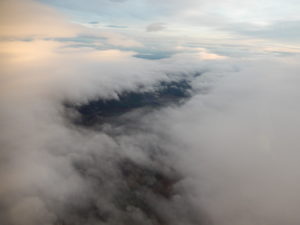 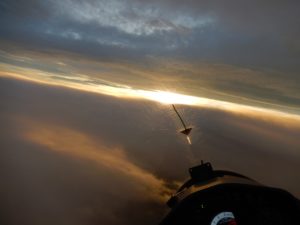 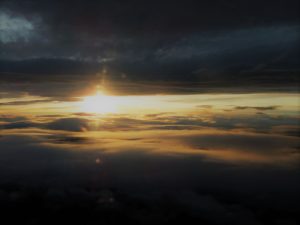 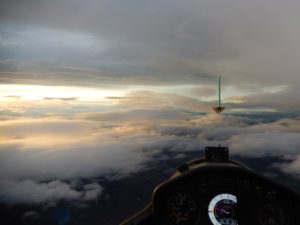 The slow veering of the wind from SW into the SSE meant that those taking launches after 1430  hrs found little in the way of lift, with all the soaring flights in excess of 30 minutes being during the morning or early afternoon.   The day even saw the T21 come out of the hangar and take  a winch launch in the hands of Nick Gaunt and Duncan Pask, albeit that they were very soon back on the ground.  Saturday also saw another day of the Introductory flights for those  with an interest in having a longer term interest in gliding beyond the normal Trial Lesson format.  Aspects of the day, a pre-briefing, pre- flight briefing and flying are all illustrated in the following photos. 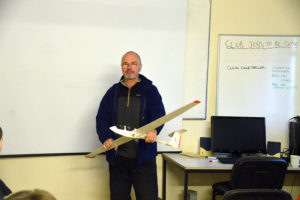 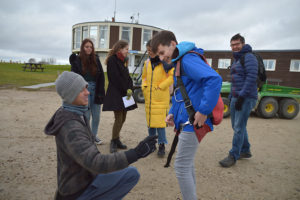 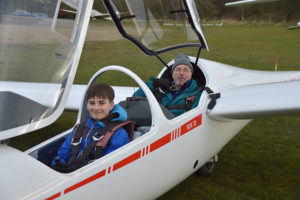 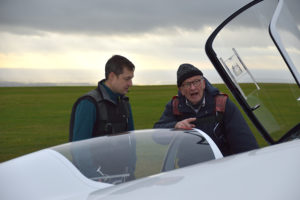 Sunday 8th.  A gusty and increasingly fresh WSW'ly brought in frequent showers as Atiya, the first named storm of the winter, approached the UK. With gusts to around 45 kts recorded during the middle of the day it was definately one on which to keep the hangar doors firmly closed.

Monday 9th.   The aftermath of storm Atiya as the centre moved off E into the North Sea was a cold, gusty and moderate NW'ly, certainly not a wind direction and strength that promotes flying at Sutton.  Consequently, there was no flying, although from mid-afternoon, the wind speed declined to become light.