Thursday 14th.  Showers with attendant low cloud in an increasingly fresh N'ly wind kept the gliders in the hangars and would be pilots either in the clubhouse or at home.

Friday 15th.  The light to moderate wind had veered slightly into the NNE and pushed along a number of showers and longer spells of rain that amounted to 6 mm over the day.  However, a dry spell in the early afternoon allowed Steve Thompson to provide flights for David Eccles and 2 First Flight pupils in K21 KLW, with flight times of 20 to 24 minutes from 3,000' tows off runway 02 with returned Pawnee, EV.

Saturday 16th.   The wind had dropped to light and was predominately from the NNW, as the centre of an Atlantic low crossed the UK.  The attendant low cloud and dampness meant no flying on the day.

Sunday 17th.  The low pressure had drifted off into the North Sea and filled, leaving the site in a light to moderate N'ly, the cloud base being sufficiently high to allow flying to get under way off runway 02 around 1030 hrs.  Brian Wise took the first launch with Kevin Duggan in K21 KLW, Kevin being the 1st of the 4 First Flight pupils of the day, the flight lasting 21 minutes and being typical of the rest of the day's 10 launches.  There was, however, an exception, as off the second flight of the day, Keith Davy, flying the same glider solo, contacted some 1-2 kt wave and climbed from his launch height of 2,500' QFE to around 4,000' asl repeating the exercise before the wave disappeared.  This foray did, however,  extend his flight time to 44 minutes, by far the longest of the day with the next longest being the 24 minutes acheived by Brian Wise and another First Flight pupil, again in KLW.   Mike Collins was the only pilot to fly a single seat club glider, having 21 minutes in the Discus.

Monday 18th.   A ridge of high pressure gave a sunny if cold day at Sutton, the wind being a moderate NNW'ly, this slowly declining to become light by the end of the flying day.   The launch point became quite busy as 4 Club gliders and 1 privately owned one were taken to the launch point, as the following photos show, with Astir HVK just about to take off and a number of gliders being prepared for launch. 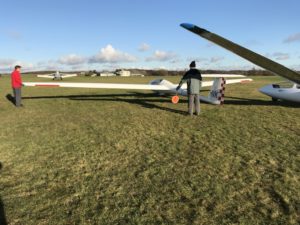 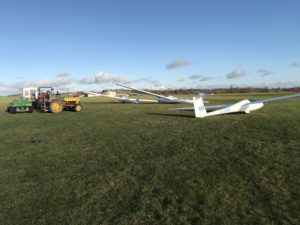 20 launches were flown off runway 02 behind Pawnee EV, but although the excellent visibility enabled the surrounding countryside to be admired, only 1 pilot reported finding any lift.  This was Roger Burghall who reported a 50' climb in weak wave while flying the Discus for 20 minutes.  This flight time was close to the best of the day in club gliders, with only George Rowden flying the only First Flight pupil of the day in K21 JVZ and Bruce Grain flying with David Thelwall in K21 KLW doing any better, to be precise achieving 21 minutes.  Duncan Pask, flying his LS10, was aloft for just under an hour, but I am unsure if this was due to natural or manmade forces.  Some pilots reported turbulent conditions on take off, but  generally conditions aloft were smooth.  The last flight landed just before sunset, the latter being somewhat pleasing to the eye, as the next photo shows. 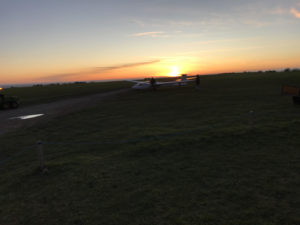