Friday 1st.  A moderate ESE'ly brought in a non-flying mixture of low cloud and rain, the latter amounting to 11.4 mm  and the former low enough to shroud the hill.

Saturday 2nd.    After another 6 mm of rain overnight, the skies had completely cleared by briefing, so operations commenced just after 1000 hrs off runway 20   as a moderate SE blew.  The day saw the 2nd of the prototype "Introduction to Gliding" events, where those new to gliding but with the intention to continue in the sport, are given a more comprehensive introduction than those subject to the more usual Trial Flight experience.  The attendees were joined by new members and Students from Durham University for the first part of the day, where safety and a tour of the facilities and a detailed introduction to a glider feature. The sunny start to the day didn't last, as rapidly increasing cloud led to rain arriving around 1300 hrs but not before 10 launches had been completed.  Ron Beezer and Sally Watson, one of the Introduction to Gliding pupils, encountered wave and climbed above cloud to 4,000' . but the rapidly increasing cloud cover caused a rapid descent and a return to site after 21 minutes, the longest flight of the day.  Saturday was also the day for the YGC's Bonfire party, with John Ellis and helpers ensuring a good bonfire for the evening celebration and Dave and helpers providing the usual spectacular firework display, a trial launch of a firework confirming that the cloud cover would not detract from the event but instead provide a soft focus for the pyrotechnics.  The bonfire and fireworks were preceded dinner provided by Liz and helpers and the evening also saw a presentation to Andy of a Mike Smith print to mark Andy's  contribution to the club over the past few years as CFI.  A raffle in aid of the Yorkshire Air Ambulance raised £200, with the star prize being won by a delighted Ian and Mrs Johnstone as the following photo shows. 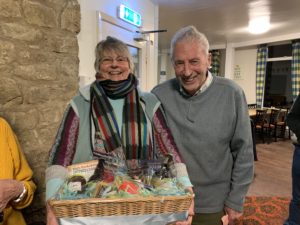 A less welcome plaudit was won by Graham Evison who found the dirtiest puddle to land in on the wet airfield.

Sunday 3rd.  Low pressure was again in charge, as low cloud and light rain and drizzle continued through the day after a wet night, the initially light to moderate S'ly backing into the SE as day progressed, so there was no flying.

Monday 4th. Light rain in the morning led to a drier afternoon as a light to moderate ENE'ly blew, this slowly backing into the NNW.  While the persistent low overcast precluded any glider flying, John Tayler took the oppotunity to test fly some new instrumentation in his Super Cub.

Tuesday 5th.  Another non-flying day, the moderate to fresh N'ly slowly moderating and backing into the NW over the course of the day as the skies cleared in the late afternoon, too late for any flying to take place.

Wednesday 6th.  Bright skies in the morning soon clouded in, but the initial overcast was high enough to not interfere with operations off runway 20 as an initially very light ESE'ly slowly increased to become light to moderate.  However, an NE progressing front brought a lowering cloud base and rain arrived in the middle of the afternoon.  The morning and early afternoon's  flying amounted to 11 AT's off runway 20, the conditions aloft being absolutely smooth, ideal for the day's 3 First Flight pupils, although not conducive to long flights, the day's maximum being 24 minutes flown by John Carter and Kate Ashley, a visitor from Millfield, in K21 JVZ,  Alan Beaumont having 23 minutes flying K21 KLW solo.  Bill Payton accompanied by Les Rayment took the opportunity to fly Bill's DG1000t for 21 minutes.  After the close of flying, the DG500 was degrigged in the rain and the fuselage taken down to North Yorkshire Sailplanes by Jim Mclean for some control rod maintenance.