Thursday 10th.  A moderate and at times moderate to fresh WSW'ly meant a winching/hill soaring day with 3 private owners taking advantage and 2 contributing  to the 4 flights of over an hour that were flown.   Mr Crump in his DG200 had the longest flight of the day, 1:47, being closely followed by Ron Beezer in the Discus with 1:44 and Martyn Johnson in his DG600 with 1:38.  Nobody went too far from site with Thirsk, the forward and Kepwick ridges being the extent of the day's explorations and 4,300' being the highest altitude reached.  Visitors Paul Whitters and Paul Skelton flying the DG500 also joined the > 1 hour list with 1:14 with Bruce Grain and Joan Wilson having 56 minutes in K21 JVZ, and Dave Campbell having 48 minutes in Astir DPO, two of the 7 flights to exceed 30 minutes.  Later in the day, increasing cloud and a change of wind direction into the SSE meant flying came to a halt around 1330 hrs, as patchy rain arrived.

Friday 11th.  Morning rain, accompanied by a light S'ly, moved away to be replaced by brighter skies, a moderate SW'ly wind and some thermal activity.  Flying got underway off runway 24 around 1345 hrs, and 5 winch launches were flown with the last flight landing at around 1700 hrs.  Martyn Johnson, taking off first in his DG600, went exploring for wave but in spite of looking as far afield as Leeming and Topcliffe, didn't find any, but did climb to 3,400' asl in his flight of 2:38.  Andy Parish and Nigel Burke had 1:37 in the DG500 while Bruce Grain and John Dore, who had stayed on from  the morning briefing in spite of the poor weather outlook, had 53 minutes in K21 KLW, with pilots reporting good ridge lift and 4 kt average thermals.

Saturday 12th.  A sunny start to Saturday led to a busy day of AT,ing off runway 24 into a light to moderate wind that varied in direction between S and SW.  29 ATs were flown with landings being on either 24 or 20, and the ridge and wave resulted in 19 flights in excess of 30 minutes with 9 in excess of an  hour.  Visiton Russell Cheetham in his JS1 posted the longest flight of the day, 3:09, during which he climbed to around 10,000' asl and visited the Yorkshire Dales, flying to the west end of Wenslydale.  Toby Wilson and Nora van Genugten in the DG1000 climbed to around 7,500' asl in their flight of 1:38 with Nora supplying the following photos. 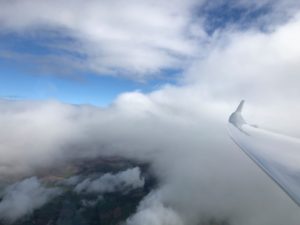 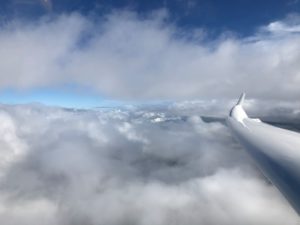 A number of pilots climbed to between 5-5,500' asl, with Leeming and the A1M being popular destinations.  7 private owners launched and populated the top of the duration list, Steve Thompson having 2:42 in his Discus, and Darren Lodge 2:00 in his LS8-18.  Others to make it on to the 9 strong > 1 hour list included Mike Collins with exactly an hour in Astir DPO, Bob Beck and G Johnson with 1:09 in K21 KLW while Simon Altman, flying the DG303 for 54 minutes  was one of 10 pilots to have flights of between 30 and 60 minutes.  A heavy shower around 1330 hrs early landings for those who launched a little earlier but several pilots were able to circumvent the shower and remain airborne.

Monday 14th.  A bright but cloudy start to the day was followed by deteriorating conditions that brought in low cloud and  eventually led to rain around 1700 hrs.  The conditions were not conducive to glider operations but conditions in the morning did allow the recently arrived 120 HP Eurofox to have 3 flights, as its engine running in period continued at the hands of Dick Cole.

Tuesday 15th.  Pilots leaving home under blue, sunny skies were confronted on leaving Thirsk by the sight of the North Yorks Moors in cloud as very light W'ly blew.  The cloud eventually lifted late morning but left a legacy of a medium level overcast with fracto Cu underneath.  Visitors from the Nene GC who had arrived either on Saturday or Sunday were anxious to get into the air so K21 was DI'd and flew twice off runway 24, subsequent landings being off runway 20. YGC's Ian McFarlane and visitor Roger Emms took the first flight finding holes in the cloud at 800' QFE that enabled them to launch to 2,000' QFE.  After their landing some 15 minutes later, Roger took fellow visitor David Mansfield for a 21 minute flight but by this time the lower cloud had become more extensive and no further flights were made.   The following photos show the last airfield retrieve in progress and the post operational washing of the Pawnee, the airfield having become soft in places due to the wet weather of the last few weeks. 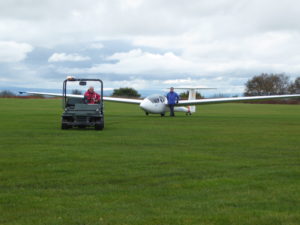 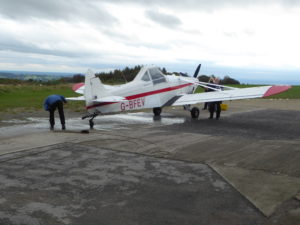 The Pawnee's engine was not the only one to be heard, as Dick Cole continued with running-in the Eurofox's 120 HP engine, this time via a period of ground running, as shown below. 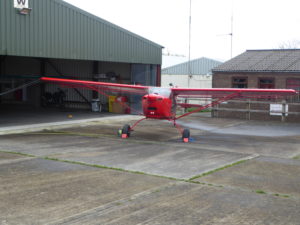