Sunday 29th.   An Atlantic depression and its accompanying fronts meant it was a dull and wet day at Sutton, with 23.4 mm of rain recorded and not surprisingly, no flights.

Monday 30th.   Sunday's depression had moved off to the east leaving the site in an unstable, light to moderate WNW'ly flow that provided some limited convective conditions in the post lunch period.  These were utilised by Rob Bailey in his ASG29t in a flight of 2:18, during which he visited Malton and Pickering, before advancing high cover from the west meant a return to site.  The only other pilot to exceed an hour's flying time was Duncan Pask who had 1:05 in his LS10, with only a further 4 of the day's 27 ATs off runway 24 managing flight times of over 30 minutes.  These included visitors Graham Morris and G Burkenshaw in their own gliders with Graham later posting a 31 minute flight in the DG500 with his partner. The 4 th > 30 minute flight was by Les Rayment and one of the day's 6 First Flight pupils in the DG1000.

Tuesday 1st October.  Another Atlantic depression, the remnants of another Atlantic hurricane brought another day of rain and no flying, as the light to moderate NNE'ly wind backed into the NNW over the course of  the day.

Wednesday 2nd.   JThe legacy of Tuesday's depression was a sunny day, with a few ragged Cumulus in the afternoon, as a light NW'ly blew.  Operations were off runway 24, with some landings on 20, the day's launch total being 19.  It was essentially a day of circuits with only one flight, that of Andy Parish with one of the day's First Flight pupils managing 32 minutes off a 3,000' QFE launch in the DG1000.

Thursday 3rd.   A light ESE'ly that progressively strengthened to become moderate, led to 13 ATs off runway 20, none of whom led to flights in excess of 30 minutes.  Only the two K21s were flown with 6  of  these flown dual  and 7 solo with Bruce Grain's two flights with the day's First Flight pupils being the longest at 26 minutes, courtesy of 3,000' QFE tows with Bob Spiller's 24 minutes solo also the result of the same release height.

Friday 4th.  Morning rain and afternoon low cloud in a light to moderate NW'ly that progressively veered into the ENE meant a non-flying day.

Saturday 5th.  A front over the west of the UK made very slow progress east so that a flying, if not soaring, day was possible at Sutton.   Scattered low cloud at times, with a base at around 700' QFE,  threatened to disrupt procedings but never did, with 15 ATs off runway 20, its wet patches showing the effect of a wet end to September.  Although the conditions were never to provide a means of staying up, indeed the air was silky smooth during the pre-lunch period and the day's longest flight was 26 minutes, the day was notable for 2 reasons.  The first of these was the first day of an "Introduction to Flight" option for those wanting to experience gliding for the first time. Costing the same as a normal First Flight, the Introduction to Flight option is aimed at those who have an interest in becoming a glider pilot rather that having a one-off experience.  and Saturday saw Alan, Adam and Mike become more fully immersed in the gliding world.  After introductions to the hosting team, all attended the morning briefing, were shown the safety video and then were given a guided tour of the facilities and a detailed inspection of a glider before going out to the launch point.  There their instructor took them for a flight during which the basic controls were demonstrated and the pupil given control of the glider.  After landing, the pupil was debriefed and progress cards on flying and ground instruction filled in.  All the pupils expressed an enthusiasm for the day's activities and one, Alan, had a second flight during the afternoon.  Some photos from the day are included below showing in order: George with pupils Adam and Alan, the whole party, hosts and pupils, host Adam introducing pupils Adam, Mike and Alan to a glider and Ron doing a pre launch glider check with pupil Mike. 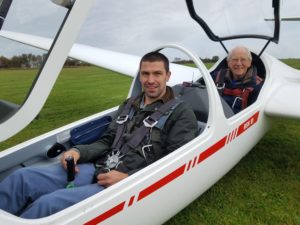 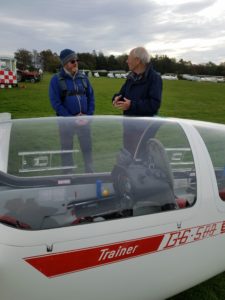 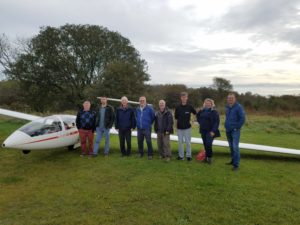 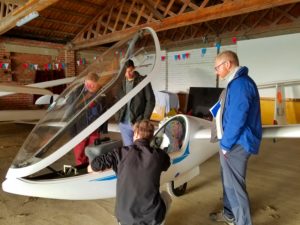 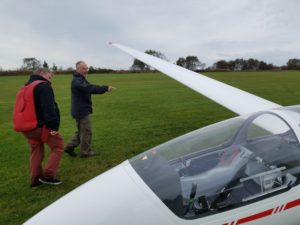 While all the above was going on, the second of the day's highlights was the first solo of Josh Brooks, which he followed up with a second flight later in the day, so congratulations to him.  The following photo shows a happy Josh receiving his wings from Peter Goodchild. 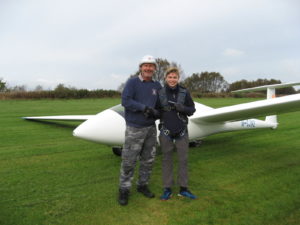