Sunday 27th.   After the rain of the previous two days there was some uncertainty as to whether the airfield would be too wet for operations, but, with a light to moderate W'ly blowing, operations off runway 24 were possible via a combination of winch and AT launches.  Initially, the sky was unblemished blue, as the following photo from Roger Burghall demonstrates, the light variety of wind also being evident. 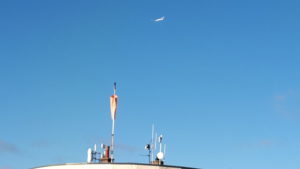 Later in the day some cloud bubbled up, providing extra lift on the hill which previously had been somewhat marginal.   12 of the day's 15 flights, 12 via the winch and 3 via AT, exceeded 30 minutes, with 8 over an hour, but no one ventured too far, with John Ellis in  his DG800 getting as far as the East Coast Main line and Nick Gaunt in the Discus going north along the ridge to Thimbleby.   John had just over 3 hrs, while Darren Lodge in his LS8-18 had 2:26.  John  and Darren were 2 of the 5 private owners to rig and fly, the 3 others posting flights of between 50 minutes and 1:18.  The aforementioned Nick Gaunt had 1:08 before handing over the Discus to Conrad Thwaites who had 1:06, while Bill Payton flying the DG1000 first with Keith Davey and then John Dore had 1:06 and exactly an hour respectively.

Monday 28th.  The wind had become a light to moderate NNW'ly and with blue skies again overhead, AT operations got under way off runway 02 around 1040 hrs, with Albert and Martin Newbery finding smooth conditions during their flight in K21 KLW.  14 other ATs followed, the sky eventually being populated by Cumulus that provided some 2kts lift for Darren Lodge as he flew LS8 KFV for the longest flight of the day, 35 minutes, in the early afternoon.  George Rowden then flew the same glider for 28 minutes including an engine test run.  The were no club single seaters flown, but the 2 seaters were busy with 6 First Flight pupils, 3 of whom were from the same family, Les Rayment and George Rowden sharing the instructional duties.  The day also saw two instructors under training, with Nigel Burke practicing his BI patter and Ian McFarlane practicing spinning demonstrations as part of his Full Cat syllabus, both with Chris Collingham as P1.   The launch point activity was nicely captured in  the following photo by Tuggie Dick Cole. 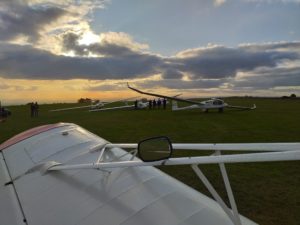