Tuesday 24th.  The remnants of an Atlantic Hurricane brought a day of heavy rain on a light to moderate wind, this starting in the E and progressively veering into the SW.  The 37.1 mm of rain that fell accompanied by low cloud meant a non-flying day.  Millfield was similarly affected so it was a day for non-flying activities there too.

Wednesday 25th.  Wednesday was predominately a dry day with the occasional shower as a light ESE'ly blew.  However, the moist airstream provided a low overcast which brightened briefly during the afternoon, but not sufficiently to allow any flying to take place.  The same story was applicalble to Millfield so the YGC visitors spent the day visiting the local tourist spots.

Thursday 26th.  Heavy showers in the early morning deposited another 12 mm of rain but these cleared away to the NE by breakfast time, leaving the site in a light to moderate SW.  Flying got underway around 1030 hrs via ATs off runway 24, with Andy Parish and the first of the day's First Flight pupils climbing to around 6,000' asl in wave in their flight of 32 minutes in K21 JVZ.   They were followed by visitors Graham Morris in his ASW27 and Graig Lowrie in his DG800 who both contacted the wave, Graham climbing to around 10,300' and Craig to around 8,000', all asl.  The wave then chose to collapse with both pilots back on the ground after around 1:40.  The hill was working somewhat fitfully, with a number of pilots managing flight times in the 30-50 minute range including Andy Parish and Ed Silmon who had 50 minutes in K21 KLW, Steve Thompson who had 41 minutes in his Discus and Andy P and visitor Mr Burtenshaw with 40 minutes in KLW.  Later in the day, Steve in his Discus and Graham in his ASW27 launched again and each had just over 2 hrs of hill soaring., while Duncan Pask had just over an hour in his LS10 contributing to a day's launch total of 19.

At Millfield Polly Whitehead reported that Thursday started in a much more promising fashion than Wednesday. The wind was coming from a slightly awkward direction giving the duty instructor the choice of an into-wind but less favourable take-off run or accept a crosswind but with a longer and less obstructed run. Initially, he went for the cross-wind. The forecast rain arrived after a few launches but flying recommenced after an hour’s break. The first few launches didn’t amount to much more than a sledge ride, but then one of the local instructors took a solo launch in the Alliance and climbed to over 6000 ft just downwind of the airfield. A bit of further shuffling with the launch point as the increasing wind made the crosswind launching somewhat untenable, however most of the following launches contacted wave. DG1000 pilots included Roy Wilkinson, John Doré, John Shaw and Joan Wilson, under the tutelage of Bob Beck and John Carter. Tor launched the ASW20 missing the wave first time but contacting on his second launch getting to just shy of 10000 ft and having the last landing of the day. The last flight in the DG1000 went to over 10000 ft in 58 minutes, but today’s Top Man award went to John Ellis. After the Alliance’s success, he tried to rig his DG808C but found the wind too strong to do so safely. However, ‘the cavalry’ arrived to help (in the form of YT and John Carter) and he eventually got airborne just after 4 pm, achieving a climb to 11,700 ft. Highest flight of the day for the YGC team, but annoyingly 100 ft short of the highest climb of the day by a Ventus 2ct. In other news, we said ‘goodbye’ to Tom Beck as he departed back to Hampshire in G-BJOB.  A couple of photos from John Carter in the DG1000 show the Northumberland countryside and skyscape. 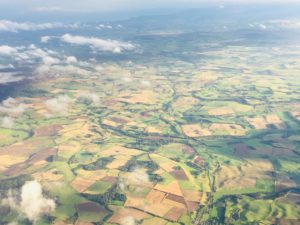 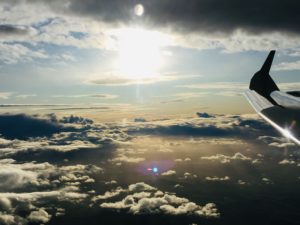 Friday 27th. A bright start to the day didn't last, as the steadily increasing wind  quickly veered from the SE into the WSW and degenerated into showers that preceded more general rain.  The only flight of the day, AT'd off runway 24, found a low ceiling and with showers looming, all the equipment was put away before the more general rain arrived, this depositing another 4.1 mm before the clearance arrived in the late afternoon, too late for flying to recommence.   The rain arrived somewhat later at Millfield so Polly Whitehead was able to report some more flying and wave flying at that.

Well, an early stack for us today. The morning’s briefing warned of heavy rain from 1200. So, an early start to the flying to make the most of the day. We decided not to rig the DG1000, and instead opted to fly the club gliders. First off the blocks was Bob Beck and John Shaw in Milfield’s DG505. They didn’t climb much above release height, but had no problem staying airborne, and kept the flight time to an hour to allow someone else to have a go. Meanwhile, Joan climbed into the K21 with Paul, and they flew for around 1:20 and took the Top Man and Woman prize for the day with their climb to 8200 ft above site. Marian and Bob took the next launch in the DG505, flying for around 1:15 and reaching 7500 ft. Both gliders flew through some heavy rain on the descent, so landed back at the hangar. After lunch in the clubhouse, everyone dispersed to enjoy some free time before our planned trip to Milan (the Italian restaurant in Wooler, not the city!) for the last night get together.