Friday 30th.  The  moderate, initially SSE'ly wind, soon veered into the SW and strengthened to moderate to fresh, resulting in a mix of ATs and winch launching, the day's 3 ATs being  off runway  20 and followed by the 12 winch launches off runway 24.  The skies were initially cloudy but cleared after lunch to high cover, as a mix of hill, thermal and wave lift provided  opportunities for extended soaring.   In the event, the wave proved to be tricky to exploit with only, who else but Martyn Johnson in his DG600, making a significant climb to 14,500' asl as he visited Northallerton and Boroughbridge in the longest flight of the day, 3:34.  Most other pilots restricted their soaring to the main bowl although K21 JVZ and the DG500 made occasional forays to Boltby, while JVZ also made it SW to Dalton in search of the wave.   Visitors Ken Reid nd Bill Cooke swapped their Duo Discus for K21 KLW for 1:56, while Paul Whitehead and Tom Gooch had just under an hour in the DG500. one of the 7 flights to have between 30 and 59 minutes soaring.  !an McFarlane and Jerry HN had the shortest flight of the day, their 3 minute epic off a winch launch seeing them land out close to, but outside the site's eastern boundary making them odds on to win the coveted Aux Vache trophy for the nearest field landing to Sutton.

Saturday 31st August.  A moderate to fresh SSW'ly slowly moderated over the day as it veered into the W, so it was again a day where winch and ATs were on offer, the day's 2 ATs off runway 20 being followed by 14 winch launches off runway 24.  The 13 flights to exceed 30 minutes, including 8 who were aloft for > 1hr, had to contend with some showers, but again had a mixture of hill, thermal and wave lift to exploit.  Martyn Johnson continued to deplete his Oxygen supply with a climb to 16,600' asl in his DG600, but again nobody else made any significant wave climbs, with the next best height being around 4,700' asl by Fred Brown and First Flight pupil A Dawson in the DG1000.  Martyn's flight of 2:49, the longest of the day, was followed by Bill Cooke and Ken Reid's 2 hrs in their Duo Discus, while Ian Bullous in his DG800 almost made it to 2 hrs with 1:58.  The 5 other pilots to have between 1-2 hours included Fred Brown and Lee Grinrod in K21  JVZ with 1:37, Toby Wilson and First Flight pupil D Nadauld with 1:32 in the DG500 and 1:21 by Simon Altman in Astir HVK.

Sunday 1st September.  The run of  winds from the SW'ly quadrant continued, with again a SSW'ly being the initial direction but this soon veering into the W, before veering further  into the WNW towards the end of the day.  The first 6 of the day's launches were off runway 20 but thereafter, launches were off runway 24, the mix of launch methods comprising 12 ATs and 21 via the winch.  Showers were again a feature of the day and their increasing frequency led new member Greg Corbett to abandon his cross country task on reaching Sutton on the Forest in his Kestrel and return to Sutton in his flight of 51 minutes, during which he climbed to 5,100' asl.   This altitude proved to be quite popular with Les Rayment in his DG800 and Rob Bailey in his ASG29t also getting to this altitude and Chris Booker in   his LS1 doing slightly better in getting to 5,400' asl.  Subsequently however, Chris did significantly worse as, after visiting Ripon, he flew to the Tontine seeking to explore the ridge there but found it wasn't working and landed out just east of the TP as illustrated in the following photo.  A pity about the sky! 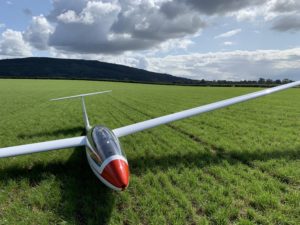 The day's wave flights were not as impressive as those on  the previous days, but Jon May in his Ventus 2ct made it to 6,500' asl and Martyn Johnson in his DG600 to 7,000' asl, finding a 2,000' climb just to the north of Ripon. Two of the day's ATs and 10 of the day's winch launches led to flights of over an hour, Martyn Johnson and Andy Wilson both having over 3 hours with Jon May, Toby Wilson and Duncan Pask all having over 2 hours.  Ian McFarlane and Paul Frost joined the other 4 > 1hr pilots with 1:08 in K21 JVZ, with Tor Taverner in the DG303 also a member with 1:24.

Monday 2nd.  A steadily increasing in strength SSW'ly led to initial ATs off runway 24 but after 2 launches, the operation moved to runway 20 with a further 9 launches accomplished.  Showers led to temporary halts in flying and more general rain led to an early end to flying around 1530 hrs, by which time the launch total stood at 11.  The hill provided the means of staying airborne with 2 flights, by Chris Booker in his LS1 and Toby Wilson in his Standard Cirrus, lasting over 2 hours.  Mr Hartley in his Pegasse had 1:17,  with only Will Blackburn, flying the DG1000 with Karl Krous, being the only other pilots to make it beyond 30 minutes, 35 minutes being their flight time.   Andy Parish with David Trouse in K21 JVZ and Robin Hutchinson and Andy Billingham in K21 KLW, both had flights of 30 minutes.