Tuesday 6th.   A light to moderate SSW'ly blew all day, so operations were off 20 with 26 ATs flown, including 6 for First Flight pupils.  The majority of the  day's isolated heavy showers missed the site,  but one arrived around 1700 hrs and caused a brief termination of flying and also a marker between those members who had been on site all day and the Tuesday evening group.  The day had provided some convective activity with consequential  soaring opportunites, gaps in the cloud providing views of high wave,  The latter tempted one private owner to launch, with Martyn Johnson going wave hunting in his DG600, but in spite of excursions out to the A1 around Dishforth, no wave was found, with Martyn returning to site after 2:23, the longest flight of the day. Both Mike O'Neil flying the DG500 solo and Ron Beezer doing the same in K21 JVZ had flight times of just under an hour, with Ron later having 45 minutes with Eddie N/L off a high tow in the DG500.  The day also ended  on a high for Konrad Kawalek as he had his first solo in K21 KLW, being subsequently being awarded his wings by Steve Thompson and then ringing the Disforth Bell in celebration as the following photos show. 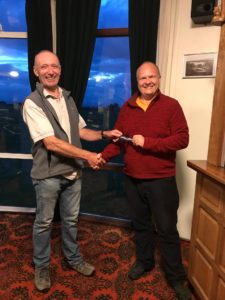 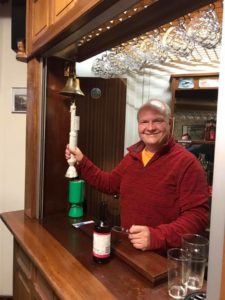 Wednesday 7th.  A moderate WSW to SW'ly wind led to a mixture of winch and ATing off runway 24 but not all the details of the day are currently to hand so they will be reported later.

Thursday 8th.   A light WSW'ly blew, with Cumulus blossoming early and intially tending to over convect, while later in the day the skies cleared before a sea breeze front crossed the site around 1700 hrs with the wind becoming a light to moderate ENE'ly.  14 private owners launched out of the 37 ATs flown on the day, with a number of long flights achieved, although not all those who set off on cross countries found the conditions easy.  The longest distance covered on the day was by Derek Taylor who declared Sutton, Doncaster NW, Tontine, Goole and Sutton in his ASW22 and, having completed this, went on to add Malton and Pocklington and thus fly 405 OLC kms.  Steve Thompson in his Discus did a 305 km O/R to Grantham, reporting no problems enroute, while Rob Bailey in his ASG 29 enjoyed good conditions as he flew around Northallerton, Richmond, Penyghent and the Humber Bridge, covering in excess of 300 km. Albert Newbery and Stuart Heaton in their DG1000 visited 9 local TPs in their flight of 4:18, one of 5 flights to exced an hour, another being by  John Ellis in his DG800 who was another pilot to fly over 300 km, his 301 km including TPs at Humber Bridge, Masham and Market Weighton, although John had to survive a low point over Dishforth.  Several pilots did not however, survive low points, with a large blue area that developed in the early afternoon accounting for George Rowden in his LS18 as he flew the Humber Bridge, Kirkby Moorside leg of his 300 km task,  Fred Brown in his Ventus as he returned from Pocklington and Duncan Pask in his LS 10 as he returned from South of York, all of the above having to resort to their engines.  This lack of lift also affected those locally soaring at site during the afternoon, although visitor Jenny Goldsmith bucked the trend with 3:31 in Astir DPO, her husband David later having 1:50 in Astir HVK.  Other cross country pilots included Peter Clay in his Ventus who visited Pocklingon and Burn and also posted the highest climb of the day, 5,700' asl, while Jesper Mjels in his DG400 visited Leyburn, Ripon and Boroughbridge as did Nigel Burke in his DG800, both having over 3 hours of flying time.  Towards the end of the day, the wind dropped right off so operations were switched to runway 20 but only 2 launches were flown before the sea breeze arrived, with both flights landing on 06 to end the day.