Tuesday 20th.   A light to moderate WSW'ly blew all day and with generally cloudy skies but with thermal activity, 5 private owners launched on a soaring day, with 20 of the day's 27 launches exceeding 60 minutes and 6 of these exceeding an hour.   The private owners all had flights exceeding 2 hours and while Martyn Johnson in his DG600 visited Dishforth and Bill Payton and copilot visited the Tontine and Boroughbridge, Steve Thompson tried an O/R to Grantham in his Discus.  In spite of somewhat tricky conditions that required cloud climbs to negotiate spreadout and blue holes, incidently getting to 6,400' asl in the process, Steve didn't quite make it back to site, landing out at Bagby, from where he has a very short AT back to Sutton pretty much in time to oversee the Tuesday evening flying.  Thanks are due to Bruce Grain for remaining on site to help out until Steve arrived back.  Steve's flight time of 5:25 was the longestof the day, with Darren Lodge in his LS8-18 having 4:11 as he sampled the local lift.   The day saw a mixture of winch and AT launch methods, 5 of the former and 22 of the latter off runway 24 and the soaring continued until quite late as the Tuesday evening group had a convenient cloud street as well as gentle and gently subsiding ridge lift to ensure lenthened flight times.

Wednesday 21st.   Cumulus Congestus were a feature of Wednesday's flying, leading to the occasonal shower, as a light to moderate SW'ly slowly backed into the SSW.  Operations were off runway 20 although Bruce Grain and Josh Abbey did land K21 JVZ on runway 24 after the longest fiight in a club 2 seater of 54 minutes.  This was 1 of the 6 flights to exceed 30 minutes with 5 exceeding an hour.  The 4 private owners to launch contributed 3 of the flights of over an hour, with John Ellis having 2:37 in  his DG800, the longest of the day.  Most people stayed local, but Andy Wright in his Nimbus 3 did an O/R to Goole.  Reg Rowlingson in Astir DPO, Roger Burhall in the DG302 and Andre Feldman in the Discus all enjoyed around an hour to an hour and a  half's flying. while towards the end of the day Andy Parish gave one of the 5 First Flight pupils of the day 42 minutes in K21 JVZ.

Friday 23rd.  The SW'ly flow of Thursday remained, but its strength had lessened to become light to moderate as a day of sunny intervals provided some thermal based soaring opportunities.  David Campbell and Jerry HN got the day off to a flying start with 59 minutes in K21 JVZ, the day continuing in much the same vein as 17 of the day's 22 ATs off runway 24 exceeded 30 minutes, with 5 exceeding an hour.  4 of the 5 private owners who launched had flights in excess of an hour with George Goodenough having 3:09 in his Standard Cirrus, Derek Taylor having 2:56 in his ASW22 and Les Rayment having 2:11 in  his DG800.   Derek's flight, with a take off time of around 1500 hrs, took in Scarborough then to the  south of Pocklingon, returning to Sutton via Kexby, a distance of 253 OLC km.  Derek reported the best conditions near the coast with conditions further inland being described as hard work.  Later in the day, Peter Goodchild and John Dore had 44 minutes in K21 JVZ while somewhat earlier, Chris Collingham had 45 minutes in the Discus.  While the reporting of first solos are a regular feature of the YGC Blog, as pilots start on their individual gliding careers, I have to report a first, the official ending of a gliding career, and a very memorable one at that.  This happened at 14:22 hours when Phil Lazenby's 1:29 flight in the Discus came to a standstill on runway 20. as the following photo demonstrates. 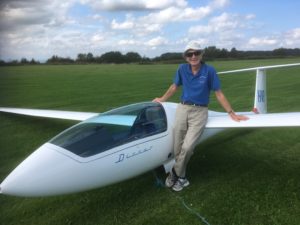 After 56 years of gliding during which Phil has accumulated 5,200 hours in gliders,  the equivalent of 7 months of life, Phil tells me it is time to get a life, although he didn't specify what sort of life he will now be pursuing.  In making this public announcement Phil hopes to ensure he will not be tempted to make a comeback, so I hope you will join with me in wishing Phil all the best for the future.   Phil won't be lost completely to the YGC as he turns his full attention to preserving and hopefully digitising the club archive which he has carefully garnered over the years, an archive of both local and national importance to the gliding movement in the UK.

Saturday 24th.  An anticyclone over Scandinavia brought in a very warm air mass on a light to moderate SSE'ly wind, the maximum temperature at site reaching 24.4C.  With blue skies, albeit with patches of medium level cloud, staying up was a challenge and only 5 of the 21 ATs off runway 20 managed to exceed 30 minutes and only 2 exceeded an hour.  The latter comprised Darren Lodge in his LS8-18 with 2:11 and visitors Ken Reid and Bill Cook with 1:31 in  their Duo Discus.  Jerry HN, with 43 minutes solo in K21 KLW and Graham Evison with 36 minutes solo in K21 JVZ were the best of the rest.  A spate of land outs were a feature of the afternoon as Bob Symonds came off tow early in his LS4 and landed out near Sutton village while 2 competitors from the 2 seater competition at Pocklington landed out on the airfield and later took ATs back to Pocklington.

Sunday 25th.   The synoptic situation had not changed so the flow of warm air from the near continent continued with the heat intensifying, the maximum temperature reaching 27.4C as a light to moderate ESE'ly blew, this tending to back into the E.   The launch point was placed close to the north end of runway 20 to maximise the available take off distance and 18 ATs resulted, with the Falke contributing a further 3 flights.  The low inversion, blue conditions were not condusive to  soaring but around the middle of the afternoon, Duncan Pask in his LS10 managed to soar for 1:05, with only a further 3 flights just managing to exceed 30 minutes.

Monday 26th.   A repeat of Sunday, with blue conditions and an initally low inversion ensuring it was principally a day of circuits, although, as on Sunday, the inversion had moved upwards to around 4,000' asl  by late afternoon, allowing some limited soaring to take place.  The maximum temperature of 27.2c was close to that of Sunday's and with a light to moderate ESE/SSE flow, the day's take off were again from the N end of runway 20, with all the tug and some of the glider landings on 02.   Duncan Pask in his LS10, taking off in mid afternoon,  was again able to utilise the blue thermals in his flight of 1:05, while around the same time Bruce Grain and Alex Patterson had 40 minutes in K21 JVZ, one of only 5 flights of the 18 flown on the day to exceed 30  minutes, Phil Turner managing one of these in Astir HVK from the two flights he had on the day.  Astir HVK was also the mount of Natasha Dodds as she flew her first flight in a single seater, so congratulations to her.