Friday 19th.  A light to moderate ESE'ly blew all day with 4.0 mm of rain falling from grey skies, so  there was no flying.

Saturday 20th.  The light to moderate wind from the ESE continued to blow and be accompanied by cloudy skies and rain, another 4.5 mm falling before ceasing before lunch.  Thereafter, clearing skies and a veer in the wind into the W meant an afternoon of winching off runway 24, with 7 launches flown, although showers meant a significant break in operations.  Only K21 JVZ and the DG500 were flown, with 4 First Flight pupils and 3 members having flights which ranged in duration from 12 to 59 minutes, the latter being for one of the day's First Flight pupils with John Marsh as P1 in the DG500.   John later took Simon Altman for 43 minutes of the last flight of the day in the DG500, while Martyn Johnson provided Tomer Altman with flight of 37 minutes in K21 JVZ.

Sunday 21st.   Another 5,1 mm of rain fell overnight, leaving a generally cloudy day, a layer of medium level cloud allowing some thermal activity under it.  The wind was a light to moderate SSW'ly for most of the day, although is did veer into the WSW in the middle of the  afternoon allowing 2 winch launches to flown.  However, the major launch method was ATing off runway 24 with some landings on 20, the launch total by this method being 25.  The conditions encouraged 6 private owners to rig and fly, they providing the majority of the  6 flights to exceed an hour, a further 15 exceeding 30 minutes.   Thus Darren Lodge in his LS8-18 had 3:15, Rob Bailey in his ASG29 had 2;13 and Martyn Johnson in his DG600 had 2:08.  Rob was the only pilot to fly cross country, doing a circuit of the North York Moors as he visited Danby, Kirbymoorside and Helmsley, while Martyn had a wave climb to 6,000' asl.  Martin White and Steve Wilson shared an hour in K21 JVZ, while John Carter and Chris Ogden had 55 minutes in K21 KLW, the same time being achieved by Graham Evison and his Mile High pupil in the DG500.  The flying of a bygone age was rekindled as Nick Gaunt and visitor Justin Wills flew the T21 on the ridge for 1:14 off a winch launch.

Monday 22nd.  A warm, moderate to fresh/fresh SSW'ly greeted members assembling for the morning briefing and an early exploratory flight off a winch launch led to the conclusion that it was too rough to continue.  A break from flying ensued, with the wind decreasing to moderate to fresh  by midday.  Flying then resumed with a further 12 winch launches flown.  Martyn Johnson in his DG600 took the second of the afternoon's winch launches and was soon in contact with the wave which he used to climb to 19,500'  asl virtually directly above the site in a flight of 1:44.  He was followed by Bill Payton and Dave McKinney in Bill's DG1000 who climbed to 11,500' asl and also went NW via Northallerton and Catterick to west of Reeth before returning east to visit Guisborough and Danby in their flight of 3:52.  John Carter and Phil Turner then took K21 JVZ into the wave and climbed to 11,000' asl, providing the following photo showing classic lenticulars above and not so classic ones below. 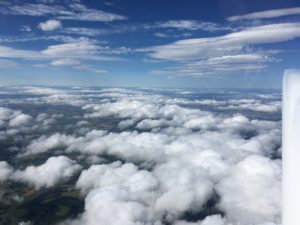 Inbetween Martyn's and Bill/Dave's flights, Fred Brown and First Flight pupil Joe Lee flew the DG500 to 5,700' asl, but the wave proved to be elusive for the rest of the afternoon with hill soaring the fall back option and that a little unreliable at times.  However, later in the afternoon Colin Troise joined the 4 pilots to exceed an hour with 1:24 in  his DG600 and Graham Evison and Chris Ogden got close with 51 minutes in the DG500.

Tuesday 23rd.  A low to the west of the UK and a high to the east generated a light to moderate flow of very warm air from North Africa, Spain and the near continent and gave the site the warmest day of the year so far, 26.7C.  Early cloud soon vanished and a stable period resulted with the 10 private owners to rig waiting patiently for soaring conditions to be established.  Thin Cumulus started to appear around 1300 hrs and the launch point soon had a queue of gliders waiting to launch.  Six of the private owners attempted cross countries, with most finding conditions difficult, with broken thermals and an increasing trend to blue conditions.  Visitor Justin Wills in his Antares, used thermals to contact blue wave in his flight of 4:25, climbing to 8,600' asl and visiting the Reservoirs to the west of Barnard Castle as well as Hawes, Pateley Bridge and Ripon.  No one else had a wave climb, but George Rowden, returnng from Beverley in his LS8-18, after abandoning his declared task of continuing on to Pontefract, found significant stretches of smooth zero and 1 up on the long final glide of his 2:33 flight.  Paul Whitehead did an O/R to Goole in a flight of 2:11 in his Ventus, while Rob Bailey flew around Beverley, Malton and Thirsk in his ASG29 in a flight of 2:51, only getting to the 4,500' asl cloudbase once.  Les Rayment abandoned his attempt to get to Beverley and visited KirbyMoorside and Stamford Bridge instead, while Nick Gaunt landed out at Bagby in his LS7.  George Goodenough in  his Standard Cirrus, Tony Drury in his DG303  and Polly Whitehead in her ASW24 all stayed local with George having 2:11, Tony 1:29 and Polly 1:18.  Mark Newburn was the other private owner to fly and had two flights as he acclimatised himself to his newly acquired ASW20 on his 2nd and 3rd flights in the glider.  Graham Evison took Chris Thornhill, one of the week's 4 course members,  for just over an hour in K21 JVZ, while Martin Clowes had 2 flights in Astir DPO, the longest being 59 minutes.  The Tuesday evening group took over operations from around 1700 hrs and contributed 17 launches to the day's total of 50 off runway 20.