Wednesday 12th.  A slow moving depression covered the UK, its apparently flabby appearence belying its heavy and continuous rain which led to flooding in some parts of the country.    Only 2.3 mm fell at site but it and its associated low cloud put paid to any hope of flying.  Ron Beezer's course members had a lecture on the weather and came to the conclusion the rest of the week looked pants.  They were right.

Thursday  13th.  As expected, a day of rain and low cloud with another 6.4 mm falling, the light wind starting off from the SE and veering progressively into the W.

Friday 14th.  More of the same,  with the light to  moderate wind settling into the ESE.  However, a break in the rain did allow the Falke to have 2 flights, the cloud base being too low for any glider flying.

Saturday 15th.  At last a flying day, with 21 ATs off runway 20 and even 4 private owner flights.  Soaring opportunities were hard to come by although Jon May had 1:49 in his Ventus  and John Marsh 32 minutes in his DG303.  Two of the day's 5 First Flight pupils were also given flights in excess of 30 minutes courtesy of their high tows, while Chris Knapp flew the DG303, the only club single seater to fly.

Sunday 16th.  A light to moderate wind varying between SE and S meant another day of operations off runway 20, the launch total of the day being 19.  The period between 1215 and 1400 hrs provided some soaring opportunities with 3 of the 4 flights launched in this period yielding flight times in excess of an hour.  Jon May in his Ventus ventured almost as far as Malton in his flight of 1:34, while John Carter and Naomi Kennard in K21 KLW and John Marsh in his DG303 stayed local, with flights of 1:16 and 1:15 respectively.  Bruce Grain and Josuah Brookes, taking off towards the end of this period managed 45 minutes in K21 JVZ.  Nigel Burke and Colin Troise, flying the DG1000, bucked this particular trend by having 44 minutes later in the afternoon.  Michael Collins had two flights in the Ka8 and there were a further 4 First Flight pupils flown, with Brian Wise managing a 32 minute flight with one of them before flying came to a halt as showers loomed.

Monday 17th.  The UK was still under the influence of low pressure so the light to moderate wind varying between S/SW was accompanied by generally cloudy skies and a number of showers.  The day was notable for the proportion of First Flight pupils flown, 7 out of the 10 ATs off runway20, with only the club's 2 K21s flown.  However, Duncan Pask and Tony Drury showed that the day had some soaring potential with 50 minutes in JVZ while later Bruce Grain and Tony Wiseman had the day's longest flight of 53 minutes in KLW as the portion of the main bowl between Gormire and the climbing A170 provided some lift.  Flying came to a halt around 16:15 hrs but not before the Falke had 4 flights.

Tuesday 18th.   The day was forecast to end early as a small depression brought thundery rain to the SE corner of the UK, with increasing top cover for Yorkshire.  In the event, it stayed soarable late into the afternoon, so that David Watson, taking off at 16:09 hrs in the DG303 was able to soar for 1;30 and the Tuesday evening group, flying even later, could record two flights of over 30 minutes.  Initially, as  a light to moderate S/SW'ly blew, pilots reported some wave activity in a generally cloudy sky, with cloud base only around 1,500' QFE, but Steve Thompson, taking off in his Discus just before 1100 hrs, found no wave but thermal activity, so kept local until the cloud base had increased sufficiently to allow him to proceed on a 100 km FAI triangle around Northallerton, Harrogate North and Sutton on the Forest, a task which he completed successfully.  George Rowden, flying his LS8-18t, completed the same task as Steve, having also flown around locally until the cloud base had risen sufficiently.  While flying  the task both Steve and George were helped by a rapidly increasing cloud base, this rising to around 4,700' asl by mid afternoon and with the non-existent early finish to the day, both pilots regarded their task as underset.  John Ellis, flying his DG800, visited Pateley Bridge and Knaresborough but found the day a little difficult, as a number of good looking clouds failed to deliver any useable lift.   Steve, George and John all had flights of  between 2:30 to 2:45 while Tor Tavener, flying the DG303, had just over an hour.    The day's flying was well appreciated by a group of 15-18 yr olds who were visiting the club, as arranged by the Air League, this organisation seeking to introduce and encourage interest in aviation among young people.  The 2 seaters were therefore busy all day with Bruce Grain, Albert Newbery and Ian McFarlane between them flying most of the 14 young people and 6 accompanying adults who were visiting the club.  There was, however,  time for Albert and Peter Robinson to have the longest 2 seater flight of the day, 58 minutes in K21 KLW while the Tuesday evening group continued flying until well into the evening, the last flight landing at 2148 hrs, the wind having fallen light and the light having fallen.

Addendum.  A less than complete log and no Flarm in the Ka8 meant I was not able to report Phil Lazenby's flight of 1:45 in the Ka8 while visiting a number of local market towns in the late afternoon, cloud base at this time having risen to 5,000' asl.  Phil also sent me a photo of our newest solo pilot, Julian Gerretson, seen in the following photograph receiving his wings from his instructor Kelly Teagle.  So well done Julian. 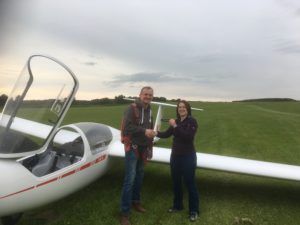