Wednesday 22nd.  A moderate W/WSW'ly blew all day, the air mass  generating good thermal conditions with a 5,000'+ cloud base  that led to 18 private owner launches and a rash of cross countries, some 17 in all, but some interfering wave in the lee of the Pennines led to some difficulties in getting to TPs in this area.    34 of the day's 37 ATs exceeded 30 minutes with 28 exceeding an hour, 21 of the latter exceeding 2 hours and 3 exceeding 5 hours, one of whom was Mike O'Neil who had 5:05 in Astir DPO.    John Ellis in  his DG800 was also a > 5 hr pilot, his 5:45 flight taking him around a 313 km task with TPs at Masham, Market Weighton, Barnard Castle and Burn.  Barry Kerby in his Duo Discus was the other >5 hr pilot, covering 259 km with TPs at Filey/Thirsk/Snainton and Ripon.  Barry was accompanied on most of his task by Rob Bailey in his ASG29, but Rob substituted Ripon for Thirsk as a TP and therefore increased his task distance to 285 km and also contributed this photo of Filey. 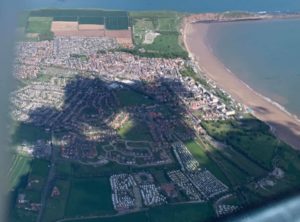 Martyn Johnson in his DG600 was one of the pilots to suffer from interfering wave, abandoning several attempts to get to Leyburn but still completing a task of 204 km with TPs at Catterick/Wetherby and back to Catterick.  Phil Lazenby joined in the cross country fiesta with a 2:42 flight in the Discus that covered 146 km with TPs at Ripon/Wetherby/Pocklington and Boroughbridge, while visitors Andy Backwill and Peter Challens took the DG500 around Masham and Knaresborough without ever getting out of gliding distance of Sutton due to the high  cloudbase.  It was also a day of some good energy lines with John Carter and Martin Clowes flying the DG1000 around Masham and Wetherby and only using a single thermal after passing Wetherby, John providing the trace for the flight which is shown below and also a photo of the conditions on the day. 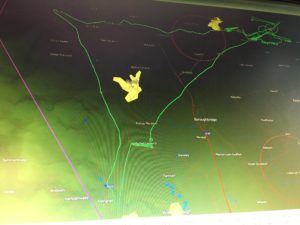 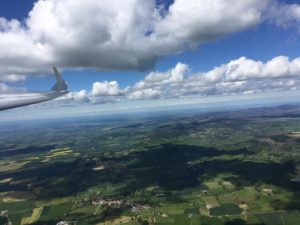 John and Martin later did an O/R to the Tontine in the same glider, with again no turning required.

Thursday 23rd.  A initially moderate SW'ly slowly veered into the W by the end of the day, early medium level cloudiness with Cumulus underneath slowly disappearing as conditions slowly  brightened.  The conditions led to a mixture of hill, thermal and some weak wave that resulted in 16 flights of over 30 minutes with 12 of these being over an hour.  Visitor Andy Backwill in his LS8-18 had over 5 hours visiting Knaresborough and Boroughbridge, while Barry Kerby, flying his Duo Discus solo, visited Ripon during his 4:41 flight.    Martyn Johnson, found some weak wave over Bagby that he persisted with to take his DG600 to 6,300' asl in his flight of 2:23.  Bruce Grain and Tony Kirby flying K21 JVZ had set the day off well with just over an hour off the first flight of the day, while Andy Parish and John Dore had exactly the same flight time as Bruce and Tony off the last flight of the day, Andy and John's flight being off a 1000' tow. In all 20 ATs were flown off runway 24 on another interesting soaring day at Sutton.

Friday 24th. A sunny day with isolated Cumulus started with a light NNW'ly that slowly backed over the course of the day into the W.   The conditions encouraged 11 private owners to launch and contribute to the 22 ATs flown on the day off runway 24, with 13 flights exceeding an hour and a further two exceeding 30 minutes.    Sea air incursions from the east and wave interference in the immediate lee of the Pennines made for some tricky flying conditions but nevertheless Rob Bailey in his ASG29 flew his 312.3 km declared task around Kirton in Lindsay, York East and back to Kirton in Lindsay while Martyn Johnson in his DG600 had to abandon his declared task due to wave interference en route to Pateley Bridge and instead flew an undeclared 152 km task around Market Weighton, Ripon and Masham.  Visitor Barry Kerby visited Kirby Moorside and Guisborough West in his Duo Discus while Andy Backwill and P McCauly also visited Kirby Moorside before going off to Danby in the DG1000.  Barry Monslow in his LS8-18 turned Northallerton and Pocklington and also recorded the highest climb of the day, reaching 6,500' asl.   Two seater pilots were also able to develop their soaring skills with Tom Stephenson having 1:08  in K21 with Andy Parish and P Moore having exactly an hour in K21 KLW with Bruce Grain.

Saturday 25th.  A light NW'ly was again in evidence at the start of the day but as on Friday, slowly backed and became SW'ly by the end of the day.  Operations were again primarily off runway 24 but later in the day, pilots  increasingly elected to land  on 20.  The day also became increasingly cloudy with rain eventually setting in around 1700 hrs from a warm front, but before then, 18 ATs were flown, with 10 of these exceeding 30 minutes but with only two of these exceeding an hour.  The day saw the first of the visitors from the Vintage GC arrive to start their week's visit to the YGC and Andrew Jarvis in his Olympia 463 was soon in the air and remained there for 2:15, being joined in the > 2 hour list by YGC member Darren Lodge in his LS8-18 with 2:04, as cloud base reached 4-4,500.  Other VGC members, David Cole in his Skylark 4 and Richard Moyse in his Sky were also early fliers although not joining the > 1 hr list, David having 46 minutes and Richard 37.  Most of the other flights to exceed 30 minutes were flown by YGC pilots, with Andy Parish and Chris Booker having 47 minutes in the DG1000, and Andy having 41 minutes with Tony Drury in the same glider on a day when no club single seaters were flown.

Sunday 26th.  A cold front from an Atlantic depression crossed the site during the early morning, delaying the start of flying until just after midday, the moderate SW'ly veering into the W and increasing to moderate to fresh as the front cleared to the east.  It was therefore a winching day and 19 launches were flown, with all but one exceeding 30 minutes flying time and 12 exceeding an hour.  VGC members Mike Armstrong in his Olympia 463 and Richard Moyes in his Sky both contacted wave with Mike reaching 13,600' asl and Richard 11,100' asl with Mike taking the opportunity to visit Ripon, Northallerton, Tontine and Boroughbridge, covering 145 km in the process and recording the second longest flight of the day, 3:34.  Jesper Mjels flying the DG303 for 3:54, reached 11,900' asl and John Carter with VGC visitor Ryan Hobson climbed K21 KLW to 8,700' asl in their comprehensive check flight of 1:39 which included hill, thermal and wave soaring, the latter being illustrated in the following photo. 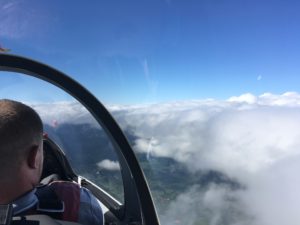 Hill soaring was the majority way of soaring for those not contacting the wave, with visitor Steve Codd in his ASK18 doing so for 2:47 and Nick Gaunt taking the Ka8 for 1:20 during which he flew to the Tontine and Northallerton.  VGC visitors Ken Reid flew the Astir DPO for 1:14 while John Marsh had 1:33 in the DG303.

Monday 27th.  A moderate WNW'ly meant it was a winching day again, but later on the wind veered into the NE and became light to moderate, so ATs became the order of the day, but these came to a halt around 1500 hrs as some heavy showers moved in.  After a short exploratory flight on the hill by John Carter and Bruce Grain in K21 KLW off the first flight of the day,   John and Colin Troise took off in the same glider and after initially struggling to stay aloft, eventually found some convective lift and landed after 50 minutes.  Albert and Martin Newbery were next off in their DG1000 and contacted a convergence to the north of the site which they used to  post the longest flight of the day, 2:11, while later, from the last of the day's winch launches, Bruce Grain and Dave McKinney struggled to get above 500' QFE in KLW on a increasingly soft hill and landed after 23 minutes.  This signaled the end of winching for the day, and thereafter 8 ATs were flown before the heavy showers arrived.  Andrew Jarvis in his Olympia 463 posted the only > 1 hr flight from the day's ATs with 1:01, while another VGC member, Gary Pullen, flew for 38 minutes in his Foka 4, all the other AT launches resulting in non-soaring flights.  The day ended with a Pizza night for the VGC members, and the bar running out of beer, which your scribe took to mean a good night was had by all.

Tuesday 28th.   A trough over the East Coast meant a day of low cloud and showery outbreaks of rain, the wind veering from an initial WNW'ly direction to become N'ly, its strength being light to moderate.  The showers eventually moved away and the brightening skies, albeit with continuing low cloud, did allow some flying to take place from late afternoon and continue into the early eventng for the benefit of the Tuesday evening group.  A plan to provide Bruce Grain with some supervised tugging practice, Steve Cobb in his ASK18, being the willing victim, had to be scrubbed due to the low cloud but Bruce had some touch and go practdice off and onto runway 02 with John Tayler providing both the supervision and the tug, his Super Cub, as the following photo shows. 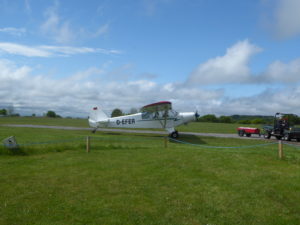 This aviating was then followed by the activities of the Tuesday evening group who managed 7 launches behind Pawnee Tango Mike and a succession of circuits in the absence of any lift.  None of the VGC visitors flew as evidenced by the following photo which shows some of the VGC's gliders parked at the side of runway 20/02. 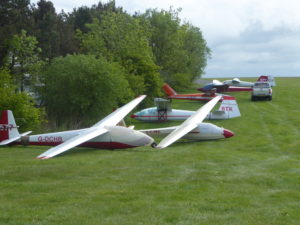 However, a knitting demonstration by the Thirsk Yarnbombers during the afternoon, complimented by tea and scones provided by Liz, entertained and informed many of the lady visitors associated with the VGC as shown below. 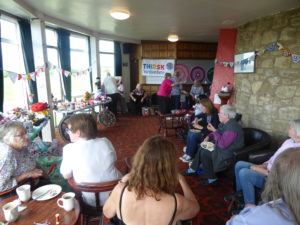