Sunday 19th.  A light, mainly SW'ly wind blew with operations off runway 20 getting underway around 10:20 hrs and continuing until the last flight landed at 16:15 hrs, the day's launches totalling 30.  The private owner launch total of 11 owed a lot to the visitors from the Stratford GC and they also contributed the 2 cross countries of the day, Andy Balkwill in his LS8-18 visiting Northallerton's and Pickering, the latter TP also being visited by Barry Kerby and Barry Monslow in the Duo Discus,   Andy's flight time of 3 hrs and the Barry duo's of 2:16 were the longest of the day, and were two of the 8 flights to exceed an hour, with visitors Dan Brown, Sharon Kerby, Neil Crocksford  and Jeff Gale also in this particular list.   YGC pilots Steve Ogden in Astir HVK and Tony Drury in his DG300 were also > 1 hour pilots but while Steve landed back at site, Tony landed out.   The initial thermal conditons did not last as some large storms developed with  overconvection, leading to overcast skies and a brief period of suspended operations also resulted as a spectacular funnel cloud developed close to the site as the following photo shows.  Due to the trees it was uncertain whether the funnel touched the ground and became a tornado. 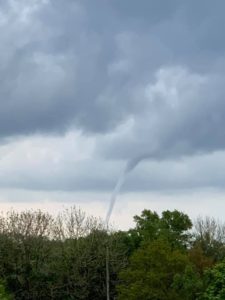 Monday 20th.   The prospect of fewer showers as pressure slowly rose led to hopes of a longer soaring day, but  some large storms again developed, with one to the NW of the site coexisting with a sea breeze front over the site to provide some very strong lift during the middle of the afternoon.  Before this, there was plenty of local soaring and a couple of cross countries as a light to moderate, mainly W'ly wind blew. The cross country pilots were  Barry Kerby who flew his Duo Discus solo around Nothallerton, Barnard Castle and Harrogate North to cover 151 km and Rob Bailey who did a multiple shuttle between Sutton Control Point North and Sutton on the Forest, with a visit to Northallerton added  for fun, the total distance covered being 123 km. Barry and Rob's flight times of around 2:30 were the longest of the day, but Barry Monslow in his LS8 and Sharon Kerby in her ASW28 were also > 2 hr pilots.  Neil Croxford in his LS4, Steve Brown in his  LAK 19 and YGC pilot Chris Ogden in Astir HVK all had around 1:41 hrs.  The opportunity for some mid afternoon soaring along a vigorous sea breeze front was gladly accepted by John Carter and Martin Clowes in the DG1000 as part of the week's cross country course, they enjoying  themselves for just over an hour, while Adrian Flowers in Astir HVK (54 minutes) and Mike O'Neil in Astir DPO (43 minutes) also took advantge of these conditons.

Tuesday 21st.  A day with no showers but with an early finish to convection was forecast, as a light to moderate WNW'ly blew.  Cumulus started to form by mid morning resulting in a queue of  cross country pilots eager for a launch off runway 24.  However, those launching early found a relatively low cloud base, below 3,000' asl and some weak thermals that made progress away from the site somewhat slow.  Conditions improved as the day wore on with the cloud base rising to between 4,500 and 5,000' asl, thermal strengths increasing and even a sea breeze front to utilise east of Pickering.  By the end of the day, and bolstered by the Tuesday evening group, the AT total was 46, with 2 flights of over 5 hours, 2 over 4 hrs, 3 over 3 hrs, 7 over 2 hrs and 5 over an hour.  The 5+ hr flights were by John Ellis in his DG800 who covered 325 OLC km in visiting Hawes, Leyburn and Beverley, while Bill Payton and Albert Newbery in their DG1000 flew 282 km with TPs at Camphill, Pontefract and Scunthorpe.  The cross country list did not end there, however, with Andy Balkwill turning Burn, Leyburn and Harrogate N in his LS8, Barry Kerby and Ian Roberts visiting Knaresboroiugh, York East and Goole in Barry's Duo Discus, Dan Brown North Duffield, Knaresborough, York East in his LAK 19, Rob Bailey Hawes, Garforth, Beverley and  Malton in his ASG29 while Nick Gaunt flew his LS7 around Northallerton, Pateley Bridge and Ripon.  The Sutton/Pocklington/ Rufforth/Sutton 100 km triangle was popular, this being flown by Philip Cahllans in the DG303 and twice by John Carter in the DG1000, first with Mike O'Neil in the morning and then with Martin Clowes in the afternoon as part of John's cross country course.  The following photos of the launch point and attractive looking sky and York were provided by John. 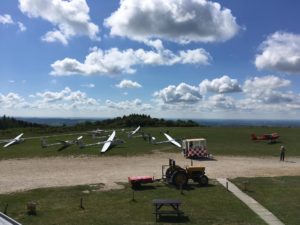 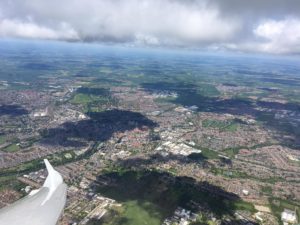 The Sut/Poc/Ruf/Sut triangle was also the chosen task for Rob Bottomley in the Discus and visitor Neil Croxford in his LS4, but Rob landed out at Full Sutton and Neil in a field just to the east of the site after abandoning  the triangle and not quite making it back from Pocklington.  George Rowden flew a different 100 km triangle with TPs at Northallerton, Harrogate North and Sutton on Forest, before going east to investigate the sea breeze front, covering 174 OLC kms in the process.  The attractiveness of the day can be judged by the fact that all the club 2 seaters, all the club single seaters bar the Ka8 were flown, while 19 private owners also launched.