Tuesday 19th.  A bright start to the day didn't last, but the later cloudiness didn't detract from a good soaring day, as the moderate WSW'ly generated consistent hill lift and some early year thermals.  The day's 16 ATs off runway 24 led to only 2 failing to achieve flight times of greater than 30 minutes, with 5 exceeding an hour.  Jesper Mjels  had the longest flight of the day, 2:30, during which he flew Astir HVK to the forward ridge, getting low at times as you may be able to see on the following photo provided by Rob Bailiey.  Jesper's the dot on a low level inspection of some new Forestry tree plantations.

Steve Thompson, flying Astir DPO, went somewhat further north along the main ridge to do an O/R to the Tontine in his flight of just over 2 hours.   In between these two, in terms of explorations north, one of the flights in the DG1000 ventured to Black Hambleton, but I am unsure whether that was by John Carter and B Ambler during their 1:59 flight or by Steve Thompson and Peter Robinson in their 1:01 flight.  Similarly, I am not sure whether it was Rob Bailey or Jesper Mjels who flew the DG303 to Northallerton in their flights of 1:14 and 54 minutes respectively.

Wednesday 20th.  Low cloud delayed flying until after midday as a light to moderate SSE'ly became a moderate S'ly from around 1300 hrs, with the limited flying day restricting launches to 4, all off runway 20.  John Carter and Keith Davey found some wave off the first flight of the day but with the slot closing had to land after just 21 minutes after having climbed to around 4,500' asl in K21 JVZ.  A photo supplied by John illustrates the conditions. 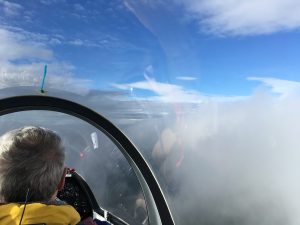 Later flights managed longer flight times with Jesper Mjels flying the DG303 for 1:15 and getting to 4,000' asl, while John Carter and Nora v G had 35 minutes in JVZ of the last flight of the day.

Thursday 21st.  The initally moderate WSW led to some morning wave and hill lift but these providers of long flight times disappeared as the wind steadily decreased in strength to become light by the end of the flying day.  Consequently, all the longest flights of the day were flown before 1300  hrs with nobody exceeding 30 minutes on the 6 launches flown after this time, although with 4 of these only being tows to 1000' QFE, this is not too surprising.  Alan Beaumont, flying K21 JVZ solo off the first launch of the day had 1:35 as he climbed to 5,600' asl, with Paul Whitehead and Dhruv Gopala getting to 3,800'asl in the DG1000 as the wave declined, leading them to  land after 57 minutes.  In between these two flights there was one for the day's only First Flight pupil and the other by Bill Payton, who made the most of the conditions and took the DG303 for a tour to the eastern part of the Pennines, visiting Harrogate North, Ripon and Pateley Bridge, but not quite getting to Hawes in his flight of just under 3 hours, during which he climbed to 8,300' asl.

Friday 22nd.   A light to moderate ESE'ly, sunny skies and the continuation of the unseasonable warmth, 14C, made for a pleasant, if unspectacular day of gliding, with the only vestiges of lift being late in the day as the sun warmed the slopes of the southern ridge to produce some rising air that delayed the inevitable return to earth by a few minutes, although only Mike Greenacre, flying Astir DPO earlier in the day, managed to exceed 30 minutes flying time. DPO proved to be a popular mount, as Peter Guest and Andy Tyas both flew it, with Andy having two flights, while Steve Ogden had a flight in the DG303.  Two seater duties were shared by Paul Whitehead and George Rowden in either K21 JVZ or the DG1000, with George flying Nick, a returning First Flight pupil,  3 First Flight pupils, 2 of whom were the twin sons of Nick, and Harris Duckworth, a 14 year old new junior member, for his first glider flight, this to add to the 8 flights he had had in a Grob as a member of the ATC.  Paul, on the other hand flew a succession of members, checking out Peter Guest, Alistair Brown and Martin Clowes before their return to solo flying and also, off the last flight of the day, confirming  Polly Whitehead's spin recovery capabilities.  In all, the day produced 22 launches off runway 20, all behind the Eurofox with John Carter on tugging duties.