Thursday 7th.  Early morning rain from a light WSW'ly air flow ceased around 1000 hrs, having deposited 17.8 mm, but the clrearance led to the wind increasing to become moderate to fresh with gusts into the high 20's, these conditions being considered to be too rough for flying.

Friday 8th.  The windiness of Thursday continued into Friday as storm Eric affected the UK the, by now, SW'ly wind increasing to fresh and gusting into the mid 40 kts, preventing any flying.

Saturday 9th.  One of storm Eric's fronts crossed the site overnight, depositing a further 8.4 mm of rain, and although the fresh to strong W'ly wind,  with gusts in excess of 40 kts slowly moderated during the day, conditions suitable for flying were not reached.

Sunday 10th.  Storm Eric had by now moved sufficiently far away to allow flying to be undertaken, the wind being a mainly light WNW'ly that later backed into the SW.  Take offs were initially off runway 24 but then changed to 02, but the curl over from the ridge meant  that only 5 launches were undertaken before flying ceased for the day.  In the absence of any workable lift. flight times were in the range 13-21 minutes, with Colin Troise managing 21 minutes of the last flight of the day flying K21 JVZ solo.  The  day also saw 3 Falke flights, while the simulator was busy as additional instructors got to grips with the new simulator set up.

Monday 11th.   A light NW flow and sunny skies saw operations commence off runway 25 but later re-locate to runway 02.  By early afternoon, Cumulus had started to appear and an early thermal day resulted, although, with a relatively low base and weak lift, only a couple of flights found sufficient atmospheric energy to extend flight times.  Rob Bailey, taking off around 13:30 hrs in the Discus, had 57 minutes, while Bruce Grain, who will be our summer instructor, introduced himself to the site and club by having 32 minutes in Astir HVK followed by a flight in the DG303 and 2 flights with pupils, one in K21 JVZ with Phil Turner and the other with Josh Abbey in the DG500.   No one else managed in excess of 23 minutes, the 23 minute slot being the sole domain of John Carter and George Goodenough in K21 JVZ.

Tuesday 12th. A light to  moderate SE'ly opened the day, but this soon changed to become a moderate to fresh SW'ly, as a cloudy high pressure started to dominate the weather.  Sunshine was at a premium, but there was wave lift to be exploited, height gains being restricted by the lack of stable slots and the launch total restricted by a lack of demand.  John Carter and Phil Turner got the day off to a good start with a 57 minute flight in K21 JVZ, climbing to around 5,100' asl, and they were followed by Graham Evison and Josh Abbey who took the DG500 to around 4,500' asl in their flight of 45 minutes.  The day's glider flying was completed by Bill Payton who took Astir HVK to around 4,900' als in his flight of 37 minutes.  The day also saw a single Falke sortie and further instructor training on the simulator.

Wednesday 13th.  Wave was very much in evidence as a moderate SSW'ly blew, a large wave slot sitting just upwind of the site.  Steve Thompson and Tom Wiseman were first to AT off runway 20 and readily contacted the wave. eventually climbing to around 10.000' asl.  Having determined that their trusty steed, K21 JVZ, was not wanted back at the launch point, they went on to complete an undeclared 187 km cross country (220 km on handicap) visiting a self chosen TP near Catterick, and then Harrogate North, Leyburn and Wetherby before returning to Sutton after 3:37.  Their attempt to reach both Catterick and Aysgarth was frustated by both turning points being in heavy sink and under cloud, an attempt to get to Catterick seeing them lose a lot of height and enter cloud.  They did, however, enjoy cruising along in the strongest part of the lift at between 80-90 kts while maintaining altitude.   Most of the remaining 5 flights reached between 9 and 11,000' asl, with John Carter geting to around 10,000' asl with first Bruce Grain and then Andy Evans, both flights in the DG500, with Bruce then flying with Peter Robinson in  K21 JVZ and climbing to around 9,500' asl.   George Rowden, flying Astir HVK got to 10,700' before breaking off his 2 kt climb (no oxygen) while Andy Evans took the DG500 solo for the last flight of the day and climbed to around 6,500' asl in his flight of 40 minutes.  All the day's flights, apart from Andy's, exceeded an hour, most being between 1:00 and 1:24.  Some photos from the day provided by John Carter and Steve Thompson show the large wave slots near site but much cloudier conditions to the north and west.  The upper cloud shown on some of the photos resembles that produced by an hydraulic jump, based on a chapter in a book I am currently reading. 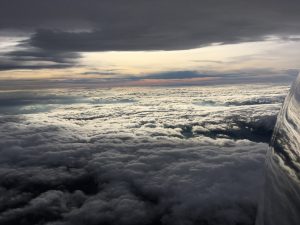 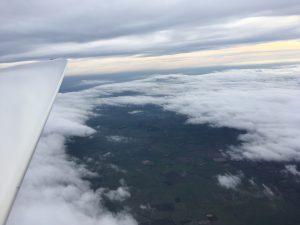 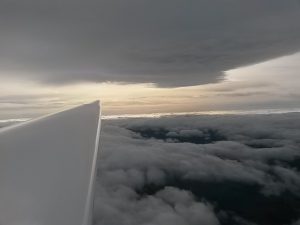 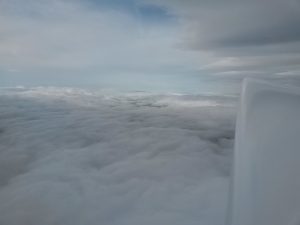