Thursday 14th.  The wind  had become a light to moderate SSE'ly that slowly backed into the ESE as high pressure continued to dominate the weather and bring unseasonal warmth to the UK.  A thin high cover didn't detract from a predominately sunny day, but it was not one that produced any significant soaring opportunities, so flights struggled to exceed 30 minutes, with only 2 of the 20 on the day doing so.  John Carter and John Dore had 34 minutes in the DG1000 and were joined in this select band of > 30 minute flights by Nigel Burke, who had 31 minutes in the DG303.  Polly Whitehead and Jim McLean in K21 JVZ and Duncan Pask in the DG303 came close with 29 minutes each on a day when there was a single First Flight pupil, who Tony Drury took for a 26 minute flight in the DG500.  Finally, our most recent instructor, Bruce Grain, flew with Mike Wood, who gave up instructing some while ago after many years in that particular saddle, and had 28 minutes in JVZ

Friday 15th.  A light to  moderate SE'ly opened the day, a day of hazy sunshine and continued unseasonal warmth, with flying getting underway just after 1000 hrs off runway 20 as Dave Campbell and Tony Kirkby took K21 JVZ for a 22 minute flight.  22 minutes proved to be a popular flight time with 3 of the other 13 flights of the day recording that value, due to the lack of any significant soaring opportunities.  22 minutes, however, did not represent the longest flight of the day as Paul Whitehead took K Langley, one of the 3 First Flight pupils of the day, for 24 minutes in the DG1000 while Peter Guest, flying with Bruce Grain  in the DG500,  went for circuit practice rather than duration by taking two 1000' tows behind the Eurofox.  The day's pure glider flying was augmented by 2 flights in the Falke as pilots honed up  their field landing skills.

Saturday 16th.  The wind had picked up to become a moderate SW'ly, this backing into the S towards the end of the day, and with sunny skies predominating, it was a very pleasant day on site, and an even pleasanter one when flying, as some portions of the hill provided an means of defeating gravity and there were even some weak thermals to make use of.  The conditions provided an incentive for people to fly and 36 ATs off runway 20 resulted, with the Eurofox providing the majority of the tows and Pawnee Tango Mike assisting.  17 of the day's flights exceeded 30 minutes, with 4 lasting over an hour. Darren Lodge flew the Discus for 1:34,  Duncan Pask had 1:04 in Astir HVK, Nigel Burke had 1:01 in the DG303 and Derek Smith and Andy Wallace had 1:11 in the DG1000, adding on 3 much shorter flights in the  DG500 later in the day off 1000' tows.  Bill Payton, with 58 minutes in the Discus and Tony Drury and his First Flight pupil with 51 minutes in the DG500, headed the > 30 minute list and the day's conditions can be nicely summed up in the following photo provided by Kelly Teagle. 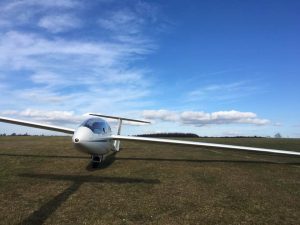 After the end of flying, members gathered in the briefing room to hear the latest in a series of Winter lectures, this one being provided by Steve Thompson on the subject of Field Landings and a very thorough, informative and, at times, amusing talk it turned out to be.  If you missed it, Steve has left the slides on the briefing room computer.