Sunday 17th.  A bright start to the day didn't last as cloudy skies gradually developed, but these were not a limitation to flying, the base being reasonably high.  Operations were off runway 20 into an initially light to moderate ESE'ly wind, but this soon veered into the S and increased to become moderate, providing some weak lift along the southern ridge that led to a number of flights of around 45 minute duration.  All but one of the flights were dual in either K21 JVZ or the DG1000, 5 of these being for Scouts, with Nora v G the only pilot to fly solo, making the most of the occasion by posting the second longest flight time, 48 minutes in Astir HVK, as she explored the ridge eastwards as far as Wass.  Andy Hatfield, flying one of the Scouts in JVZ, bettered Nora's time by a minute, while Steve Thompson and David Westgate had a minute less than Nora , exploring the southern ridge beyond Ampleforth in JVZ with 6 of the day's 15 flights exceeding 40 minutes.  Nora has provided some photos of the day which are included below. 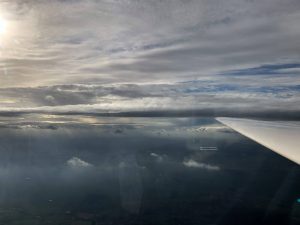 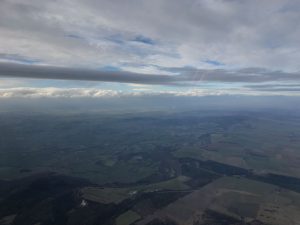 Monday 18th.  A light to moderate SSE'ly meant operations off runway 20, the first flight seeing John Carter and Ethan Hall find some lift off the south facing portion of the main bowl but restricting their flight to 17 minutes as rain from a weak cold front threatened the site.  The front, with its cloud and patchy rain, led to a cessation of activity for 1:45, the veering of the wind into the SSW leading to operations recommencing off runway 24, although runway 20 was used for some of the subsequent landings.  This second period of activity saw 10 further ATs flown behind Pawnee Tango Mike, with K21 JVZ,  the DG500 and the DG1000 providing mounts for dual flights and Astir HVK and the DG303 mounts for solo pilots.   The post frontal flying provided some weak wave, hill lift and some strong thermal with 2 flights exceeding an hour and an additional 6 exceeding 30 minutes.  Duncan Pask had 1:29 in the Astir while John Carter and Ken Duxbury took a high tow in the DG1000 in order to do some spinning exercises but had to abandon that option as cloud filled in below them.  However, getting clear of the cloud, they found some strong thermal lift that took them back to a height that enabled them to complete their intended exercise, the whole flight taking just over an hour.  Jan van de Hook took JVZ solo for 58 minutes, while Tony Drury took  Lizzie Mackay, one of the 3 First Flight pupils of the day, for 47 minutes in the DG1000 and Conrad Thwaites had 42 minutes in the DG303.  Flying came to a halt around 15:15 hrs as a shower threatened and the wind became increasingly gusty.  A photo of the DG500 about to be put away for the night is shown below. 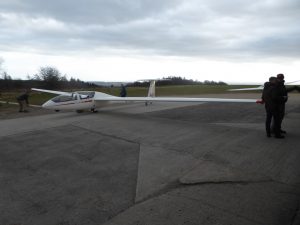