Saturday 23rd.  A day of parially sunny skies, light to moderate winds from the SSE and the unseasonably high temperatures were all the result of the continuing dominance of a large anticyclone over continental Europe, the other main feature of this synoptic situation being an absence of any useable lift.  Consequently, while members enjoyed the sunny and warm weather, none of the 13 ATs of the day off runway 20, all but one in either K21 JVZ or the DG1000, were able to break the 30 flight time barrier, the best that was acheived being the 24 minutes flown by Bruce Grains and Ian Bullous in the DG1000.  Bruce quickly followed this with 23 minutes in the same glider, this time with Chris Ogden, while Graham Evison, flying one of the 2 First Flight pupils of the day, had 22 minutes in JVZ.  Duncan Pask, flying the only solo flight of the day in the DG303 had 21 minutes.

Sunday 24th.  A light to moderate ENE'ly soon veered and lessened to become a light SE,ly as sunny skies again predominated.  The silky smooth conditions made for pleasant if relatively short flights, the 9 ATs from runway 20 generating maximum flight times of 19 minutes, these by Brian Wise and a Guest of Max Rutter in the DG500 and by Bruce Grain and Max Rutter himself in the same glider.  John Carter, off the first flight of the day, and later Martin White, both flew K21 JVZ solo.  The day also saw 2 flights in the Falke, one of which was for the only First Flight pupil of the day.

Monday 25th.  Flying was delayed until midday, not because of the usual reasons, low cloud, rain or high winds, but because fog in the surronding Vales of York and Pickering obscured any potential land out fields in the event of a failed launch.  This fog cleared to allow the lowlanders to enjoy the bright blue skies, sunny and warm conditions which had been enjoyed all morning at site and during the afternoon 10 ATs were flown off runway 20, a light to moderate ESE'ly blowing all day.  2 seater flights in either K21 JVZ or the DG500 made up the bulk to the activity, with the day's two First Flight pupils registering the longest flights of 26 and 21 minutes in the DG500, Tony Drury being P1.  Jan van de Hook flew Astir DPO twice, but the non soarable nature of the day was illustrated by his total flight time of 28 minutes.

Tuesday 26th.  Clear blue skies, a warm sun and a light SE'ly wind was the lot of both lowlanders and uplanders from the word go, the highest ever recorded UK winter month temperature of over 21C at Kew Gardens having an equivalent for the YGC of 15,5C, even the overnight temperature not dropping below 10.4C.  Along with these unprecedented temperatures was a relative humidity mimimum of 33% as the continental anticyclone continued to dominate the weather.  Flying got underway around 1045 hrs, where else but off runway 20, and continued all day the last flight landing just before 1700 hrs, the launch total being 24, all in either K21 JVZ or the DG500.  The silky smooth conditions above a low inversion were ideal for training  with Chris Thompson and Josh Abbey  making the most of the opportunity, while Andrew Bedford was checked out and flew JVZ solo later in the day.  John Tayler and Fred Brown alternated P1 status on their 2 flights together in JVZ, while additional solo flights were provided by Bob Spiller, with 2 flights in  the DG500  and Chris Thirkell with one, followed by Tor Taverner who had 2  flights in JVZ.  George Rowden and Peter Clay had spin checks with John Carter in the DG1000, with Peter also having field landing practice with Albert Newbery in the Falke, an option also taken up by Duncan Pask.  The day's 2 First Flight pupils were supplemented late in the day by 2 others, who, passing by on the public footpath, were persuaded to fly by Chris Thirkell.  So, although the day was not one of long flights, the longest being 28 minutes, the summery conditions were enjoyed by all, either in the air or on the ground as the following photos illustrate. 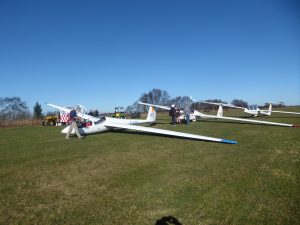 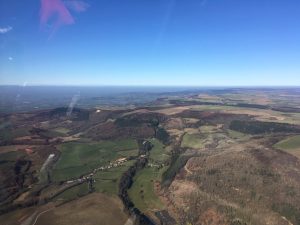 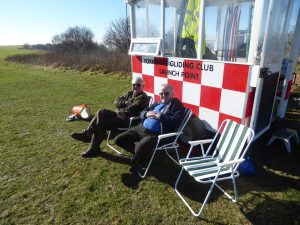 The sun was still shining brightly as flying ended for the day, as shown below. but was not over in terms of activity, as Steve Thompson gave the first part of a  talk on the weather, the second part being scheduled for Tuesday 5th March. 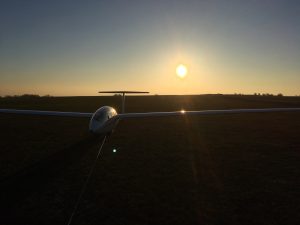