Tuesday 8th.  A sunny and cool day saw a single launch, as John Carter and Phil Turner took an AT off runway 02 to to investigate take off and landing conditions in a light to moderate NWly.  Returning to earth after 14 minutes, the conditions were declared too turbulent for any further flying, this decision becoming even more relevant as the conditions became even  gustier as the day progressed.  However, this wasn't the end of activities on the day, as in the evening, the Tuesday evening group with other members assembled to listen to Steve Thompson's antedocal presentation of his many and varied landing out stories before heading down the hill to the Whitestonecliffe Inn for a  dinner to celebrate a successful 2018 and anticipate an even more successful 2019 of Tuesday evening flying and associated learning.  The 21 attendees enjoyed a riotous evening in which party poppers were liberally popped and balloon helicopters enhusiasticaly flown and every attendee was presented with a certificate recording their particular and unique contribution to the group during 2018.  A flavour of the awards can be deduced from  the fact that Graham Evison's certificate recorded that he had the knobbliest knees of the group, proudly displayed via the wearing of a variety of shorts no matter what the weather.  Steve Thompson and Ron Beezer made the presentations with Steve's certificate noting his hopelessly displaced but ever present optimism and Ron's his stealthy wave catching technique  A selection of photos is given below from which can be deduced that a good time was had by all.  The first two photos show some of the attendees while the third shows Dick Cole receiving his certificate, for what other reason than making sure the tugs were servicable for the group. 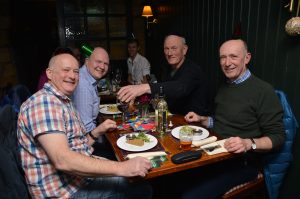 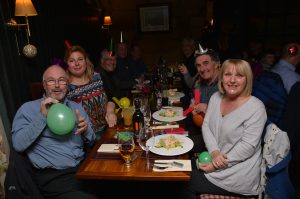 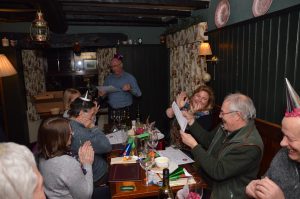 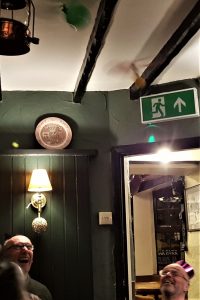 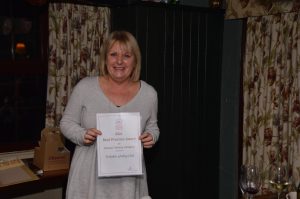 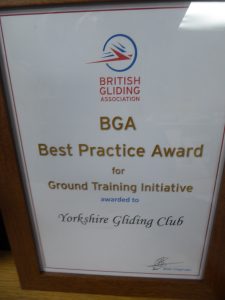 The photo above shows one of the evening's balloon helicopters flying, while its neighbour to the right show Polly Whitehead displaying the BGA Best Practice Award for the Ground Training Initiative introduced in 2018 of which Polly was a leading light.  A closer picture of the award certificate is shown on the right.

Wednesday 9th.  The NW'ly wind  had moderated a little compared to Tuesday, but there was no flying as the airstream contained a multitude of showers which as well as dampening the airfield dampened any hope of flying.

Thursday 1oth.  The persistent high pressure system over the UK meant the wind was again from the NW'ern quadrant, but this time was a light to moderate WNW'ly accompanied by an overcast at around 3,000' QFE.  Flying commenced around lunch time when the first of the day's 2 First Flight pupils took off from runway 24 in the company of Paul Whitehead for a 20 minute flight.  4 other ATs followed, with a second First Flight pupil and 2 members taking to the air, all the flights being in K21 JVZ.  Peter Goodchild took 2 flights with Derek Smith, each to 4,000' AFE and managed to eke out a 23 minute flight, the best of the day.

Friday 11th.   The overcast trapped under the high pressure had become lower, cloud base being around 2,500' QFE, and the wind had become a light WNW'ly, becoming non-existent around midday before picking up again.  9 ATs were flown off runway 24, all in K21 JVZ, with Tony Drury taking the first 3 flights with First Flight pupils and recording the longest flights of the day at 22 minutes.  Thereafter,  members Kevin and Liz Kiely, David Westgate, Andy Wallace and Ian Johnstone kept up their flying currency, with Andy and Ian flying KFV solo.

Saturday 12th.   Another cloudy day but this time with occasional sprinkles of rain as a light to moderate WSW'ly blew, this tending to increase as the day progressed.  Two early launches via AT confirmed two things, one, that  the hill was working and 2, the departure over the edge of the hill beyond the end of runway 24 was turbulent, so the winch was then deployed and kept busy with a further 14 launches flown off runway 24.  The hill lift proved to be reasonably consistent although obviously under wave influence, hill soaring heights being from over 1,000' QFE at times to 600' QFE at other times.  The 3 available 2 seaters were kept busy flying members, 7 Scouts/Scouters from Leeds and 4 First Flight pupils, while Astir DPO and the DG303 were flown by Toby Wilson and Bill Payton respectively.  Toby notched up the longest flight of the day, 1:11, with Les Rayment and Conrad Thwaites having just over an hour in the DG1000.  During their flight they explored the forward ridge and considered a foray further north before deciding it wasn't on. In addition to these 2 flights of over an hour, there were 6 over 30 minutes, turbulence on the approach leading to some interesting times for pilots and spectators alike.   Flying came to a halt around 1430 hrs due to rain, and by the time this had cleared it was too late to recommence flying.  The day proved to be a good one for Toby Wilson, for as well as  having the longest flight of the day, he was checked out for undertaking First Flight launches on the winch by Paul Whitehead.  The achievement was later marked by the ringing of the Dishforth Bell and Toby funded drinks for those attending the post flying bar.  That was not the end, however, as Kelly Teagle kicked off the winter lecture programme with a Wave for Beginners talk to an audience that included pilots from Pocklington and Rufforth.  The presentation was followed by an informed discussion.  Kelly had noted in her presentation that one of the dangers of wave flying was encountering much higher wind speeds at altitude and inadvertently drifting downwind,  particularly if above cloud. This was graphically emphasised by the fact a DG505 from Rufforth had landed out that day, after climbing above cloud and drifting 7 miles downwind of the airfield.