Sunday 30th.  A light to moderate WSW'ly blew all day under generally sunny skies with the intermittent cloud cover not proving to be a problem.  10 ATs were flown off runway 24 with some landings on 20 and a combination of hill lift and some weak wave meant that 8 of the day's flights exceeded 30 minutes, with 2 exceeding an hour.  K21 JVZ and the DG1000 shared the dual flying on the day, with the DG303, the DG500 and the Ka8 being the steeds of the 4 solo pilots who flew.  John Carter and Matt Beckett had the longest flight of the day, 1:13 in the DG1000, getting to the East Coast main line, while John Marsh had 1:10 in the DG303, with Jamie Quartermaine, 53 minutes in the DG303 and Tony Drury and Mile High pupil Allison Watson-Shields with 47 minutes leading the >30 minute <1 hour  flight list.  While Tony and Allison didn't get above their launch height, Jamie managed to climb around 1,600' to a maximum altitude of just over 5,000' asl, while Mike Collins got to 4,400' asl in the Ka8.

Monday 31st.  The WSW'ly flow continued, starting off light to moderate, but increasing to moderate from midday with 25 kt gusts.  Wave was evident from early on and this, plus back up hill lift, resulted in all but one of the 8 ATs on the day exceeding an hour, with some useful wave climbs to add to the interest.  Bill Payton and Naomi Kennard had the longest flight and the best climb of the day, 2:43 and 10,500' asl, with most other people being content with flights between 1-2 hours and climbs to between 5-6,000' asl, although Steve Thompson and Pete Ryland flying K21 JVZ climbed to 8,200 asl in their flight of 1:20, sharing the 12 points their recorded height gain generated on the BGA Ladder.  John Marsh, Darren Lodge and Tony Drury all had solo flights of between 1:45 and 1:11 in either the DG303 or the Discus, while Steve Thompson amassed a day's flight time of just under 4 hours, two of his 3 flights being with Iain Robsoncross.  John Carter and Mark Newburn flew the last flight of the day, landing at 1544 hrs after a flight of 1:30 and climbing to 5,800' asl, from where they were able to enjoy a beautiful setting sun and skyskape as the following photos from John illustrate. 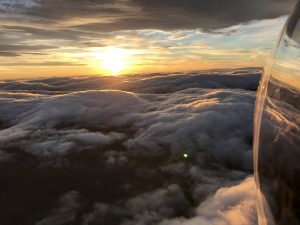 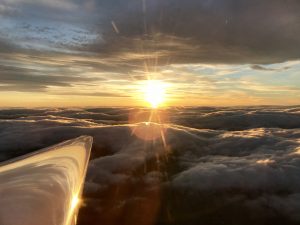 Tuesday 1st January 2019.  The first day of 2019 was sunny, but a moderate NW'ly wind meant it was a non-flying day due to the perceived problems of turbulence on take off, although minimum custom also was a factor.

Wednesday 2nd.  The continuing NW'ly flow had decreased to light to moderate so operations were planned off runway 02 behind Pawnee EV.  However, frequent light snow showers with an associated low cloud base meant the start of flying was delayed until  1245 hrs, but the afternoon was dry with a maximum cloud base of around 3,000' asl.  The temperature had also risen sufficiently for the ice which had formed on the wings of JVZ as it stood at the launch point to have melted and been squeegee'd off prior to the first launch.   6 ATs were flown, all in K21 JVZ, with new member Max Rutter, Alisdair Brown and Nora van G each  having 2 flights.  Max and Alisdair had John Carter as P1 on both their flights but after an initial check flight with John, Nora took  the last flight of the day solo.  With no lift to utilise and a restricted launch height due to the cloud, flight times were between 10 and 13 minutes.