Wednesday 28th.  Storm Diane brought a succession of fronts across the UK, the associated low cloud and rain,  together with strong and gusty SE'ly winds, ensuring it was a non-flying day.

Thursday 29th.  Another windy and wet day in the aftermath of storm Diane led to a further non-flying day.  A clearance around 1300 hrs lead to the cessation of the rain, while the morning's wind changed from a fresh to strong SE'ly to a moderate WSW'ly during the afternoon, the change coming too late to allow flying to take place.

Friday 30th.  A SW'ly wind of very variable strength and frequent showers led to a day's launch total of 1, Colin Troise and Chris Thirkell taking K21 for a 20 minute flight off an AT

Saturday 1st December.  Another depression brought a further 8.4 mm of rain to the site, this falling throughout the day and preventing any flying.  Initially from the E, the light to moderate wind increased to moderate before veering into the ESE around 1300 hrs and then decreasing in strength to become light by nightfall.

Sunday 2nd.  Another non-flying day as low cloud, accompanied by rain at times, shrouded the hill for part of the day, the light SE'ly increasing in strength post 1300 hrs as it veered into the SW.  The lack of flying did, however, allow some intrepid members, somewhat prematurely full of the Christmas spirit, to forage some seasonal greenery for the clubhouse, as the following photo shows. 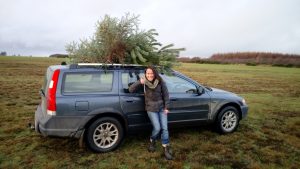 Monday 3rd.  A depression tracking eastwards across the south of the UK extended its high cloud over the site but not its rain, the high cloud slowly disappearing off to the east to give a sunny afternoon.  Flying commenced around 1230 hrs off runway 02 into a light WNW'ly, although some earlier flights in  the Falke had been off runway 24.  The day's 9 ATs inlcuded 4 for First Flight  pupils and Fred Brown, Polly Whitehead and Ian Johnston took advantage of the conditions to each fly K21 JVZ solo.  A distinct lack of lift meant it was a definite circuit day with Albert Newbery and one of the day's First Flight pupils, A Helliwell, topping the endurance stakes with 24 minutes in the DG1000.

Tuesday 4th.  A sunny, if frosty morning with a very light SSW'ly blowing, saw operations commence off runway 20 around 1040 hrs, 17 addtional ATs being subsequently flown before misting canopies led to flying being abandoned around 1530 hrs.  The early sunshine slowly lessened as the high cloud from an advancing depression slowly spread in from the SW, but those flying in the morning were treated to excellent visibility and the sight of fog filled valleys to the south and west.  These murkier conditions slowly advanced northwards, with the accompanying Stratus showing signs of wave activity and a couple of flights investigating the possibility of lift from a bank of cloud that formed to the NE of the site.  George Rowden flying one of the 5 First Flight pupils of the day in the DG500, found no sign of lift in  the clear air just in front of the cloud but Polly Whitehead and Jim McLean, flying K21 JVZ, found some weak lift inside it, which extended their flight time to 27 minutes.  This turned out to be the 3rd longest flight of the day, Nigel Burke having 28 minutes in the DG303 and George Rowden 34 minutes in the DG500, the result of a Mile High flight with Liz Tindale, Liz's husband Ian and daughter Alesia also having First Flights.  The Falke was slso busy with 4 flights and in addition to club aircraft activity, Derek Taylor took a launch in Duo Discus KSM in order to do a engine test, which was successfully accomplished, and the Super Cub departed for a 2 hour flight to its new  home at Nymsfield, so below is a photo for old times sake. 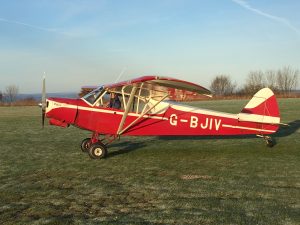