Sunday 9th.  A sunny day enabled flying to commence around 1030 hrs off runway 24, as a light to moderate NW'ly blew  and a number of students from Durham University GC took advantage of the conditions to fly.  The wind veered more into the N around midday, so after 4 ATs off runway 24, operations relocated to runway 02 and a further 4 ATs were flown from there.  The change in conditions appeared to bring some limited soaring opportunities with Mike Collins having 37 minutes solo in K21 JVZ and Chris Booker and Toby Wilson having the same time in the DG500, although they  had the advantage of a higher tow.  All the day's other flights were circuits with Pawnee FEV on tugging duties.

Monday 10th.  Another sunny if cold day, as a light to moderate NW'ly continued to blow, take offs being from runway 24 and landings on 24, 30 and even 20.  The absence of any useable lift meant a day of circuits, although Tony Drury and new member Elesia Tindale managed the longest flight of the day, 30 minutes off a 3000' tow in the DG500.  As well as allowing 4 First Flight pupils to experience gliding, the day saw Astir HVK well patronised with Phil Turner and Andy Tyas each having 2 flights and Alan Beaumont having 1, contributing to the day's total of 15 launches.

Tuesday 11th.  The wind was now a light to moderate E'ly and with fog in the surronding valleys and very poor visibilty generally, the start of flying was delayed until after lunch with subsequently only 3 launches off runway 20, 2 of which were for First Flight pupils, flying coming to an end around 1440 hrs..  A generally leaden sky did allow launches to 3,000' but even with this start, the best duration of the day was only 22 minutes, while Stuart Heaton, taking the only member launch of the day, solo in K21 JVZ, had 18 minutes off a 2000' tow.

Wednesday 12th.   A lack of custom delayed the start of flying until 1115 hrs, when John Tayler took the only First Flight pupil of the day, Sharon Muir, for a 26 minute flight in K21 JVZ.  He was followed by George Rowden flying JVZ solo, with pilots reporting lumpy conditions below 1,000' QFE and smooth conditions above.  There was even some limited areas of zero of the corner of the hill to the east of the White Horse to provide some added interest, not that it led to any significant increase in flight times.  The moderate ESE'ly provided some good cross wind landing practice on runway 20 while the morning's stratocumulus overcast at just over 4,000' asl subsequently broke up to give a sunny afternoon. 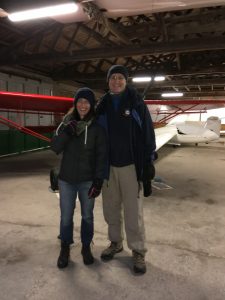