Friday 21st.  An occluded front over the middle of the UK brought 6mm of morning rain to site, the wind being a light NW'ly.  A brighter afternoon followed as the wind backed into the S while remaining light, but persistent orographic cloud prevented any flying.

Saturday 22nd.  A light to moderate WSW'ly brought bright and occasionally sunny skies but, more importantly, some good soaring conditions comprising hill and wave lift.  The 23 launches of the day included 21 via AT and 2 via the winch, all off runway 24, the conditions resulting in 6 flights of an hour or more and a further 9 over 30 minutes.  Some useful wave climbs were enjoyed with Bill Payton getting to 15,000' asl in  the DG303, Colin Troise and Marian Stanley getting to 7,300' asl in the DG1000, Ron Beezer 6,800' asl in the Discus and Tim Stanley 7,300' asl flying K21 JVZ solo.  Colin and Marian's 1:27 flight was the longest of the day, closely followed by Ron's 1:23 and Darren Lodge's 1:21 in the DG303, while others to break the 1 hour included Tony Drury in the DG303, Roger Burghall in Astir DPO off the winch and Ron Beezer and Jerry Henderson Newton in the DG1000.  The conditions allowed some pilots to venture away from the site, although not too far, with Northallerton, Boroughbridge and Helmsley being visited.  Lee Grinrod, sharing a 58 minute flight with  Peter Goodchild in the DG500, has provided the following photo of the day. 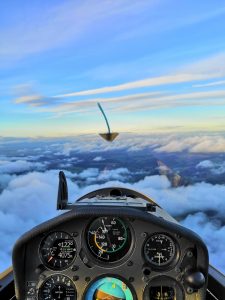 Sunday 23rd.   Another slow moving cold front brought a day of low cloud and rain to Sutton, 8.0 mm falling.  Most of the rain fell in the morning, with a change in wind direction from a light SE'ly to a light W'ly around 1300 hrs signalling the passage of the front.  However, the low cloud persisted so it was a no flying day.

Monday 24th.  High pressure had moved in overnight with the result a sparkling, sunny day, the wind being light and variable, but mainly from the southern quadrant.  Operations were off runway 20, but a lack of any lift meant it was a circuit day with launch height being the determinant of flight time.  17 ATs were flown, shared out 8 in K21 JVZ, 5 in the Ka8 and 4 in the DG303.  2 of the 2 seater flights were by Toby Wilson for First Flight pupils but the remaining 15 flights were distributed around only 4 pilots, Mike Collins  having 3 in the Ka8 and Duncan Pask 2, while Mark Newburn had all four in the DG303 and A Wallace had 3 in  JVZ in the company of John Carter. The quiescent nature of the day was illustrated by the flight time statistics, the longest being 25 minutes off Mark Newburn's  second flight in the DG303, the result of a 4,000' QFE tow.

Tuesday 25th.  Christmas Day is a non-flying day at Sutton due to the terms under which the site was originally acquired from the Church Commisioners back in the 1930's.

Wednesday 26th. High pressure over the UK initially provided a light to moderate SSE'ly flow but this progressively veered to become W'ly by the end of the day.  The high was associated with a lot of cloud, although this broke up at times to give sunny intervals, but a lack of demand was the major reason for it being a non-flying day.

Thursday 27th. The, by now, dominant high pressure, with its light winds and initially clear overnight skies,  had resulted in a foggy start to the day and the danger of fog/low cloud enveloping the site delayed the start of flying until early afternoon, although a lack of demand was also a factor.  However, Ron Beezer and Katherine Geretsen flew a shared flight in K21 JVZ that took off from runway 24 in the early afternoon, the wind being a light WSW'ly.  After weaving around through broken cloud layers behind Tuggie Les Rayment in Pawnee EV, Katherine landed Ron back on runway 20 after 16 minutes, her very first landing, after having found that visibility into sun was very poor.  Any further flying action was forestalled by the rapid misting of the canopies even when open, so that was the end of flying for the day.  Although short on flying action, the pre-flying day saw Stuart Heaton and Peter Clay fit a flashing beacon to one  of the tractors and Ron and Katherine plus Julian Geretsen busy themselves making a video for the current ground training programme.

Friday 28th.  After a sunny morning, more cloud developed after lunch but of an extent and base that did not affect flying, the wind being light and variable but predominately  from a SW'ly quadrant.  In spite of the light winds at ground level, wave was present and its resultant lift meant that 5 of the  day's 6 ATs off runway 24 lasted more than 30 minutes, with 2 of these being over an hour.  Duncan Pask flying the DG303 had the longest of  the day, 1:49, and climbed to around 5,400' asl, while John Carter and Mark Newburn in the DG1000 climbed to 7,500' asl off a tow to 5,000' QFE in their flight of 1:12.  This enabled them to visit Dishforth as the following photo shows, other shots providing a bird's eye view of Sutton and a very nice Glory. 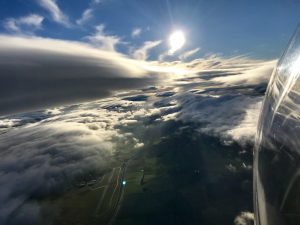 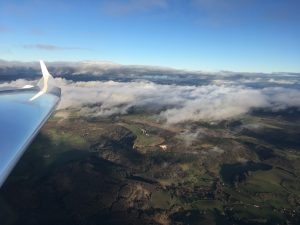 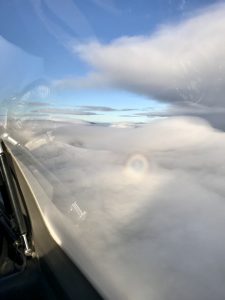 Saturday 29th.  A small low pressure centre running across the north of Scotland provided some overnight rain but this had quickly cleared to the east leaving the site in a fresh W'ly with gusts into the mid 30kts,  although the wind steadily moderated as it veered into the NW over the course of the day.  11 winch launches were flown off runway 24, a combination of hill and some weak wave lift enabling all but one of the day's flights to exceed 30 minutes, the exception being the only First Flight of the day.  Bill Payton, flying the DG303, had the longest flight of the day, 2:25, and reached 3,000' asl but was unable to progress  vertically beyond that.  Steve Thompson and Lee Grinrod flying K21 JVZ off the second flight of the day, also reached this altitude during a flight time of 50 minutes and found the wind speed to be 55 kts, which meant going backwards was readily achieved.  The others to reach or  exceed an hour were Les Rayment and Conrad Thwaites with 1:54 in the DG1000, and Chris Booker in the DG303 who had exactly an hour off the last launch of the day.  Chris had earlier had 57 minutes in the company of Jon May in JVZ.  Pilots reported turbulent conditions at times and variable hill lift, with nobody venturing further than the forward ridge or Boltby.  A visiting pilot in a Robin nicely demonstrated the turbulent conditions on the approach to runway 24 before refuelling and then demonstrating the turbulent conditions off the end of runway 24 on take off.