Wednesday 14th.  The light to moderate wind had reverted to an ESE'ly direction, accompanied by extensive cloud, the relatively low base delaying the start of flying until just before midday.  Thereafter, the uninspiring conditions didn't tempt too many members to fly so the majority of the day's 9 ATs were for  5 First Flights, the cloud base restricting initial launch heights to around 1500' QFE, meaning that Sarah Morris, the first of the day's First Flight pupils had 2 flights, both of 15 minutes duration.  The cloud base gradually rose, so that later flights were able to take higher tows resulting in longer flight times in the 27-32 minute range.  Colin Troise, taking one of the day's 3 solo flights, had the day's longest flight in the DG303, 35 minutes, the result of finding some transient wave lift that enabled him  to initially climb 800'.

Thursday 15th.  Foggy conditions in the Vales of York and Pickering gradually cleared to a sunny day, but the site was plagued by persistent Stratus forming on the southern ridge in the light to moderate ESE'ly, this gradually becoming E'ly.  Consequently, there was no flying.

Friday 16th.  A decaying front brought very murky conditions to North Yorkshire, this persisting all day as a light to moderate SE'ly  became E'ly around midday.  With the site in cloud for most of the day it was again a no-flying day.

Saturday 17th.  The murky conditions of Friday were present at the start of Saturday, but drier air from the continent brought in on a light to moderate E'ly resulted in the break-up of the extensive cloud, allowing flying to commence around 1330 hrs.  5 ATs were subsequently flown, mainly in K21 JVZ, but in the absence of any significant lift, flight times were in the range 12-15 minutes.  Jon May and Colin Troise, sharing a flight in the DG1000, did find some short lived, weak wave that enabled them to climb 200' and extend their flight time to 20 minutes.  Falke pilots also took advantage of the improved conditions to post 2 flights and the sunset provided a colourful end to the day. 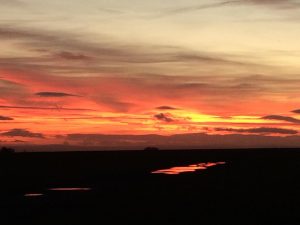 The post flying day concluded with a meal and the installation of the Dishforth Bell at the YGC, an  object and tradition that had been an important part of the RAFGSA operations at RAF Dishforth before its closure.  A photo of the Bell is shown below. 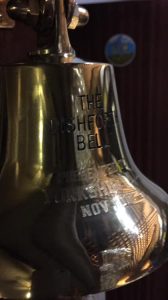 The Bell is rung to publicize a memorable flight, the pilot then buying members a drink at the bar or alternatively donating to a charity.  Saturday's event was well attended, with the Bell and its tradition warmly and wetly welcomed into the YGC, the Yorkshire Air Ambulance charity benefiting from the generosity of members to the tune of £180.

Sunday 18th.  A day of clear blue, sunny skies meant a full day's flying with 19 AT take offs angled off runway 02 to minimize the cross wind component provided by the light to moderate ENE'ly. Single seater pilots Jim McLean and Paul Whitehead each flying the DG303 and Mike Collins with two flights in Astir HVK demonstrated the difficulty in staying up with flight times in the range 10-17 minutes, the two seaters doing a little better with a flight time range of 11 -25 minutes, the influence of a high tow being emphasized by the 33 minute flight time of Tony Drury and his Mile High pupil Arthur Scantleberry in the DG500, one of the day's 7 First Flight pupils.  This total should have been 8, but the last flight of the day saw Toby Wilson and Lucy Scantleberry abort their launch due to canopy misting.  By far the day's longest flight saw Duncan Pask being encouraged to take off in his LS10 to investigate a potential hydraulic jump down wind of Osmotherly that was marked by a low level cloud.  Duncan returned afer 1:13, with his OGN flight trace indicating he had indeed utilised this type of lift although as they say on the major news channels there is currently no independent confirmation of this.

Monday 19th.  The feed from the east continued under the influence of a blocking high over Scandinavia, the light to moderate ENE'ly wind bringing in frequent showers, this, and the low cloud base, preventing any flying.