Tuesday 30th.  A light to moderate NNW'ly that slowly backed into the NW brought in cloudy skies and frequent showers, particularly after lunch.  The combination of low cloud, a moderate NW'ly and showers meant it was a non flying day.

Wednesday 31st.  A light ESE'ly and sunny skies greeted the day, the wind increasing to moderate and showing a tendency to veer into the SE during the day and be accompanied by an occasional shower as some weak convection developed.  20 ATs were flown off runway 20 with some weak wave between Site and Coxwold providing some soaring opportunities.  These were best utilized by Sue Aherne, who, flying the Discus, had 1:16 by dint of careful flying and magic incantations, this being Halloween, the only pilot to exceed an hour aloft.  6 other pilots managed flight times in excess of 30 minutes, including Mark Newburn in Astir DPO with 47 minutes, Mike Greenacre with 36 minutes in Astir HLK and  Tony Drury and his Mile High pupil, David Davey with 40 minutes.   The day's flying also included 2 flights in the Falke.

Thursday 1st November.  A depression moving up the North Sea had brought overnight cloud and some light rain, but this  cleared the site by early morning, a backlog of low cloud delaying the start of flying until just before lunch.  Thereafter, 11 AT's were flown off runway 24 into a light to moderate NW'ly, this varying between WNW  and W.  Only two of the day's flights exceeded 30 minutes with  one of these exceeding an hour.  Rob Bailey in his ASG29 was the pilot to exceed an  hour with 1:50, during which he visited the Tontine but had to resort to his engine to get back to site but then had  a restart and  with the help of an isolated cloud south of the site visited a few local TPs to cover 67 km.  Rob's photo below while enroute to the Tontine, gives a good impression of a sunny and crisp November day.  The aforementioned 30+ minute flight was enjoyed by Paul Whitehead and First Flight pupil Gordon Whittaker with 36 minutes in the DG500. 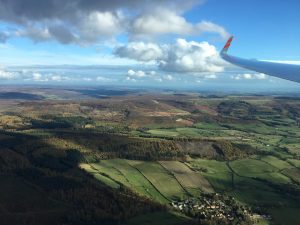 Friday 2nd.  Friday dawned sunny and clear and with an unstable air mass that produced some weak convection, but strong enough to tempt some pilots into cross countries.  The wind remained light all day, mainly from the  N, so the day's 35 ATs were flown off runway 02.  Rob Bailey in his ASG 29 again topped the endurance stakes with 2:37 as he completed a 87 km Sut3/Castle Howard/Sutton/Northallerton/Sutton task around  while visitor Chris Gill and his P2, Mr Morris, had 1:37 in Chris' DG1001, a trip out towards Scarborough using atmospheric energy although the trip home required some fossil fuel energy.  Another of the 4 pilots to have a flight time of > 1 hour was Duncan Pask with 1:10 in his LS10.  The club single seater fleet was well used with the Discus, the DG303 and both Astirs flown, visitor A Walby having 37 minutes in Astir DPO, Nigel Burke 36  minutes in the DG303 and Phil Lazenby 30 minutes in Astir HVK.  The two seaters were also busy as the early arrivals for a Junior's weekend set about having check flights.  The day was brought to a successful end when Adam Sayer went solo, as shown in the photo below, so congratulations Adam although I am not sure who is the happier, Adam or instructor Ron Beezer. 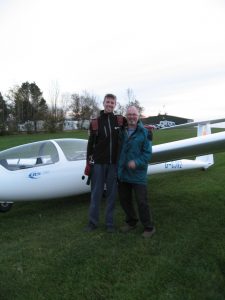