Saturday 24th.  The overall synoptic situation had not changed much so it was another day of light to  moderate winds although now from a NNE'ly direction, this slowly changing to become N'ly over the course of the day.  Cloud base was again a limiting factor for the morning, restricting launch heights but not stopping flying altogether, so 22 ATs were flown off runway 02, the take off point being put towards the west side of the runway.   It was eventually possible to launch to 3,000' QFE, mainly for the 4 First Flight pupils of the day, and as there was no opportunity for any soaring these flights generated the longest flight times, with the Simpsons (M and P) having the company of Tony Drury in K21 JVZ for 24 and 25 minutes respectively.  A maximum temperature of 6.7C and a significant wind chill meant that the launch cabin was in demand as a warming spot, that is until Toby Wilson decided that it was far too crowded and persuaded all the other occupants to leave as the following photo shows. 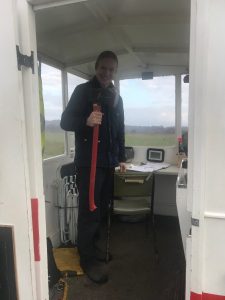 Sunday 25th.  A general repeat of Saturday's weather was  the order of the day, the light to moderate NNE'ly again blowing and bringing in low cloud, but this time with a few showers generated in a trough line along coast.  Operations were again from the west side of runway 02 but the combination of showers and their associated low cloud limiting launch heights at times and the number of launches, 9 being the day's total.  As with Saturday, the day's 3 First Flight pupils did manage launches to 3,000' QFE and in the absence of any lift,  generated the longest flights, 33, 21 and 20 minutes, all in K21 JVZ and all in the company of instructor Andy Hatfield.

Monday 26th.  Little change in the synoptic situation meant it was again a day of operations starting from the west side of runway 02, into a light N to NNE'ly wind.  However, the persistent trough line along the coast to the east of the site became more active and the day was affected by more frequent showers, these limiting the day's launch total to 3, all in K21 JVZ, and all with John Carter as P1.  Martin Clowes and Ann Crick flew two of the flights with John, the other, and longest flight of the day, being for McEwan, the only First Flight pupil  to fly, her flight with John lasting for 27 minutes and enjoying very smooth conditions.

Tuesday 27th.  A vigorous Atlantic depression in the SW approaches led to a steadily increasing E to ESE'ly wind at site, foggy/misty conditions in the Vale of York and early morning hazy sunshine at site  giving way to increasing cloud and rain, the latter commencing around 1600 hrs. The strength of the wind, initially moderate and increasing to moderate to fresh, coupled with its direction, led to a decision to keep the gliders in the hangar, so members efforts were directed at rigging the DG1000, it having been returned to site by Graham Evison after being away for a canopy repair.  Work on the big red tractor also resulted in it being declared site, if not exactly, road worthy.