Friday 9th.  The cloudy and damp ESE'ly flow, which was moderate to fresh at times.  continued to plague the site with cloud, low enough at times to shroud the hill and always low enough to prevent any flying.

Saturday 10th.  The wind had declined to become a light to moderate SE'ly which slowly backed into the E over the course of the day as a sunny start got flying under way around 1045 hrs.  It was a circuit day, with the majority of the day's 9 ATs off runway 20 going to 1000' QFE, as members honed their circuit and landing skills.  Consequently, flight times were low, with only Darren Lodge, flying the DG500 solo, Les Rayment and his First Flight pupil, also flying the DG500 and Jamie Quartermaine and member Archie Hoskins in K21 JVZ having flight times of over  15 minutes.  In addition to the above flying, the Falke had 2 flights.

Sunday 11th.  Rain until around 1300 hrs delayed flying until just after 1500 hrs although virtual flying on the simulator was a feature of the morning's activities.  The passage of the rain lead to a wind shift from ESE'ly to SW'ly and operations off runway 24, with the majority of the subsequent landings on  runway 20.  By the time flying came to a halt around 1615 hrs, 5 ATs had been flown, with the hill providing sufficient lift to enable 3 of the day's flights to exceed 30 minutes, although non exceeded an hour.  Martyn Johnson and Amy Harper in the DG500 set the ball rolling with a 40 minute flight from the day's first launch, a flight time that was never exceeded, although the second flight of the day by Brian Wise and Paul Frost in K21 JVZ came closest with 37 minutes.  The 30 minute barrier was also reached by Nora van G in the Discus, but only just.

Monday 12th.  Stratus forming on the hill in the light to moderate SE'ly led to a delay to the start of flying, this getting underway just before midday when Tony Drury took  the first of the day's 5 First Flight pupils for a 40 minute flight in K21 JVZ.  The winds at flying height were SW'ly and this gave rise to some wave activity, the two private owners who flew on the day making the most of the conditions, Steve Thompson climbing to 7.400 ' during his 2:00 flight in his Discus and John Ellis getting to 4,700 ' in his DG800, his flight time being 1:40.  Mike Greenacre was the only other pilot to breach the 1 hr barrier with 1:02 in Astir HVK, but all the other flights bar one from the 11 ATs flown on the day exceeded 30 minutes, with the average flight time for the day's First Flight pupils being 36 minutes.  Phil Turner, flying HVK almost joined the > 1 hr group but headed the > 30 minute group with 58 minutes.  The day was showery in nature but most of these missed the site, although one to the north did provide a nice primary with  an accompanying secondary rainbow and Alexander's dark band, as the following photo, taken at the end of flying by John Carter, shows. 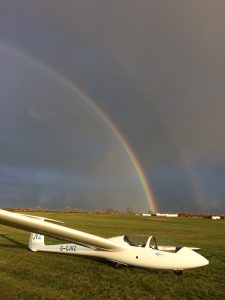 Tuesday 13th.  An  squeeze in the isobars between a low pressure centered to the west of  the UK and a high extending from Siberia resulted in a moderate to fresh SW'ly at site, this generating some good wave conditions at times, although the wave proved to be somewhat fickle while neverthless enhancing the hill lift.  As a consequence, all the day's 19 launches, 8 by AT and 11 via the winch, exceeded 30 minutes, and some good wave based climbs and a cross country were flown. Visitor Tim Milner in his LS3 made the most of the day off  his AT, flying a 256 km task with TPs at Haydon Bridge and Grimworth Reservoir, and climbing to just under 15,000' asl in his flight of 3:39.  Taking a winch launch just before lunch appeared in retrospect to be the best way of contacting the wave, with Conrad Thwaits in the Discus, take off time 1116 hrs, getting to 11,000' asl, John Ellis, self launching in his DG800 at 1136 hrs,  climbing to 11,200' asl, and Roger Burghall in his ASW20, launching at 1159 hrs and getting to 8,700' asl. The wave was not very well marked by cloud as  this photo from Roger shows but most contacted just to the west of the hill. 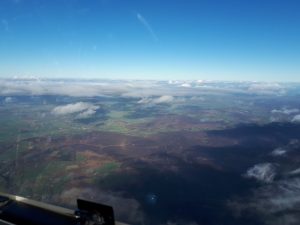 None of the other winch based flights lead to any appreciable wave climbs, while from AT, Tim Milner's wave based flight and climb was somewhat replicated by Les Rayment who took Mr Chaplin, one of the day's 2 First Flight pupils, to 7,800' asl in the DG500 and Tony Drury, who took Day Course pupil Stephen Lightfoot for 2 flights in the DG500, the second of which saw them climb to 7.200 'asl.   In all, 8 of the day's  19 launches led to flights in excess of an hour, with the balance exceeding 30 minutes.  Dave Campbell had 2:16 in Astir DPO from the first winch launch of the day, with Colin Troise and Nigel Burke having 1:45 in the DG1000 and Phil Lazenby 1:30 in DPO.