Tuesday 9th.  In spite of the surface wind being a moderate to fresh S'ly, it was another wave soaring day at Sutton as the following photo shows even though contacting the wave was  not entirely straightforward.. 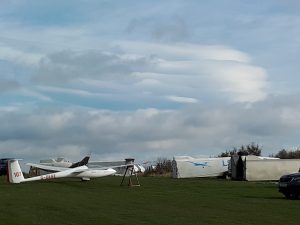 However, the 22 ATs off runway 20 generated 20 flights of over 30  minutes, with 13 over an hour as well as 2 significant cross countries and 5 flights to around 10,000' asl or more.  The first cross country was flown by visitor Tim Milner in his LS3, fulfilling a long held ambition to cross the Pennines and visit the Lake District, which he did with an O/R to Bassenthwaite, a distance of 274 km, climbing to a peak height of around 14,000' asl in the process.  Tim reported well marked wave in the Eden Valley, as illustrated by the following photo, but essentially blue wave conditions on his return to Sutton after a flight of just over 5 hrs. 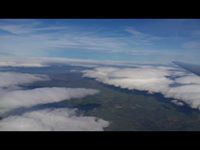 The wave was also used by Albert Newbery and Bill Payton to take their DG1000t to Carlise and back, a distance of 262 km, negotiating a low point over the Pennines and route and some very strong sink at times on the way back through the blue conditions.  Other pilots, who concetrated on getting a good climb, included Martyn Johnson in his DG600 with a climb to 11,600' asl, visitors B Grace and A Odom in their DG505 with a climb to just over 12,000' asl, Tor Taverner to 9,600' asl in his ASW 20 and John Carter and Lee Grindrod with a climb to 10,400' asl in the DG1000.  The latter 3 flights all took off after 1520 hrs when haze rather than cloud marked the wave, as the following photo by John illustrates, with the last flights to land doing so around 1815 hrs, these landings preceding a splendid sunset as a photo by Lee shows. 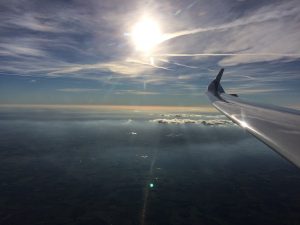 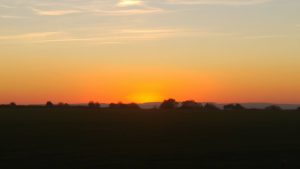 Wednesday 10th.   A moderate SE'ly blew for most of the day, tending to back into the E as the day's flying came to an end.  Operations off ruway 20  had to contend with cross wind take offs and landings and some turbulent conditions on the approach, while aloft a distinct inversion at 3,000' asl marked the boundary between crystal clear air above and murky conditions below.  The latter deteriorated to such an extent that the last of the 6 First Flights of the day was cancelled.   A lack of any useable lift, apart from brief periods of zero, meant that flight times were principally determined by launch height, with only John Carter's Mile High flight with Christopher Jaume in the DG1000 exceeding 30 minutes and launches to 3,000' QFE managing 22-25 minutes.  With a strong wind at flying height and poor horizontal visibility, keeping the airfield in view was a major consideration for all pilots but the  haze did  contribute to a good photo as the DG1000, with John Carter as wing man, made its way back to the hangar at the end of the day. 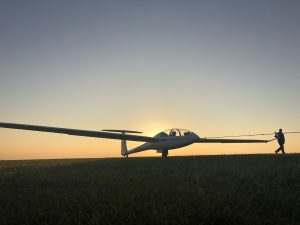