Tuesday 23rd.  The large anticyclone remained to the west of the UK, and the flow of WSW'ly winds continued, these being moderate with gusts into the high 20 kts.  It was therefore a winching day off runway 24 with one private owner launch and 5 others in  club 2 seaters. Apart from hill soaring, there was some weak wave present, allowing Jesper Mjels in his DG400 to visit Masham, Northallerton and the Tontine in his flight of 4:45, although he never climbed much above 4,000' asl.  While Jesper was on a relatively low level exploration of the local TPs, Bill Payton and Conrad Thwaites indulged themselves in an even lower exploration of the fields to the west of the forward ridge, eventually landing in one near Cowesby after a flight of just over an hour.  The resulting retrieve required quite a lot of muscle power as the following photos show, with rumours of a training camp for would be bungy launch crews being just another example of fake news. 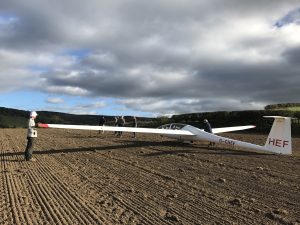 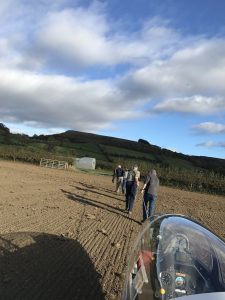 Jesper's and Bill/Conrad's flights were the only 2 to exceed an hour, but David Campbell and John Carter came very close with 59 minutes in K21 JVZ and off the last flight of the day, Colin Troise had 47 solo minutes in the same glider.

Wednesday 24th.  Apart from a reduction in the strength of the wind, now a light to  moderate WSW'ly, the weather was similar to the previous days as the Atlantic high continued to dominate the UK's weather.  ATing was the order of the day off runway 24 with 14 launches,  but staying up proved to be somewhat problematical as the hill was not working very well and wave lift was transient and weak, limiting climbs to betweeen 4-4,500'asl.  John Carter and Roy Wilkins appeared to be able to make the best out of the day, with two flights in K21 JVZ, both of which resulted in climbs to around 4,500' asl with a combined flight time of just over an hour.   The only flight to make it to an hour, and that exactly, saw Tony Drury and  his Mile High pupil acheive that in the DG500, while Tony and another of the day's 6 First Flight pupils, again in the DG500, had 40 minutes.  Kevin and Liz Kiely, flying in JVZ did not achieve a flight time in excess of 30 minutes but did record a climb to around 4,000' asl.  The day may have been unspectacular from a flying perspective, but ended with a spectacular sunset, as the following photo from John Carter shows. 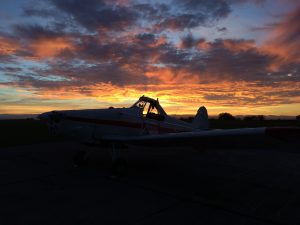 Thursday 25th.   Another day of a light to moderate WSW'ly as the high continued to dominate, led to a further session of ATs off runway 24, 12 in all.  A wavy looking sky tempted 3 private owners to rig and launch, with variable results.  Tim Pearson failed to find any lift in his DG100 and landed after 20 minutes, while John Ellis in his DG800 found lots of weak wave lift that kept him aloft for just over 4 hours but limited his peak altitude to around 5,000' asl.  Jesper Mjels on  the other hand, eventually climbed to around 9,000' in his DG400 and visited Northallerton, Ripon and Wetherby in his flight of just over 5 hours.  A slowly approaching cold front tended to increase the cloud as the day progressed, the base also lowering to around 1,500' QFE, so closing slots led to some truncated flights.  Apart from Jesper and John's flights, another 2 exceeded an hour with Derek Smith and M Lench having 1:05 in the DG1000 and George Rowden taking Steve Berry, a returning First Flight pupil and ex hang glider pilot, for 1:04 in the DG500, George and Steve finding some consistent weak wave over Cowesby enabling them to climb to 4,600' asl.    Andy Parish and Brian Brock, flying K21 JVZ, had the first and last flights of the day, which added together gave them 1:34 minutes flying time, the last flight also enabling them to climb to just over 4,000' before increasing cloud led to them returning to site.