Tuesday 16th.  A  light to moderate SE'ly that slowly veered into the S was accompanied by a low overcast that prevented any flying.

Wednesday 17th.  The early, light to moderate, WSW'ly slowly declined to become light and variable by the end of the day, the morning cloud cover slowly dispersing to leave a clear afternoon and evening.  30 ATs were flown off runway 24, with the majority of landings on 20 , but a lack of useable lift meant that only 5 flights exceeded 30 minutes and none an hour.  Visitor Roger Emms in his LAK17 had the second longest flight of the day, 38 minutes, closely followed by Duncan Pask with 37 minutes in the Ka8, while Graham Taylor had 36 minutes, aided by an high tow as the club single seater fleet was well patronised.  The longest flight of the day was however by John Carter and Steven Bury who had 41 minutes in the DG1000.

Thursday 18th.  A ridge of high pressure provided a late thermic day with Cu blossoming over the North Yorkshire Moors and Yorkshire Wolds, albeit with a relatively low cloudbase of 3-3,500' asl.  A light N'ly meant operations of runway 02 and 28 ATs were flown, yielding a couple of cross countries, 7 flights of over an hour and a further 10 over 30 minutes.  Rob Bailey and John Ellis were the cross country pilots, with Rob flying 137 km in his ASG29 as he visited Goole, Pocklington and Thirsk, while John included the Tontine, Pickering and Thirsk in his TP list as he flew 111 km in his DG800, the flight inlcuding a straight glide under a cloud street from Pickering back to Sutton.  Thermal strengths were generally 1-2 kts with the occasional 3 kt'er.  Both Rob and John were aloft around 3 hours as was David Campbell in Astir HVK, while visitor David Mansfield had 2:10 in his DG300.  Andy Parish and Andrew Bedford joined the > 1 hr list with 1:02 in the DG500 with Steve Thompson  and Ken Duxbury just missing out with a nevertheless  enjoyable 58 minutes in the DG1000.  The day also saw Paul Bulmer convert to the Astir, so congratulations Paul.

Friday 19th.  The continuing high pressure situation resulted in an initial, light to moderate SSE'ly and sunny skies, the wind slowly veering to become W'ly by the end of the flying day.   18 ATs resulted, with 3 by private owners, one of whom, visitor Roger Emms, managed to find some weak wave and climb to around 5,600' asl in his LAK 17.  Roger was one of 5 flights to achieve wave climbs, Nora v G getting to 5,200' in the DG303, Andy Parish and guest Tom Wallace 6,000' in K21 JVZ and Andy again, this time with Joan Wilson, getting to 4,800' in JVZ off the last flight of the day. (All altitudes asl).  The best climb of the day saw John Ellis in his DG800 take a high self launch and eventually reach 11,300' visiting Harrogate North, Pateley Bridge, Leyburn and Northallerton in the process.  John reported the wave to be rough at all altitudes, with some very uncomfortable bumps at times.   John's 3:06 hr flight was the longest ot the day, with visitors Roger Emms and David Mansfield in his DG300 getting just over an hour each. Nora v G, with 50 minutes in the DG303  topped the > 30 minute list, this also including Andy Parish and guest Tom Wallace who had 46 minutes in K21 JVZ.  A photo by Nora of the wave is shown below. 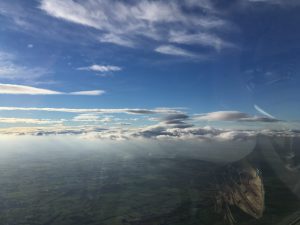 Saturday 20th.  The high pressure remained in charge so it was another sunny day, the wind being a light to moderate S'ly to start before veering to become WSW'ly.  This change resulted in both a runway change, from 20 to 24 in the early afternoon, but also provided hill soaring opportunities and some weak wave, the latter being utilised by Martyn Johnson in his DG600 who climbed to around 5,600' asl in his flight of 2:18, as he and some other private owners explored to the north over the Moors.  All the 6 flights to exceed an hour had afternoon take offs, as did the majority of a further 4 flights which exceeded 30 minutes.  As well as Martyn, 2 other private owners flew, Toby Wilson having exactly an hour in his Standard Cirrus and Chris Booker having 1:03 in his LS1.  Those flying club aircraft also took advantage of the day's soaring opportunities with Phil Turner having 1:42 in Astir HVK, Steve Ogden having 1:03 in the DG303, Andy Parish and Joan Wilson having the same time in the DG1000 and Tony Drury and Joe Goldine having 1:02 in the DG500.  The day's 29 launches were complemented by 2 flights in the Falke.  As well as being busy with 6 First Flight pupils, the 2 seaters also hosted members of the Durham University Gliding Club.

Sunday 21st.  A weakening cold front moving southeastwards brought low cloud but no rain to site, the extensive cloud with its low base delaying the start of flying until late morning, the wind being a light to moderate SSW'ly, although this veered into the WSW later and eventually became a light NW'ly as skies cleared late afternoon with the passage of the front.  At best, the cloud base for most of the day was around 400' QFE but sunny slots could be seen on the ground to the west over the Vale of York and it was decided that flying should be restricted to experienced pilots.  4 of these subsequently launched and contacted the pre-frontal wave, all climbing to over 10,000' asl.   Jesper Mjels in his DG400 climbed to 15,900', John Ellis in his DG800 to 12,600', Steve Thompson in his Discus to 12,200' and Martyn Johnson in his DG600 to 11,900'.  After some 3 hours of wave soaring, the advancing cold front resulted in all the wave slots in the vicinity of site closing, with the majority of the above pilots making descents through the cloud enroute to their return to site.  The lack of any other flying, except for 2 sorties in the Falke, meant that the simulator was used to introduce gliding to some other members of the Durham University Gliding Club.  Tony Drury provided this photo of a Glory and Brocken Spetre on a local wave cloud. 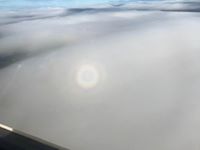 Monday 22nd.   Sunny skies and a light WNW'ly greeted those assembling for the morning briefing and flying commenced around 1030 hrs with the AT of Brian Wise and Sean Kelly off runway 24 in K21 JVZ.  Tony Drury, taking the first of the 6 First Flight pupils of the day in  the DG500, reported some weak wave over Sutton village as he extended his flight time to 33 minutes.  However, none of following morning flights found any significant lift in spite of some signs of thermal activity.  Around 1300 hrs the wind backed into the WSW and increased to moderate, providing some temperamental hill soaring which was chiefly utilised by Martyn Johnson as he flew his DG600 for over 2 hours.  Meanwhile, his syndicate partner, Colin Troise, flying the DG1000 solo, found some wave over Cowesby Bowl and climbed to just over 5,000' asl, being joined there by John Shaw in his LS10 who eventually climbed to 5,900' asl. The wave really became established from around 1500 hrs, with virtually all the subsequent flights contacting and climbing to between 6-7,500' asl, with Nora v G getting to 7,500'  in the DG303 after having called down Conrad Thwaites after he had had 1:19 in the DG303.   Others to enjoy the late afternoon wave flying included Colin Troise who, flying his DG600 this time, climbed to 6,700', George Rowden who took his First Flight pupil to 6,500' and Tony Drury who took his First Flight pupil to 6,900'.  Tony later discovered his pupil had purchased a Mile High flight so  he was very pleased to have honoured the purchase. In all the day provided 8 flights of over an hour with a further 7 over 30 minutes and the magic of the late afternoon's flying was captured by John Carter as he and Keith Davey climbed to 7,000' asl in the DG1000 in their flight of 56 minutes. 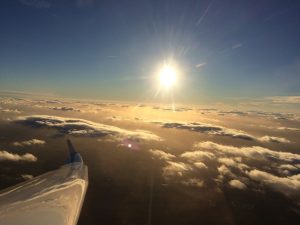 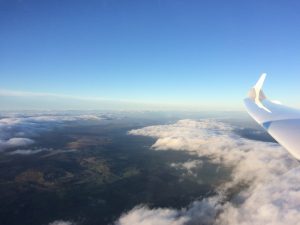 Why not give glidng a go? We offer first flights for those who want to see first hand why we love what we do - and full memberships for those who have been bitten by the bug!