Sunday 30th.  A day of sunny intervals  with a light to moderate WSW'ly blowing, saw 23 ATs and some moderate soaring conditions, 12 flights exceeding 30 minutes of which 5 exceeded an hour.  Jesper Mjels in his DG400 had the longest flight of the day, 3:12, during he visited Northallerton and Masham, while visitor Steve Codd had 1:20 in his ASW18 and Nora v G, solo in the Discus, Andy Hatfield in his Pik 20 and Chris Booker, sharing a flight with Toby Wilson in the DG500, all had between 1:08 and 1:12.  The last named flight was a bit of a busman's holiday for Toby as he earlier had flown 5 of the 6 First Flight pupils of the day.  The undoubted highlight of the day was however the re-solo of Jerry Henderson-Newton, a photo of him and instructor Ron Beezer being shown below.  Well done Jerry.  Daily reports on the activities and achievements of the YGC expedition to Millfield over the rest of this week, written by Colin Troise, can be found on the YGC Forum. 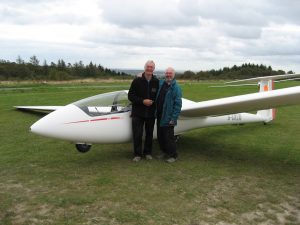 Monday 1st October.  A sunny start to the day led to the start of flying around 1000 hrs as a light  SW'ly blew, this tending to veer into the WSW later and increase in strength to light to moderate as cloud amounts also increased.  22 ATs were flown, initially off runway 20, but after 11 launches operations moved to runway 24.  4 private owners flew, visitors Steve Codd and Adrian Noble as well as members Rob Bailey and Tony Drury, with Rob and Tony providing 2 of the 3 flights that exceeded an hour on the day  with a further 5 exceeding 30 minutes.  Rob had 2:05 in his ASG29 and Tony 1:32 in his DG303.  Visitor Paul Crump  provided the other flight to exceed an hour with 1:08 in the club Discus.  Will Blackburn and Stan shared the flying of the 6 First Flight pupils, one of whom was a Mile High pupil who had 43 minutes in the DG500 with Will, visitor Adrian Noble in his DG300 having 42 minutes.

Tuesday 2nd.  A blustery WSW'ly wind gusting into the mid 30 kts meant there was no flying.

Wednesday 3rd.   A grey sheet of cloud greeted the day and provided some morning rain, the initially light to moderate SSW'ly   generating some soft hill soaring.  As the day progressed the wind veered into the WSW and the cloud opened up, providing a combination of hill and wave soaring that led to the day's 27 ATs generating 19 flights over 30 minutes.  The 8 private owners who flew provided 8 of the 11 flights to exceed an hour and 6 of those to register significant wave climbs, although the  late arrival of usable wave conditions restricted cross country ambitions, with no one getting further away from the site than Bedale.  Climbs to just over 12.000' asl were recorded by Steve Thompson in his Discus, Adrian Noble in his DG300, Paul Crump in the club Discus and Paul Cooper in the club Astir, while visitors Steve Codd in his ASW18 and Chris Jones in his Speed Astir climbed to between 9 thousand and 10 thousand feet asl, with some of Steve Codd's photos fromhis flight finding their way onto the BGA Facebook page.  Steve Thompson, Paul Crump and Adrian Noble were all aloft for over 4 hours, while Steve Codd also had a day's flight time of over 4 hours, but via two separate flights.  Andy Parish and Day Course member Mike had 1:42 in K21 JVZ via 2 flights, visitor Pete Whitehead 1:25 in his IS29, and Graham Taylor had 53 minutes in Astir DPO as the Falke contributed a single flight to add to the day's launch total.