Wednesday 12th.  A light to moderate WSW'ly blew all day as the cloudy trailing edge of a weak cold front cleared the site to the SE mid morning, the trailer park becoming busy as a number of private owners rigged in expectation of a thermal based cross country day.  However, of the 14 private owners  launches,  only Lindsay McLane in his Ventus completed a thermal based cross country, a 181 km task with TPs at the Tontine, Burn and Pickering.  The majority of private owners contacted wave so a number of wave based tasks were flown instead.  The post flight comments revealed that the wave, although relatively easy to contact from thermal, with most pilots finding their initial climb over Helperby, between Thirsk and Boroughbridge, was not marked by  classic wave clouds, the  irregularly spaced Cumulus giving little hint as to where the wave lift or sink was.  In addition, those pilots venturing over the Pennines to the west or northwest, found a lot more cloud and poorer wave conditions.  The longest wave based flight of the day saw Rob Bailey in his ASG29 cover 220 km after reaching around 16,000' asl,  his return from Barnard Castle finding little lift so that by the time he reached the Tontine he was below cloud base as his photo of Cod Beck reservoir shows. 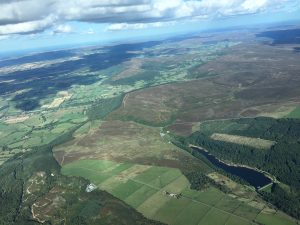 Jim Mclane in his ASW24 ventured as far west as Kettlewell before returning and visiting the Tontine, covering 120 km and reaching just over 12,000' asl, a similar flight being made by Jesper Mjels in his DG400. although he climbed to 17,700' asl, the highest of the day.   John Ellis in his DG800 took quite a long time to contact the wave but when he did climbed to 13,500' asl and then used the height to do an O/R to Burn, covering around 150 km.  George Rowden in his LS8-18, climbed to 13,000' asl just to the west of Ripon and visited a number of local TPs to cover 130 km, while Phil Lazenby flying the club Astir found an intial climb to 10,000' asl just to the south of the White Horse  and pushed upwind expecting to find further lift.  This failed to materialise until below cloud base near Ripon, with Phil using thermal to return to site only to climb back up into the wave in the same spot he started from, his flight covering another 130 km.   Phil's photo of the site from 9,000' asl is shown below. 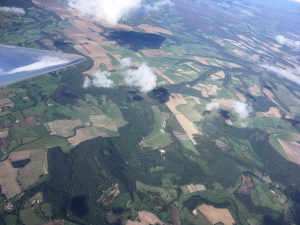 Another pilot to fly a club aircraft into the wave was Conrad Thwaites who used his climb to around 8,000' asl in the Discus to do an O/R to York.  The day's 38 ATs yielded 29 flights of over 30 minutes with 17 over an hour, John Ellis' 5:10 and |Jim McLean's 4:03 being the two longest of the day.  None of the day's 2 seater flights made it to over an hour, the longest seeing Stan and Ken Duxbury in K21 JVZ and Albert Newbery and K Springate in K21 KLW both having 46 minutes.  So with ridge, thermal and wave lift on tap, a good day was had by all.

Thursday 13th.  The wind had increased a little compared with Wednesday and had backed into the SW, although it later veered into the WSW, the day being characterised by cloudy skies, although cloud base was not a problem.   22 ATs were flown off runway 24, with 17 being over 30 minutes and 7 over an hour as hill lift and wave provided soaring opportunites.  The period around midday saw a number of pilots contact wave with Jesper Mjels in his DG400, Chris Teagle in his Kestrel, Stan and First Flight pupil Susan Tyler in the DG500 and Kevin and Liz Kiely in K21 JVZ all  getting climbs.  Jesper reached 12,000' , Chris 10,000', Stan and Susan 5,700' and the Kielys 6,200', all asl, as Jesper covered 110 km and Chris 160 km, more extensive cloud over the Pennines restricting their flights to TPs on the western edge of the Vale of York.  Jesper's flight time of 4:33 was the longest of the day, with Chris having 2:54, while Dave McKinney in his ASW28 had over 2 hours hill soaring.  Those flying club gliders for more than an hour inlcuded, Chris Knapp in  the DG303, 1:09, Andy Tyas in the Astir, 1:05, the aforementioned Kielys with 1:11 and Stan and Day Course member Stuart Robertson with 1:31 in the DG500.  Andy Parish and John Dore had two flights close to an hour, the first in K21 JVZ of 58 minutes and the second in  JVZ of 52 minutes.

Friday 14th.  Some light rain led to a cessation of flying late morning after the first flight of the day was hampered by a low cloudbase.  However,  the skies brightened after lunch before cloudier skies returned, the light to moderate  wind veering from an inital SSW direction to become WSW later, the hill providing lift.  4 of the 9 ATs of the day led to flights of over an hour, with Steve Thompson taking the newly acquired Astir, G-CHVK, for a test flight that lasted for just over an hour.   Martyn Johnson was the only private owner to fly and spent quite a significant time of his flight of 2:34 unsucessfully searching for wave.  The other pilots to exceed an hour in the air were Nora v G with 1:44 in Astir DPO and Stan and Peter Robinson with 1:01 in K21 JVZ, Nora's first flight in the Astir being of much shorter duration.

Saturday 15th.  Saturday was a generally cloudy day with a light to  moderate SE'ly as a weak cold front moved slowly SE, its passage leading to little in the way of change apart from a wind veer into the WSW.  With little in the way of soaring opportunities, it was a circuit day off runway 20, the day's 25 ATs generating no flights over an hour and only 5 over 30 minutes, the longest of these being by Jon May in his Ventus with 55 minutes.  Jon then offered Andy Parish a flight in his Ventus which was, of course, eagerly accepted. Another to breach the 30 minute mark was  Stuart Heaton who took one of 6 First Flight pupils of the day, Felicicy Lush, for 36 minutes in K21 JVZ off her Mile High flight.  Chris Booker started 3 ATs in his LS1  but only converted the last one of them into a flight due to a wheel retraction on the first and a wing drop on the second, the sucessfuil third leading to a flight of 32 minutes.  The highlight of an otherwise quiet day's gliding was the 1st solo of David Murgatrod, so congratulations to him.