The CFI announced another forecast of good conditions for wood and glass alike at morning briefing. The previous days events were reviewed; it had been a day when Slingsby Week entrants had dominated the flight logs and hours flown although YGC activity had continued as usual. Perhaps the highlight of the vintage flying was a one and a half hour flight in the T31, a glider rarely associated with extended soaring. Pilots Bob Bromfield and Mark Vowles  had a great time but had been cold with temperatures near to freezing at the high cloud base. In fact just about everyone who flew had reached 5000ft, a real plus so late in the season. Once Jerry H - Newton had received appreciation of his efforts in organising the quiz the previous evening he then was given custody of Henrietta for the next 24 hours. This iconic walking talking model hen is traditionally given to someone who is deemed to have transgressed at some time. Jerry's crime being to provide a quiz question the answer to which would have involved an entire annual flying hours flown in one day. Henrietta was presented to Slingsby week by Tony Maufe some years ago. He had acquired the hen at some rally in eastern Europe, this being typical of a somewhat unconventional (wacky?) individual we all miss. See below  -  Henrietta joined us for a drink in the bar after flying. 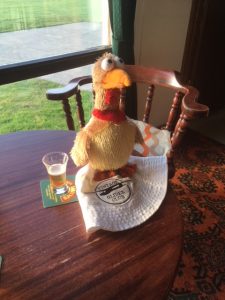 And so to the flying which was a mix of club and visitor activity in equal proportions with everyone enjoying reliable lift to a cloud base close to 5000ft  -  again! Over 40 launches, half by the old gliders, were logged which meant that the stalwarts running the launch point had a busy day as did instructors and tug pilots.  Without their efforts gliding would quickly come to a full stop and its a big thank you to everyone who helped. The syndicate DG1000T disappeared for over five hours with Bill Payton and Stuart Heaton sharing the controls. No doubt they covered a large area of Yorkshire in their flight. Justin Wills had popped in for a day or two to see what was going on and before launching in his state of the art machine he sampled a different type of gliding, having an hour in Russell Hardcastle's beautifully restored Meise. Both the YGC syndicate T21 and the visiting T21 had extended soaring flights, their occupants needing every item of cold weather kit as temps at cloud base were again on the chilly side.  YGC private owners to fly their own gliders included  Martyn Johnson in his DG800, Darren Lodge in the LS8, Rob Bailey in his ASG29 and Ron Beevers in the Nimbus. All these pilots flew cross countries of varying distances to disparate TP's. The final landing was about 6pm leaving just one space in the "down" column - this was the Oly 463 flown by Ryan Hobson who, after a very short flight in the morning, had taken off on his silver distance leg attempt. Everyone was delighted to hear that he had made it, landing at Burn after racking up 50+ kms.

A review of the previous day was kept short as Andy Parish promised even better soaring conditions. Was this possible? Yes it was.

Wine was presented to Ken Reid and Bill Cook who had flown their T21 to visit its birthplace -  that being the Slingsby works at Kirkbymoorside. Richard Lucas in the Dart had also taken his glider to pay homage to its ancestral home so he also received wine to mark the event. John Castle in his SB5 had covered well in excess of 100kms but unfortunately for him the wine supply had run out. However a couple of beers were presented to Ryan Hobson to mark his Silver distance in the Oly 463. Well done to him. Shame he also got custody of Henrietta for a day. Why? On greeting his retrieve crew at Burn he took them to the bar for a well earned drink only to announce he had forgotten his wallet. Yorkshiremen would understand!

Its difficult to know where to start summarising a day which provided great soaring opportunities for everyone whatever they flew. Initially just wisps of cloud indicated lift was available but by 1pm it was evident that things were GOOD and a long launch queue was dealt with very efficiently by the CFI and his team, three tugs being utilised at one point.

A good number of YGC private owners achieved x/c flights. Of these Martyn Johnson, Rob Bailey, Paul Whitehead and John Ellis flew 300kms and more round closed circuits. George  Rowden and Chris Teagle also exceeded 300km after joining up multiple legs of their flights. Confusing! Jim McLean flew a fast 100km during his flight of nearly three hours in the ASW24 and it was good to see John Shaw venturing further afield in the LS10 to record 150km on OLC. For more details on all or any of these flights see the BGA ladder and OLC records. For what must be a first for soaring achievements out of Sutton Bank, Bill Payton and passenger in the DG1000T KND flew round Blackpool Tower! after making their way there via Wharfedale and Bowland Forest gliding site. It was not easy to get back into decent conditions after turning this landmark and eventually they had to resort to the engine somewhere near Grassington. For all of you purists out there this flight does demonstrate there are great opportunities with an engine in the back to try something that would be close to impossible in a conventional glider.  All the YGC single seaters had lengthy soaring flights with the K8 flown by Phil Lazenby pottering round a few TP's to post 137km on the ladder. Deprived of his LS10 for the day Duncan Pask accompanied by Nick Gaunt took the syndicate T21 for a ride round the local area in their flight of one and a half hours. Too numerous to mention individually the entire fleet of vintage gliders taking part in the rally soared the skies over Sutton Bank throughout a day which delivered dream conditions for them  -  very light wind, high cloudbase and strong smooth thermals. A day to remember during those dark winter days.

After flying everyone assembled in the bar eager to find out if they had won one of the attractive prizes on offer in the grand raffle. Some lucky people waved their winning tickets in delight to claim chocolates, vouchers and bottles of wine. The winner of the BIG prize had gone home by then but all agreed that Liz was a worthy winner of the pampering day at the Fauconberg Arms in Helmsley complete with slap up meal etc. ( Liz was overjoyed when hearing the news later and never stopped smiling all day)  The proceeds of the raffle were added to those from the quiz earlier in the week plus donations from Slingsby week entrants  -  total £370 to be donated to the Yorkshire Air Ambulance. This sum was a fitting result for Margot and Jerry Henderson-Newton who had put a great deal of effort into these events. All who had taken part were grateful to them not only for the fund raising but also for the brilliant social atmosphere that had built up during the week.  Thank you Margot and Jerry.

PS: George will be back in the bloggers chair tomorrow so normal service will resume.  PL