Sunday 23rd.  A light to moderate NW'ly provided  a few isolated showers and led to operations off runway 02.  18 ATs resulted, with only one leading to a flight of over an hour and a further 2 over 30 minutes.  Rob Bailey in his ASG29 had 2:21 to record the only > 1 hr flight, while Toby Wilson with 48 minutes in his Standard Cirrus  and Malcolm Morgan and Jerry H-N with 35 minutes in the DG1000 were the two flights over 30 minutes.  The 6 First First pupils were flown by Kevin Kiely and Tony Drury while  John Carter and Mark Newburn took a high launch off the last flight of the  day in K21 JVZ but were back on the ground after 28 minutes.

Monday 24th  The light to moderate NW'ly wind was still in evidence at the start of the day but slowly backed into the W by the end, resulting in operations off runway 24 as high pressure dominated the weather.  RASP had indicated a short period of thermic conditions but, after a slow start, the expected early finish did not materialise leading to a spate of underset tasks.  Rob Bailey in  his ASG 29 flew 209 km, Paul Whitehead 194 km in his Ventus, Graham Morris, visiting from Nymsfield in his ASW27  flew 150 km and   John Ellis flew 133 km in his DG800.  Graham spent some time wave hunting  in his flight of 4:54, the longest of the day, but was unsuccessful in that regard.  TPs to the south  of Sutton were the most popular, but Jon Hart in his Vega, taking off late, visited Guisborough to the NE before crossing the North Yorks Moors to Malton and Pocklington before running out of lift and landing at Rufforth, covering around 150 km in the process.  As Rufforth had stopped flying, Dick Cole, flying the Pawnee, provided the AT retrieve.  The day's thermic conditions, with cloud base getting to around 4,500'asl, resulted in 18 of the 28 ATs of the day yielding flghts over 30 minutes with 11 in excess of an hour, the majority of these being by the 10 Private Owner launches.  However, Sue Aherne in the club Discus with 1:31 and John Carter and Rob Waddington in the DG1000 with 1:07 made sure club flying was represented.

Tuesday 25th.  An initially light to moderate SE'ly wind soon veered into  the SSW/SW and strengthened to become moderate to fresh, providing soaring opportunities.  Club members, First Flight pupils and the 10 private owners who rigged and flew took advantage and the result of all this activity was 20 launches, of which 14 exceeded 30 minutes  and ten of these an hour.  John Ellis in his DG800 and visitor Graham Morris in  his ASW27 both recorded 4 hrs in the air, with Chris Booker notching up 3:10 in his LS1 and Jesper Mjels 3:46 in his DG400.  However,  nobody ventured far from the site and only Martyn Johnson in his DG600 put a wave flight on the BGA ladder, with a peak altitude of around 10,000' asl.  There were no club single seater flights, but John Carter and Rob Waddington in the DG500 and John, this time with Roy Wilkins in K21 JVZ, had 2 of the flights to equal or exceed an hour, 1:20 and exactly an hour to be precise.

Wednesday 26th.  The wind had become a moderate to fresh WSW'ly with gusts into the mid 20 kts, but then moderated to become a light to moderate W'ly, so  that winching  was the order of the day off runway 24.  The initially blustery conditions seem to have put prospective pilots off, as a relatively quiet day ensued, the launch total reaching 10 before the last flight landed at 17:06.  One name dominated the flight log with Tim Pearson having  5 flights, mainly in K21 JVZ with either John Carter or Andy Parish, the list including a simulated low launch failure, one of the 3 flights to equal or exceed 30 minutes on the day in duration and a couple of short duration up round and downers too.   Steve Thompson in his Discus and Jesper Mjels in his DG400 were the only private owners to launch and provided the only flights to exceed an hour, Steve having 1:03 and Jesper 3:50.  Jesper visited Harrogate North and Wetherby South and contacted wave,  climbing to a peak altitude of 19,800' asl.  Colin Troise shared a flight with Dave McKinney of 46 minutes in K21 JVZ to top the >30 < 60 minute list.

Thursday 27th.  A light to moderate S'ly greeted those arriving for briefing, but the wind soon veered into the W and finally finished up a moderate WNWly.  The conditions led to a mixture of ATing and winching, the first 7 ATs being off runway 20 before operations switched to runway 24 as the wind veered.   ATing continued off runway 24 until late morning before winching became the preferred method, although there were a couple of late ATs bringing a total of 10 launches by this method, plus a self launch.  The day proved to be eminently soarable, with all the ATs leading to flights over 30 minutes, including 6 over an hour, and the 15 winch launches providing 13 over 30 minutes including 5 over an hour.  The ATs, however, were the preferred method of contacting the wave, with 8 of the flights by this method contacting and climbing to between 6,500' and 19,700' asl.  Steve Thompson in his Discus claimed a 14,800' climb as he attempted a double O/R to the Tyne Valley, but confusing wave conditions  led to Steve losing the wave over the Pennines and eventually landing out SE of Barnard Castle after covering around 150 km and having to resort to thermal boosted hill lift  to reach suitable fields for landing.  Steve's field is shown in the following photo, with Steve anxious to point out that the well defined wave cloud in the background only appeared after his landing. 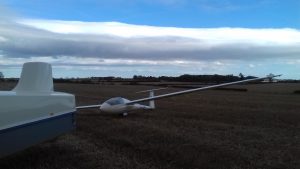 Visitor Graham Morris in his ASW27 claimed the top altitude of the day, 19,700' asl, as he covered 257 km visiting the Tontine, Harrogate North, Catterick, Wetherby South and Aysgarth.  Graham forgot to provide a low point on his trace after his AT dropped him straight into the wave, but a trip to the Tontine resuled in an altitude almost as low as his release point over Sutton before he recontacted the wave and started the rest of his cross country.  John Ellis in his DG800 climbed to 12,500' asl as  he shuttled between Leyburn and Wetherby while Chris Teagle in his Kestrel climbed to 10,377' asl and visited Grassington, Leyburn, the Tontine and York to cover 200 km.  Day course member Andy Hurst had a great introduction to soaring as  Stan and he took the DG500 to around 10,000' asl.  Even one of the day's First Flight pupils got into the act as Stan took him to 6,400' asl in their 35 minute flight.  The difficulties of contacting wave off a winch launch were illustrated by the fact that none of the day's launches by this method resulted in climbs of any magnitude, but Tim Pearson, Nick Gaunt  and Stuart Heaton/Albert Newberry all had over 2 hours soaring and Colin Troise and Chris Thirkell shared 1:30 in the club DG1000.

Friday 28th.  A weak cold front had travelled SE over the site overnight, leaving a legacy of clear blue skies which started to produce Cumulus by mid morning as a light NNW'ly blew.  Operations commenced off runway 02 around 1030 hrs and early reports of a lowish cloud base and difficult to work thermals led to original cross country tasks being reduced in scope.  In  the event, the day eventually produced a cloud base of over 4,500' asl and some strong climbs although conditions did  start to die by early afternoon.  7 of the day's 29 ATs led to flights in excess of an hour, with all these flights taking off between over lunch time.  Graham Morris in his ASW27 ventured south via Pocklington and Market Weighton to the Humber Bridge before returning to Sutton via the Tontine, covering 190 km in the process.  George Rowden flew a declared 167 km task with TPs at Scarborough and Beverley, the  cloud base on  the first leg to Scarborough being around 3,500' asl.  The cloud base dropped dramatically near the coast resulting in George flying over the top of a small Cu as he approached Scarborough, having left his previous climb at cloud base.  Bases then rose on leaving the vicinity of the coast with a convenient street on the Beverley/Sutton leg providing a 39 km straight glide as the cloud base rose to around 4,500' asl. Graham and George Goodenough in his Std Cirrus both had over 4 hrs of flying, while Phil Lazenby in the Ka8 had 2:10 as he ventured to Malton and back and Reg Rowlinson had 2:04 in Astir DPO.  Geoff Turner, the first pilot to soar, had 1:17 in Astir DPO, while the longest two seater flights were by Stan and Dave Westgate with 0:54 in the DG500 and 53 minutes by Andy Parish and Joan Wilson in K21 JVZ.

Saturday 29th.  Another blue sky start to the day as a light to moderate S'ly veered into the SW and strengthened to become moderate to fresh at times.  ATing off runway 24 produced 9 launches before the increasing wind strength and SW'ly direction led to change to winching around 1300 hrs, with 15 subsequently flown.  Hill lift, thermal and wave contributed to another good and interesting soaring day, cloud amounts varying significantly, with scattered clouds giving way to to well defined wave slots around lunch time and then a gradual diminishing of cloud amounts, eventually resulting in a virtually cloud free evening.  The 9 ATs led to  6 significant wave climbs to between 5,600' and 18,500' asl, the latter being by Graham Morris in his ASW27 as he flew 215 km around Masham, Harrogate North, Wetherby South, York, Catterick and the Tontine.  Ron Beezer climbed to around  10,000' asl in his Nimbus and George Rowden took Jill Potts, one of the 6 First Flight pupils of  the day, to 6,000' in their 41 minute flight.  Contacting the wave from a winch launch also proved to be reasonably easy, with 7 of the 15 launches leading to wave climbs to between 6,000' and 15,500' asl, the latter by Bill Payton and Nora v G in Bill's DG1000, their flight time of 4:49 being the longest of the day.  Tim Pearson, taking Astir DPO to 6,300' asl and Mike Collins taking the Ka8 to just over 6,000' asl both produced Silver C height claims, so congratualtions to them.  Kelly Teagle, one of the 8 private owners to fly on the day, took her Kestrel around Harrogate North and the Tontine, climbing to around 7,500 in the process and finding some strangely orientated wave bars.  Only one of  the day's flights failed to reach 30 minutes or more, but John Marsh flying another of the day's First Flight pupils still managed a climb to 5,600' asl in their 23 minute flight time in the DG500.  So a very good end to an interesting week of soaring at the YGC.