Sunday 16th.  The passage of a weak cold front delayed the start of flying until midday, the light to moderate SSE'ly becoming a moderate, and initially, a moderate to fresh WSW'ly.  Winching was the preferred launch method at first and 6 launches resulted, but only 2 of these led to flight times of over 30 minutes as the decreasing wind strength led to a change to ATing by 1430 hrs, with a further 7 launches flown off runway 24.   The best times off the winch were by Martyn Johnson and George Claydon, 57 minutes in K21 57 and John Carter and Toby Wilson with 31 minutes in the DG500.  John also featured in the shortest flight off the winch, 4 minutes, as well as the two longest flights from AT, all with Mark Newburn.  The first of the AT flights of 1:09 was in ridge lift and broken wave over Bagby and the second, the last flight of the day, lasted 1:23 in good wave lift over Byland Abbey that took them to 9,000' asl in K21 KLW, John's photo from this flight being shown below. 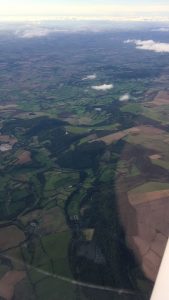 John Marsh  also made use of the wave on  the penulitmate flight by AT, taking the DG500 and his guest to 6,000' asl.  Jamie Quartermaine flew his ASW27 for 58 minutes off an AT while his syndicate partner, Mark German had 2 shorter flights off the winch.

Monday 17th.  Bright blue skies were in evidence as the hangars were unpacked, but by briefing they had been quickly replaced by a complete overcast that lowered below hill level and produced some drizzle and light rain.  These conditions lasted until after lunch, so the 3 members of the week's gliding course, David Stafford, Ben Gaunt and David Westgate had a theoretical introduction to gliding by Stan  via the white board in the briefing room.  Skies started to brighten after lunch and flying got under way just after 1400  hrs off runway 20 into a steadily increasing S'ly, the morning having had a light ESE'ly.  Initially the Eurofox piloted by John Ellis was used but as the wind increased it became increasingly turbulent on take off and landing, so Pawnee TM was used for the last 4 of the day's 10 ATs. Bits and pieces of lift over and to the south of the southern ridge suggested wave activity, but nobody managed a climb, the patchy lift only leading to 5 of the flights exceeding 30 minutes and none an hour, Stan and Ben Gaunt's 41 minutes in K21 KLW being the longest of the day.  Phil Turner and Mike Greenwood both flew Astir HVK, with Phil having 37 minutes and Mike making up for a shorter flight time by collecting a goodly pile of mushrooms for his dinner off runway 20.  Brian Wise took Alan Haley, the only First Flight pupil of the day, for 36 minutes in the DG500, while those at the launch point enjoyed some September sunshine and a temperature of 21C, as ex Hurricane Helene approached the UK