Saturday 1st.  The morning briefing was followed by a wrap up of Slingsby week by Director Phil Lazenby, who reported a great week of flying with hill soaring, some wave and cracking thermals to enjoy.  With the last day of the week to come, the Slingsby week attendees were encouraged to fly home and after Phil had dispensed bottles of wine for Friday's meritorious flights he  was persuaded to receive a bottle of wine for his 137 km flight the day before in the Ka8.  The Slingsby week wrap up was then followed by the delayed wrap up of the YGC Task Week.  Director George Rowden gave a summary of a great last day of Task Week, won by Andrew Clusky in his Shark with Tim Stanley winning the mug of the day, before announcing the overall winner, John Ellis in his DG800, after a close contest with Jon May in his Ventus.  A photo of John receiving the coveted Task Week winners trophy from George Rowden is shown below. 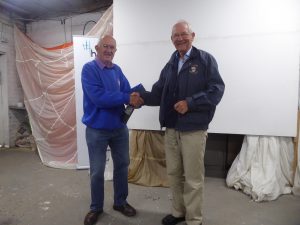 High/medium level cover with a light to moderate SE'ly dampened down thermic activty, the day only becoming soarable from 1400 to 1600 hrs.  this period leading to 6 flights of over an hour and a further 7 over 30 minutes.  Cloud base did eventually reach around 4,500' asl with visibility improving over the day but nobody ventured too far from the site and the 6 flights of over an hour ranged from 1:01 to 1:17, the three longest flights being by Chris Knapp in the DG303, visitor J Gayle in his Olympia 363 and Roger Burghall in his ASW20.    Andy Parish and D Martin ensured that the 2 seaters were not disregarded with a flight of 1:01.  The launch total on the day was 40, the majority by 2 seaters, including the day's 9 First Flight or Mile High pupils.

Sunday 2nd.  Mist in the Vale of York and high/medium cover greeted the day as a light to moderate ESE'ly blew, this progressively veering into the SW by the end of the day.  The cloud cover started to break up around lunch time with Sue Aherne  posting  the first of the day's 11  > 1 hour flights with 1:15 in the DG303.  Saturday had seen the arrival of a group of pilots from the Stratford GC for their regular autumn visit and one of their number, Barry Kerby, had the longest flight of the day, 2:50 in  his Duo Discus, Slingsby Week visitor J Gayle having 2:37 in his Olympia 263 and Neil Croxford in his LS4 having 2:32.  Soaring conditions improved as the high/medium cover dispersed with cloud base rising to around 5-5,500' asl, but nobody was tempted to venture cross country.   One of the day's 2 seater flights exceeded an hour, John Carter and Nora v G having 1:07 in the DG1000, but Kelly Teagle and Adam Sayer came close with 55 minutes in K21 KLW and Andy Hatfield took one of the day's 7 First Flight pupils for 53 minutes in the DG500.  Flying continued until just before 1800 hrs when the last of the day's 38 AT launched flights landed.

Monday 3rd.  A forecast of rain from a slow moving front affected member attendance, so the launch point crowd was dominated by First Flight and Mile High pupils, 8 in all, together with their supporters, and members of the Stratford GC.  In reality, apart from the high cover, it was a pleasant day for gliding, with smooth conditions and good visibility to start, although the latter went downhill after midday and low cloud put an end to flying around 1600 hrs, the last of the aircraft being wheeled into the hangars as the first of the rain fell.   The transition between the different conditions was marked  by a sudden change in wind direction and strength, light and variable to moderate N'ly, and a marked drop in temperature.  The change in wind direction and strength led to a change in runway use from 20 to 02, but only one flight took off from the latter before the low cloud resulted in the end of flying for the day.   Stan and George Rowden flew the First Flight and Mile High pupils while John Tayler flew two of his guests and Stratford visitor Richard Croxford had two early flights in the Astir before converting to the LS4, so congratulations to him.   YGC junior member Alex Patterson had two flights within the 16 on the day, with the day's 2 Mile High flghts recording the longest flight times of 39 and 41 minutes.