The forecast for the day was promising with conditions expected to be soarable later on. The previous days exploits were revealed at briefing. John Castle in his SB5b claimed the best gain of height after a gain of 4000ft in the wave before his hurried retreat back below cloud. Pete Storey in the Olympia 463 had managed to reach the A1 so along with John he received a bottle of wine for his efforts.

Andrew Jarvis, recently voted in as president of the VGC, had arrived the previous day and agreed to bring the rally visitors up to date with events and issues in the vintage movement. He informed the meeting of several changes to the VGC committee and outlined priorities he felt were important. On being asked about the relationship between the Glider Heritage Centre (GHC) at Lasham and the wider VGC movement he admitted that perhaps they were not singing from the same hymn sheet nor coordinating activity in the UK. It was on his list of "must do" actions to do what he could to improve matters. Concerns were expressed that the GHC was something of a closed shop to those outside its immediate catchment area - would it be possible to reach out to those who restored, maintained and flew the older gliders at clubs throughout the UK and maybe allow some of the flying examples at GHC to be seen and flown at other clubs. The discussion then moved on to the thorny question of the future of vintage gliding in this country and indeed of gliding in general. The problems were easy to identify - an ageing group of active pilots, more so in the vintage movement. A shortage of inspectors, particularly those with skills and and experience in wood repairs. Add to that ever increasing pressure on airspace, the high cost of gliding, especially at competition level, and conflicting demands on time due to family and work commitments. All agreed that solutions had to be found but there was no silver bullet to fix the problems.

The weather forecast proved to be accurate, the cloud clearing after midday providing sufficient heating to trigger thermals to c3500ft in the area. Club members and vintage pilots alike took advantage of the conditions and explored the local area with flight times ranging from half an hour to nearly three hours. This quickly dispersed the gloom that had pervaded at the earlier meeting! Of the 48 launches this day about half were by the older gliders including the YGC's own vintage machines - the K8 and the T21.

Wednesday:  Another day when soaring pilots had to wait until early afternoon before the thermals got going. After the CFI's briefing the previous days exploits were recounted and bottles of wine presented. Yet again the day eventually delivered good conditions, thermal lift to >4000ft in a light southerly allowing the club fleet of 2-seaters to ply their trade and vintage competitors to enjoy the delights of flying at Sutton Bank. Tim and Marion Stanley soared their " his and hers" gliders and one or two private owners flew shortish tasks.

At the end of flying 40 members and visitors enjoyed one of Liz's famous evening meals ( compete with pudding!) and went on to patronise the bar and attempt a fiendish quiz devised and run by Jerry and Margot Henderson-Newton. This was a test of memory and all round knowledge. A team of four worthy individuals (including your blogger) comfortably came out on top due mainly to the fact that some of their winning answers were actually inspired guesses.

The pic below shows a unique quartet of Swallows, all of which flew on this day and could be the only time ever that four Swallows (gliders, not the birds) were airborne at the same time at one gliding site. 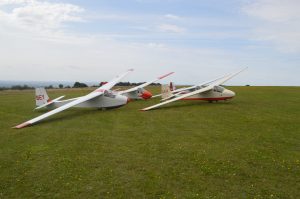