The moist Atlantic airflow continues to dominate so any plans Taskweek competitors had for adding to their points score had to be put on hold as, at the second briefing at midday, George scrubbed the day. The intial low cloud base lifted around lunchtime and the usual round of 2-seater flying continued right through into the evening  - see later. In addition to the 2-seaters there were a couple of shortish Astir flights in DPO and later Phil Turner converted to this glider  -  well done Phil.

Down on the ground the new spectator sport of Spot the Gliders had a group of members clustered round the screen in the foyer or glued to their i-devices. Mostly this was to watch competitors in the 2-seater comp out of Pocklington creep ever nearer to Sutton Bank under a barely soarable sky. Three didn't quite make it, landing in fields very close to YGC. The DG505 did land on top and, after a welcome cup of tea and a snack, had an aerotow to see them on their way back to Pock. During the afternoon the Spot the Gliders brigade had more entertainment watching Phil Lazenby getting ever lower well east of the site in the K8. Just as the odds had lengthened to 10 -1 on an outlanding he was seen to rise above hilltop height again as a thermal triggered by a combine not far below gave him 3 knots to safety and eventually home.

And so to the Tuesday night shift who went into action around 5pm. The two K21s and the DG500 were well utilised with fifteen flights between them including a re-solo by Steve Atkinson after a long layoff. ( See pic below)

Last landing was at 20-39 at deep dusk. This was the final Tuesday session of the year. Getting on for 30 members sat around in the bar afterwards to share reminiscences of what had been a very successful innovation. On behalf of the club and all present Paul Whitehead paid tribute to the group of regular and dedicated instructors who had put in so much hard work not forgetting the tug pilots and  ground helpers so essential to keeping the show on the road. Names are too many to mention individually but special mention did go to the driving force behind the Tuesday sessions  -  Steve Thompson. He will take satisfaction for all his hard work, not only for the flying successes but also for engendering a club and team spirit amongst new and longstanding members alike. 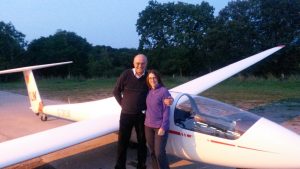 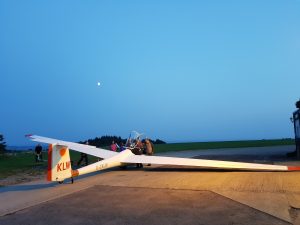 The forecast suggested that North Yorkshire would remain dry during the day before the passage of an approaching cold front. Cloud was expected to increase but the SW wind would give ridge and hopefully wave during the day. This more or less came to pass although the day was more cloudy than hoped from the start and the wave was elusive for all but one of the days flyers.

Taskweek competitors were set a task best described as "go anywhere, record it on OLC and try for height as well". Six of them did just that. Their feats were restricted to multiple beats along the ridge with the odd foray out to the west. The 7.8 eighths cloudbase never opened up sufficiently to present wave climbing opportunities but there was very weak thermic activity under it which helped pilots to extend their range. OLC showed distances flown in the 50 -90 km range but the scores on OLC bore little resemblance to taskweek results once George had applied his mysterious (devious?) algorithm to the claims. So, guess what, George won the day with his peak achievement turning the Tontine after leaving the safety of the home ridges. There were some mutterings about the result, not least George's admission that he took an aerotow in the direction of Boroughbridge ( well not quite that far) thus extending his overall distance and scrutiny of the rules revealed that  rule one states " The Taskweek leader shall not allowed to win" However he was forgiven as it seems unlikely he will be in pole position at the end of the week, top two spots presently occupied by Jonathon May and John Ellis. Apart from George and the two aforementioned, Chris Booker, Toby Wilson and Andrew Clusky submitted claims. Andrew, a potential new member if he passes the membership committee interview, took the opportunity to find out where Bolty reservoir is and then went back to check it out several times in his Shark 304S.

Other flights worth mentioning on this day included the first launch with the CFI taking Phil Turner up through an early gap into the wave reaching 4500ft until the gap began to close. On the day's second flight John Tayler and Diane set off to explore that wave gap but by then it was disappearing fast.  Phil Turners ride with the CFI did clear him for his second flight in the Astir later in the day. Paul Bulmer flew his Swallow a couple of times on the hill, hopefully getting ready to join in with other Slingsby gliders next week during the rally. Of 33 launches this day 25 were by aerotow and eight off the winch. The usual round of 2-seater flying took place with Stan doing much of the donkey work in the back seat. During the lunch break Colin Troise flew the K21 solo for an hour after stating he "couldn't be bothered to rig".

The indefatigable Jasper Mjels self launched his DG800 and disappeared for nearly four hours during which time he reached a height of 11700ft for a gain of about 8000ft.

The day was rounded off with Taskweek contestants and members enjoying one of Liz's famous dinners, conversation enlivened by wine kindly donated by Hill Aviation  Insurance Services -  the glider insurers of choice (ad)