A clearing cold front overnight resulted in partly cloudy skies, a brisk westerly wind and encouraging glimpses of blue sky and sunshine. With a forecast of some improvement as pressure rose during the day Andy Parish was glad to announce that a task would be set and the grid would be launched. The task was a Handicap task round three TPs to the east of the site into what was expected to be the best conditions available. After a couple of delays launching got under way at 1-30pm leaving competitors with the decision to set off straight away or hang around on the hill and in the local area until things got better. Down on the ground crews and the Northerns team gathered round displays of Spot the Gliders following progress, or lack of it, with interest. It was obvious that the day was going to be difficult with at least half the field delaying starts or eventually landing back after just a few kms down track. Five pilots made it round the first TP (Langtoft) with varying success in progress towards Helmsley, the 2nd TP. All five flew > 80km on handicap with Bob Bromwich  in his DG500M and Mike Bond in the DG800 eventually using their engines to return to S/Bank. That meant that Jack Stephen in the DG200, Steve Thompson in his Discus and Steve Codd in the K18 all made "proper" field landings. Jack landed on the old airfield at Wombleton finding that the main runway now has concrete blocks at each end with chains attached. He landed between them but this is a heads up to all of us who might contemplate dropping in there on the way back to YGC.

When circumstances allowed club members took advantage of the available hill lift. The first two to do this got an unexpected reward. John Carter, for the second successive day, took the K21 to 10000ft with Nora V G in the front and Dave and Andy Campbell went to a similar height in the other K21, this being Andy's first flight in a long time and justifying a day off work. Later in the morning Toby Wilson took the Club 303 into the wave, also around 10000ft.

In the evening a quiz challenged the grey matter of a good crowd of competitors, club members and crews. The winners were a motley gang of YGC members ( see pic attached) who probably  should have been penalised for a) having comparative youth on their side and b) exceeding the accepted maximum number of team members. Charlotte, who is running the bar in her usual friendly and efficient manner had organised a gin tasting night. This went down well (literally) and the author can testify to the merits of a rhubarb gin cocktail. Over £40 was raised during the evening for the Air Ambulance, later increased to £50 by a generous donation.

Pics below show the aforementioned victorious quiz team and Steve Thompson ready for t/off ( I WILL get back he said - wishful thinking!) 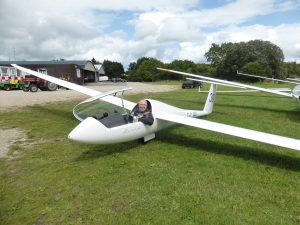 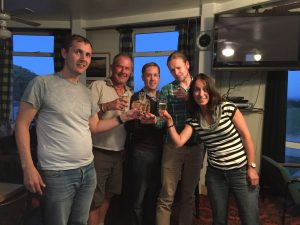 PS:  John Carter has sent pics ( below) of his wave flights to 10000ft on two successive days. Nora in the front seat. He is currently in Edinburgh where his daughter is taking part in the Fringe event but regretted he wasn't able to stay at YGC and get a hat trick of climbs. 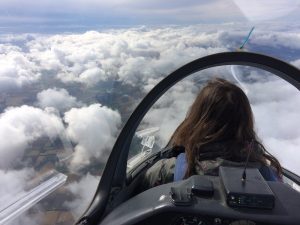 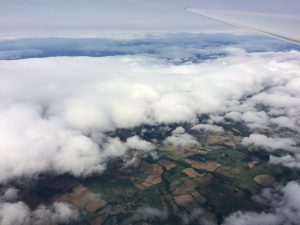