Well what is there to say other than this was yet another non-competition day as the very humid airstream out of the Atlantic continued to dominate the weather. A short two hour window around lunchtime did allow a few launches, mostly off the winch, in the club's fleet of 2-seaters. None of these flights exceeded half an hour although gentle hill lift did extend the flights somewhat. Graham Morris, no doubt frustrated at the lack of competition flying, took a winch launch early on and stayed airborne for about two and a half hours before he was last to land on the day. We have no record of wave contact or any distance flown but knowing his skills in maximizing conditions we surmise he probably escaped the local area and went west to where some Cu were evident. Good to see a visitor, albeit a regular, showing the locals how to make the best of conditions in the area

The last day of the Northerns and, guess what, another non-comp day. This time the air was a little less humid allowing flying to take place throughout the day under a mostly grey sky with the odd sunny break. With the hill working reasonably well flight times were extended in many cases to about an hour or so. Pride of place must go to Martyn Johnson who, not for the first time, showed us all how to do it by contacting wave to 12000ft for a gain of 10600ft utilising a wave slot upwind of the site over the A19 and managing to keep the ground more or less in sight during his three hour flight. John Tayler and Lee Grindrod on their second flight in the K21 also contacted wave and climbed to 4500ft later in the day.   Member Peter Goodchild launched in his Pik for a flight of over an hour in an effort to make up for lack of hours earlier in the week.

And so to the evening end of comps "do". Some of the competitors had left early to return to their clubs around the country. Those that remained, plus a lively contingent from Yorkshire Gliding Club, enjoyed a great evening of entertainment provided by vocalist and instrumentalist Roger Pugh.  He provided a variety of songs to please everyone accompanying himself on his guitar and another string instrument described a cross between a mandolin and a ukelele? During the interval Liam Watt and Toby Wilson took to the stage, Toby showing hidden skills on the guitar and a very passable singing voice. Liam joined in with what has been described as an "unusual" style of singing which was well appreciated by everyone. A further surprise was Toby singing a song in Polish - Stan and his family were present and confirmed they were able to understand the words easily. You will have to ask Toby how he became fluent in the language. Harping back to the "lively contingent" it has emerged this was largely due to the gang consuming a full bottle of gin in a short time. Hangovers tomorrow then.

George Rowden, taskmaster for the week, greeted the entrants and announced a task would be set with heights and distances shown on OLC qualifying for scoring. With a brisk westerly wind the intrepid entrants set out to clock up kilometers and try for some decent height gains. The winch was in use all day. First three on OLC were a trio of "Jons" with messrs Ellis, May and Hart claiming top spots in that order. Chris Booker, George Rowden, Toby Wilson and Les Rayment also had points on the board. Wave contact for several pilots was the highlight; Martyn Johnson for the umpteenth time managing the best climb of the day to 14000ft for a gain of 13200ft. Of task week competitors four pilots climbed to heights between 5000 - 8000ft enabling them to extend their range to gather kilometers. Perhaps the best, and unluckiest, attempt was by Chris Booker who landed out short of Sutton Bank after turning a number of TPs W and S of Sutton. He set off on final glide  with height to spare but had to airbrake under low cloud before meeting strong sink and coming to earth in a field favoured by the CFI in his field landing checks. ( See pic below) 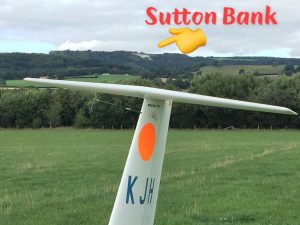 Only the 2-seaters and the Falke flew on another day of mostly low cloud with again a light wind from the SW. Stan with help from Paul Whitehead and Jon May occupied the back seats. In order to make further inroads into the backlog of trial flights Paul flew several of these in the motor glider. The task week contestants thus had a rest day giving them time to plan for big flights later in the week.