Saturday 7th.  A light to moderate NNW'ly slowly backed into the WNW over the course of the day with Cu blossoming relatively early but not leading to overconvection.  Consequently, it was a good soaring day with a plethora of cross countries to report from the 38 ATs off runway 02 on the day.  Derek Taylor flew 440 OLC kms in his ASW22, adding Carlton and Rufforth to his declared task of Rotherham, Masham and Pontefract, a 307 km task also flown by John Ellis in his DG800.  Rob Bailey in his ASG29 and Dave Latimer in his Ventus shared the same 1st TP, Scunthorpe, but then went there separate ways, Rob turning Saltby and Pontefract to cover 328 km and Dave, Southwell Minster and Burton on Swather a distance of 280km.  Dave then added on visits to Tontine and Pocklington to increase his distance to 416 OLC kms.  The above pilots all reported poor conditons south of Goole and north of Gainsborough with cloud base down to 2,500' asl and very murky conditions with conditions north and south of this band very good, cloudbase getting to around 6,000' asl. Those staying in the good condtions to the north of Goole included Jon May with 269 km in his Ventus, Martyn Johnson with 241 km in his DG600 and Jim McLean with 177 in his ASW 24.    Kelly Teagle, anticipating a repeat of the previous day's overconvection downgraded her original 300 km task to a 143 km one and wished she hadn't while husband Chris took their Kestrel around a 159 km task that included Pontefract and Carlton Moor.   Darren Lodge in his LS8-18 completed his first cross country of the year around the 100 km Pocklington/Rufforth triangle, while Toby Wilson had to give up on  his 5  hour attempt, during which he visited Rufforth and Sutton on the Forest, due to an uncomfortable parachute.  This was not a problem for Nora v G who completed her 5 hours and did a Silver height climb in the Astir, landing at 1725 hrs, so well done Nora.  In contrast to all the flights going to the south, Bill Payton and Stuart Heaton went west in their DG1000 and visited Cow Green Reservoir/Cauldron Snout Waterfall, Sedberge and Cross Fell in their flight of just over 3 hours. one of the 28 flights to exceed an hour, this list also including Mile High pilot Tony Waite who with George Rowden in K21 JVZ, climbed to 6,000' asl with help from a sea breeze front which approached the site around 1630 hrs.   Another 2 pilots on the > 1 hour list were Paul and Polly Whitehead who had 1:21 in JVZ as the did an O/R to Tontine.  Apart from 2 flights in the Falke,  the day's self launches included 5 by Derek Smith in his newly aquired DG800.

Sunday 8th.  Conditions had not changed very much from Saturday, the light to moderate wind now being from the NW and Cumulus blossoming mid morning.  However, the skies tended to cloud in after lunch and this, with the long flights undertaken on Saturday, led to more conservative flying today.   Peter Clay in his Ventus led the way with 197 OLC km, turning Market Weighton, Pontefract and Ripon, with Martyn Johnson covering 137 km in his DG600 with visits to Richmond, Masham, Castle Howard and Malton.  Rob Bailey, going for speed rather than distance flew the 100 km Rufforth, Pocklington triangle at 107.3 kph, while   John Ellis did a 104 O/R to Market Weighton in  his DG800 as did Chris Booker in the DG303 thus obtaining his Silver Distance and completing his Silver Badge, so well done Chris.   However, that wasn't the end of congratulations on the day as both Toby Wilson and Jerry Murphy  achieved their Silver C heights in the Discus and George Claydon obtained a Bronze C duration leg with 2:54 in the Astir.  All the pilots acheiving badge legs over the weekend were persuaded to have their photos taken and this is shown below, with right to left, Chris Booker, Jerry Murphy, George Claydon, Toby Wilson and Nora v G, the v G of Nora's name obviously standing for very Good. 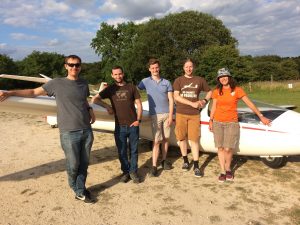 The day's 35 launches included 14 that yielded flights of > an  hour with a further 10 of > 30 minutes.  Two seater pilots also injoyed the day with John Carter and Andy Harper having 1:10 in K21 KLW while John also  had 1:07 in K21 JVZ with Nora v G, with Stan taking the majority of the day's 8 First Flight pilots for soaring flights.  The day didn't prove to be as successful for Steve Thompson, who setting off on a cross country in his Discus, had just enough time to dump his water ballast before landing out near Bylands Abbey.

Monday 9th.  A very weak cold front travelling slowly southward introduced some cooler air, a light to moderate N'ly wind, no rain but  cloudy skies that prevented any flying prior to midday.  Brightening skies thereafter, allowed 10 ATs off runway 02, but with no significant lift, only 2 of the day's flights exceeded 30 minutes, Bob Beck and Doug Wass having 36 minutes in K21 JVZ and Stan taking one of the day's 7 First Flight pupils for exactly 30 minutes in the same glider.

Tuesday 10th.  Cloud had spread back over the site overnight as a light to moderate NNW'ly blew, this slowly veering into the N over the course of the day.  The overcast, with a base of around 1000' QFE,  started to break up and lift by mid morning, the improved conditions allowing the day's launch total to reach 42 with the Tuesday evening group carrying on from where the daytime group had left off.  The improvement in the conditions meant there was some soaring and cross countries, although pilots reported strong but narrow and broken thermals and a cloud base of between 3-3400' asl.  Rob Bailey flew an O/R to Doncaster NW, 145 km, reporting  no improvement in conditions there, while Albert Newbery and Bill Payton had 2:13 in their DG1000t as the used their engine to get to the north escarpment of the North Yorkshire Moors, finding a combination of thermals and hill lift to maintain around 1,500 ' QFE, before using thermals to return to Sutton.  George Rowden and Graham Evison, flying their LS8-18 and Nimbus 2 respectively stayed relatively local and contributed the 2 other flights to exceed an hour on the day, with a further 9 exceeding 30 minutes.  Pilots in the latter category included Alan Beaumont with 56 minutes in the Astir, Mike Greenwood with 45 minutes in the same glider, John Carter and Phil Turner with 54 minutes in K21 KLW and Stan and Andy Davis with 44 minutes in the DG500.  The day also saw the first operations with First Flight bookings increased from 6 to 12 per day in order to make up the backlog caused by the poor start to the  year.  Stan was assisted in flying these visitors by Will Blackburn and Tony Drury, the operation proceding smoothly.