Monday 16th.  Early bright skies were soon replaced by cloudy ones as a front approached from the west and after 4 launches from runway 20 into a light S'ly wind, operations were delayed for a little while by the first of the day's rain.  A temporary clearance then allowed a further 5 launches before more general rain arrived, leading to another temporary halt in proceedings in the early afternoon.  This halt lasted until the middle of the afternoon when skies again cleared and a further 7 launches were flown before the end of flying around 1730 hours.  In all 16 launches were flown with the week's course members, Paul Frost, Alistair Brown and Martin Clowes, all having at least 2 flights with course instructor Bob Beck, and Stan and George Rowden sharing the day's 5 First Flight pupils between them.  Although there was some weak thermal activity at times, the generally low cloud base, typically 1200' QFE, mitigated against long flights with 26 minutes being the best acheived, both with First Flight pupils.  After the end of flying the site  a number of thunderstorms crossed the area, depositing some 13 mm of rain.

Tuesday 17th.  The overnight rain had freshened the site and left it in a light to moderate SW'ly, the Atlantic air mass resulting in a much cooler day with a maximum temperature of 18.6C.  The skies remained gererally cloudy but with some soaring opportunities as evidenced from the 2 flights than exceeded an hour and the 10 others that exceeded 30 minutes.  John Carter and Tony Kirby provided one of the > 1 hr flights with 1:03 in K21 KLW with Chris Haresnape the other, celebrating his conversion to the Astir with a flight of 1:12, so well done to him.  Best of the rest saw Stan and Peter Brockelbank have 57 minutes in the DG500, Stuart Heaton take the day's Mile High pupil for 54 minutes in the DG1000, it having returned from being the steed of Andy Parish in the Husband Bosworth 20m competition, and Tony Drury have 44 minutes in the DG500 with one of the day's 7  First Flight pupils.  Bob Beck and the gliding course members continued to amass flying time with each member having 3 flights, the 3 undertaken by 17 year old Alistdair Brown forming the basis for his subsequent first solo flight, so congratulations to  him.  A photo of Alistdair being congratulated by course instructor Bob Beck is shown below. 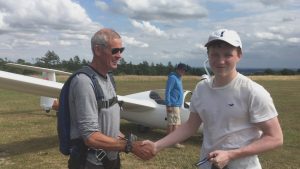 Wednesday 18th.  A light to moderate SSE'ly was accompanied by blue skies but a medium level overcast soon moved in from the SW but somewhat surprisingly did not result in a non-soaring day, as Cumulus started to form under the medium level cloud late morning and gave some strong thermals and a cloud base in excess of 5,000' asl by late afternoon.  The conditions led to some of the day's cross country pilots abandoning their declared tasks, particularly those to the W/SW where the overcast was thickest, and departing to better conditions to the NE,E and SE where a sea breeze front provided some reliable lift.   Rob Bailey took  his ASG29 to Guisborough and Filey before returning to Sutton, a distance of 159 km, using the good conditions over the east of the North York Moors and along the sea breeze front before penetrating the latter and doing a 32 km descent through sea air to Filey and back again, reconnecting with thermal activity in the Vale of Pickering.  Albert Newbery and Nigel Burke, flying Albert's DG1000, also flew to the sea breeze after passing Carlton and flew it to Kirbymoorside and Pickering before returning to Sutton, a distance of 84 km, claiming the best height of the day of 5,500' asl.  Steve Thompson and George Rowden both abandoned declared tasks and also went east, Steve turning Guisborough and Pickering to cover around 103 km in his Discus, while George visited, Northallerton, Carlton, the Tontine and Thirsk with an intermediate visit to Sutton to cover 136 km in his LS8-18, a couple of attempts to get further west being frustrated by the poor looking conditions to the west of the A1.  Most of the other 8 private owner flights stayed local but, together with the cross country pilots, were the main contributors to the 10 > 1 hr flights of the day, Duncan Pask having 3:39 in  his LS10, Poly Whitehead having 1:35 in  her ASW24 before syndicate member Jim McLean took it for 1:15 later in the afternoon and Dave McKinney flew for 1:31 in his ASW28.   Toby Wilson had shown the soaring potential of the day by having a midday launch and staying up for just under 2 hours as he flew a 77 km O/R to Guisborough via Carlton Moor , while later in the afternoon, Stan and Peter Robinson had 1:04 in the DG1000 with course member J Johnson just missing out on an hour's flight with 50 minutes in K21 KLW with Bob Beck.  The day saw the arrival of a visitor with K Bates from Pocklington landing around 1500  hrs, but the solo success of Bob Beck's course continued with Paul Frost going solo in K21 JVZ, a photo of Paul with Bob being shown below, so congratulations to Paul. 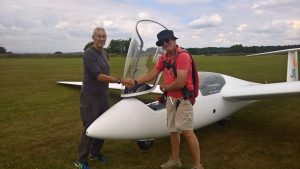