Tuesday 26th.  The high pressure, with its centre to the NE of the UK, continued to provide blue skies, light winds and high temperatures, 27.1C being the day's maximum after an overnight low of 14.3C.  However, the inevitable temperature inversion meant that usable thermals were hard to find during the morning but were present in blue form from around midday with Mike Greenacre having 53 minutes in the DG303 after taking off at 1226 hrs.  From early afternoon a short stretch of cumulus could be seen to the north of the site and this was utilised by a number of pilots who not only notched up the majority of the 5 flights to exceed an hour on the day, but also recorded climbs to between 5,500 and 6,000' asl.  Frank Wilson, flying the DG303 was the first to utilise this area of lift, which appeared to be some sort of stationary convergence, logging a flight time of 2:11, while Rob Bailey in his ASG29 had 2:20 and George Rowden in his LS8-18 1:54.  Rob and George used the lift to do O/Rs from Sutton to Carlton Moor, George flying two of these and  then adding on an O/R to Helmsley to cover 100km.  George found the air mass east of Sutton to be completely flat, only finding some instability on returning to site.   The day was also marked by the return of the repaired K21 JVZ and John Carter and Derek Taylor towed out to the convergence, climbed up to just under 6,000' and then did a thorough test flight including aerobatics and flying at Vne before returning to site after a flight time of 51  minutes.  Photographs of JVZ  after rigging and the view from JVZ when over 5,500' asl in the convergence are shown below courtesy of George Rowden and John Carter. 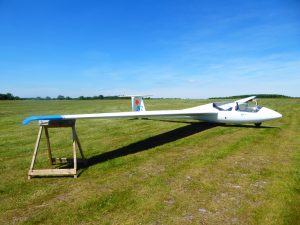 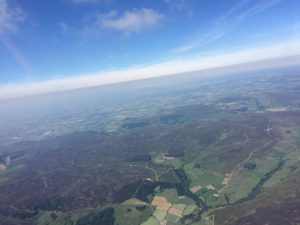 The pilots who went north from Sutton, inlcuding Duncan Pask who had 1:29 in his LS10, fared somewhat better than those who went south, the latter comprising Albert Newbery and Paul Frost in Albert's DG1000t and Andy Parish/Tony Wiseman in the club DG1000.  Both found lift hard to come by in the blue with Albert and Paul doing an  O/R to York after a stuggle with bitty climbs, while Andy and Tony had to call it a day in there search for usuable lift and land out at Rufforth, returning to Sutton later via an AT retrieve.  Come 1700 hrs, the Tuesday evening group took over and continued flying until 2132 hrs, by which time the launch total  was 40, including 7 First Flights, while to this total were added 4 flights in the Falke.

Wednesday 27th.  The only subtly changing synoptic situation meant it was another day of blue skies, high temperatures and light winds, the latter slowly backing from the ESE to the ENE over the course of the day.  As with Tuesday, shallow cumulus appeared to the north of the site in the early afternoon, and while not providing the same in terms of maximum operating height, with 4,900' asl being the peak reached, it did allow John Carter and Tony Wiseman to have the only flight of over an hour, 1:10 in the DG1000.  Andy Parish took his First Flight pupil there in K21 JVZ but as circling was not to her liking, returned to site after a flight time of 46 minutes.  The only other flight to exceed 30 minutes saw Stan take the day's Mile High pupil for 37 minutes in the DG500.  John Carter, Geoff Turner and Colin Troise all flew solos in either K21 JVZ or the DG1000, while Tim Pearson did in the Astir,  but none of them troubled the timekeeper much on a day when up, round and down was the norm.

Thursday 28th.  Blue skies and light winds from the SSE signalled another anticyclonic day, with those at the launch point taking advantage of the shade from the launch cabin as temperatures peaked over 25C.  Hopes of another repeat of Tuesday and Wednesday's cumulus marked convergence to the north of the site were unfulfilled as the sky remained resolutely blue, except for some streaks and patches of Cirrus, and the day's early flights were through calm air.  Instability below 2,000' QFE became noticeable around lunch tim,e but apart from a couple of flights later in the afternoon, did not result in much of an extension to flight times. Steve Thompson did manage of flight of 41 minutes with his Mile High pupil and later, from a lower tow height, did find a thermal over Kilburn  that resulted in a climb from 900' to 2,500' QFE extending his flight time to 37 minutes in the DG1000 with one of the 6 First Flight pupils of the day.  The only other flight to exceed 30 minutes from the 13 flown on the day off runway 20,  saw Colin Troise have 38 minutes  flying the DG1000 solo.  Mosst of the day's tows were  done behind the Eurofox 120 hp demonstrator, but engine problems led to the Super Cub taking over tugging duties for the last few launches.