Saturday 2nd.  A thundery front travelling northwards brought a morning of heavy  rain and an afternoon of low cloud that meant there was no opportunity to fly.  Consequently, the highlight of  the day was culinary in nature as the remains of Friday's feast again found willing consumers. 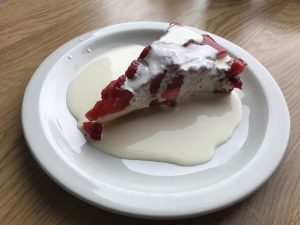 Sunday 3rd.  After Saturday's rain, the weather reverted to type with a light NW'ly being accompanied by a low overcast coming in off the North Sea.  Although the weather shows signs of brightening in the afternoon,  the improvement was only temporary and did not allow any flying to take place.

Monday 4th.  Little change in the synoptic situation meant little change in the local weather, with the wind now a light to moderate NNW'ly and a continuation of a feed of a low overcast off the North Sea.  This showed no signs of breaking up at all, so it was another non-flying day.

Tuesday 5th.  Subtle changes in the air mass which continued to flow in from the NNW, meant that the cloud sheet was higher, allowing flying to get underway just after 1000 hrs and, with the Tuesday evening group active, continuing until the landing of the last flight around 2130 hrs.  The cloud sheet also started to break up during the morning and this process continued during the rest of the day, with completely blue skies by mid-afternoon, these continuing till after the end of flying.  The end result was a busy day at the launch point, with 45 launches off runway 02 and some soaring flights, mainly by the 5 private owners who rigged.  A collective decision was taken to investigate the possibility of soaring the north escarpment of the North Yorkshire Moors and John Ellis in his DG800, Stuart Heaton with Bill Payton in their DG1000 and Rob Bailey in his ASG29 were all rewarded with soaring flights of between 2:04 and 3:35.  With an absence of thermal activity to provide a means of getting back to site, most used their engines to return to Sutton, although Rob Bailey decided to visit Helmsley and Thirsk as well.  Steve Thompson, also heading north in his Discus, took a high tow and ran into some weak wave over Hawnby, this took him up to around 4,500' asl from which height he pushed further north to Carlton Bank where more gentle lift was found, allowing  him to regain his lost height.  Declining to join those hill soaring below him, and without any supplementary means of staying up, Steve returned to site after a flight of 2:08, occasionally receiving Flarm indications of Duncan Pask and his LS10  who was soaring weak wave over Osmotherly before he  returned to site after a flight of 1:20.  Those remaining local to the site included the members of  one of the year's gliding courses, and while nobody managed to stay up for an hour or more, there were 12 flights of over 30 minutes, with Graham Taylor having 55 minutes in the Discus, Sue Aherne having 48 minutes in the same glider, John Carter and Tom Wiseman having the same time in the DG1000 and Dave Campabell and course member Dave Worrel having 46 minutes in K21 KLW.  The Tuesday evening group then took over operations and found some weak wave either just upwind of the site or just downwind of the S'ly ridge, the latter allowing a height of 1500 to 2000' QFE to be maintained which John Hart in his Vega utilised in his flight of 1:40.  Steve Thompson and Alan Beamish had 40 minutes in the DG1000, Steve and Richard Ackroyd  39 minutes in the same glider and Steve and Dave Murgatroyd 38 minutes, again in the DG1000.  Tugging duties were intially by Pawnee EV, but with the arrival of the 120 hp Eurofox demonstrator, this was used for the majority of the day's tows, its performance off runway 02 into a light wind being favourably compared to the Super Cub.  Some photos of the demonstrator towing K21 KLW  are shown below, courtesy of Phil Lazenby. 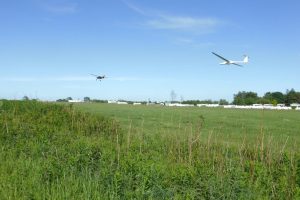 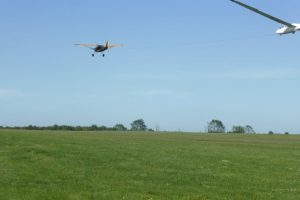 Wednesday 6th.  There was no apparently significant change in the weather situation but the low overcast had returned overnight as the wind continued to be a light to moderate NNW'ly, with a tendency to back into the N.  A brief period of brightness mid-afternoon allowed course member Howard Short to have 2 short flights in K21 KLW with John Carter but that was  all of the flying possible on the day.

Thursday 7th.  The light to moderate NNW'ly wind continued to blow and bring in a low overcast of the North Sea.  A cloud base of 1200' QFE was deemed suitable to start flying just before 1100 hrs, but the limited launch height meant flight times were clustered around 10 minutes, although Andy Parish and John Dore found a weak thermal downwind of site that extended their flight time to 25 minutes.  The overcast started to break up around 1400 hrs and this process continued quite rapidly to yield completely blue skies by 1600 hrs, the course members taking advantage of the conditions to have multiple flights.  Some thermal soaring was possible with a cloud base of around 3,000 asl and Steve Thompson managed to eke out a flight of 1:16 in his Discus, the only flight of over an hour on the day.  There were, however, 5 flights of over 30 minutes with Graham Evison and M Wallis having 44 minutes in the DG1000 closely followed by George Rowden and Mile High pupil Nick Forder, again in  the DG1000.  George and Nick made use of some lift in the lee of the S ridge to extend their flight time, no doubt the same phenomonen as earlier reported to have been used by the Tuesday evening fliers.  Others to have extended flight times included John Carter and Tony Kirby with 37 minutes in K21 KLW.  All the tows on  the day were undertaken by the 120 hp Eurofox demonstrator, the 4 Trial Lesson pupils flown on the day all appreciating their first experience of gliding.