Saturday 16th.  An intially light to moderate SW'ly slowly increased in strength to become moderate while varying between SSW and WSW.  The day was generaly cloudy, with the cloud thick enough to generate regular showers and low enough to prevent any glider flying until late in the day, when John Marsh flew first with Phil Turner and then with Andy Hatfield  in K21 KLW off the winch.  Both flights, the first of 21 minutes and the second of 31 minutes found the hill working and the presence of wave, but descending darkness put an end to flying at 21:48 hrs.  The low cloud base was not however a problem for the Falke which had 3 sorties as Bob Beck took Phil Turner, Simon Altman and Nora van G for some flying practice.

Sunday 17th.  A light to moderate SW meant it was another hill soaring day with winching the launch method.  18 launches resulted with 12 flights over 30 minutes and 2 equal to or greater than an hour.  Tor Tavener and Roger Burghall were the only private owners to rig and fly, Tor having 53 minutes and Roger 25 minutes in their ASW20.  Paul Whitehead and Don Austin had 56 minutes in the DG500, while Malcolm Morgan had 52 minutes in the Discus, Chris Booker later taking the Discus for an hour.  The sob story of the day however was played out by Toby Wilson who, attempting to complete his Silver duration, stayed aloft for 4:48 before making the correct decision to land as the hill lift faded.

Monday 18th.  The briefing room was a-buzzing as the forecast and the view outside combined to promise a great day's wave soaring and so it turned out to be.  A SW'ly wind of variable strength, and the option of winch or AT launches plus a wave cloud filled sky, led to a busy launch point, with 16 pilots opting for an AT and 28 for winching, with all the pilots taking AT's  contacting the wave and the majority of the winch launched pilots.  Some spectacular lenticulars were present during the morning but disappeared by afternoon, with the wave marked by lower level cloud for the rest of the day.  Many pilots remarked on the large blue gap downwind of the Pennines which nevertheless still had strong blue wave within it.  The morning's lenticulars are illustrated in the following photos from Mark Newburn and George Rowden. 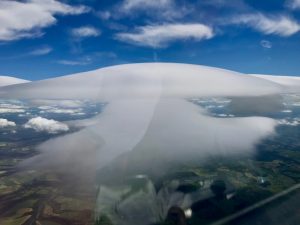 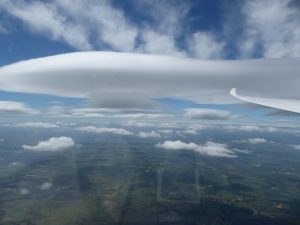 Mark also provided a nice shot of the Discus in the wave which is shown below. 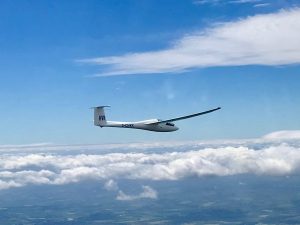 21 of the day's flights climbed to 7,000' asl or more, with Jesper Mjels climbing to 19,500' twice in his DG400 and Lindsay McLane also reaching that altitude in  his Ventus.  Lindsay was returning from a visit to Keswick, where he found 7/8s cloud and much weaker wave lift than in the lee of the Pennines, and it was on returning to the Vale of York that he found a hot spot that took him to his peak altitude within the large blue gap mentioned earlier unmarked by low level cloud but by a lenticular around 15,000' .  On completing the climb, Lindsay use his height to visit Scarborough before returning to Sutton, his overall flight distance being approximately 380 km.  John Ellis set a 500 km wave task but abandoned it on the way to his first turn point due to extensive cloud cover and reverted to a 211 km task which he completed in his DG800 at a handicapped 118 kph.  Jim McLean took his ASW24 around numerous Yorkshire TP's covering 278 km in the process, while George Rowden flew to Masham and  then completed the club 200 km wave task at a handicapped 111 kph in his Ls8-18 and then added on another 147 km with a Sut/Tontine/Burn/Sutton task to cover 378 km in total.  Others to explore the locality included Jon  Hart in his Vega who decided to do a high level 100 km around Pocklington and Rufforth and then visited TPs to the west and  north of Sutton to clock up an approximate 278 km on the day.  Examination of Flarm traces on OGN also revealed that Nick Gaunt did around 300 km in his LS7, Ron Beezer did around 160 km in his Nimbus and visitor I Freestone did around 150 km in his Pik20E.  Apart from most of the pilots mentioned above, those climbing to above 10,000' asl included Phil Lazenby in the Ka8, 11,000', Nigel Burke in his DG600 , 10,100', Mark Newburn in the Astir, 11,100',  Darren Lodge in his LS8, 10,700' and Will Blackburn,  who took some of the day's 6 First Flight pupils to similar heights in the DG500.  While most of pilots found the wave easy to contact, Andy Parish found the reverse and pushing forward found he and his pupil in the DG1000 having to take the option of landing at Bagby, with an aerotow subsequently returning them to Sutton.  All in  all a great day's flying and one that deserved the accolade "you should have been here".